Check this out:
Pseudo-Synesthesia through Reading Books with Colored Letters

Non-synesthetes were given specially prepared colored books to read. A modified Stroop task was administered before and after reading. A perceptual crowding task was administered after reading. Reading one book (>49,000 words) was sufficient to induce effects regarded as behavioral markers for synesthesia. The results of the Stroop tasks indicate that it is possible to learn letter-color associations through reading in color (F(1, 14) = 5.85, p = .030). Furthermore, Stroop effects correlated with subjective reports about experiencing letters in color (r(13) = 0.51, p = .05). The frequency of viewing letters is related to the level of association as seen by the difference in the Stroop effect size between upper- and lower-case letters (t(14) = 2.79, p = .014) and in a subgroup of participants whose Stroop effects increased as they continued to read in color. Readers did not show significant performance advantages on the crowding task compared to controls. Acknowledging the many differences between trainees and synesthetes, results suggest that it may be possible to acquire a subset of synesthetic behavioral traits in adulthood through training.

To our knowledge, this is the first evidence of acquiring letter-color associations through reading in color. Reading in color appears to be a promising avenue in which we may explore the differences and similarities between synesthetes and non-synesthetes. Additionally, reading in color is a plausible method for a long-term ‘synesthetic’ training program.

Do any programmers here want to take a free ebook (of over 49,000 words) from the Gutenberg Project and colorize the letters? If not, I’ll try to write a script to do it.

I’ve already created a number synesthesia training sheet, if anyone wants to experiment with this idea applied to numbers.

I used the colors from the Wikipedia example, but will make one with adjustable colors if anyone is interested. I’d like to redo it with my mnemonic images for colors.

2 Likes
Synesthesia training
Is it possible to gain the method of loci synthesia,Edit-Yes it is see Virtual Memory Palaces along with text
Has anyone here successfully trained synesthesia
Josh (Josh Cohen) November 13, 2018, 7:03am #2

I’m looking for colors to use in the grapheme-color synesthesia training script. So far I’ve found these examples:

Many of us have had the experience of unusual associations between our senses and our memories.  Perhaps a certain smell unexpectedly reminds you of a grandparent, or certain foods evoke memories of old friends.  Associations between...

question for people with grapheme-color synesthesia! what colors make up your...

this is a question for all you synesthetes out there! what color is your alphabet??? here is mine, in case anybody wants to know: a- sunflower yellow b- gold c- sky blue d- chocolate brown e- forest green f- lime green g- dark blue h- red i- lemon... 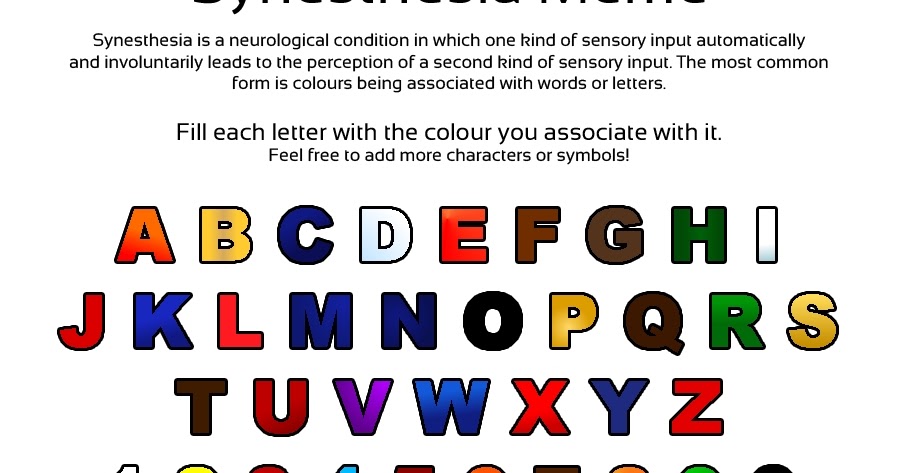 A blog about indie publishing, urban fantasy, and geek culture.

The interesting experiment will be: after training with colored numbers for a while, would a person be able to see the word by glancing at a sheet of numbers like in the "2"s and "5"s at the bottom of this page:
http://www.behance.net/gallery/synesthesia-life-in-colour/240215

I’m supposed to read The Trial by Kafka, but I don’t know if I’m going to have enough time to write the script by the deadline in two weeks. I’m thinking that a page of text like this could be run through a PHP script, but I’m not a programmer and don’t know all of the functions that I would need to use:

The Trial by Franz Kafka

Would one just read the file and then use switch-case statements for the 52 letter forms and 10 digits before outputting the text with HTML <span> elements? It would be nice if the script would remove new lines within paragraphs but not between paragraphs. Maybe I will try to find someone on odesk who will write the script.

The Trial is over 87,000 words, so it should be enough to have some effect, according to the study results.

This seems like a good site too http://otherthings.com/uw/syn/ with several more links.

In PHP i would do what you have written. To remove enters in paragraphs, remove all enters and then replace the " " at the beginning of the paragraphs with two enter.

If you have windows you could also just define a bunch of replaces (letter -> span+letter) in powershell ISE like this:

Thanks – I will look into that method.

The article is very interesting…

This first version uses the colors I mentioned above:
https://artofmemory.com/3.1415926/t/decimal-synesthesia-1.php

This next version uses colors from my mnemonic system for colors, in somewhat pure versions. I don’t think it looks very good though.
https://artofmemory.com/3.1415926/t/decimal-synesthesia-2.php

Thanks… I’ve been working a a variation that matches match my mnemonic colors here, using shading:
https://artofmemory.com/3.1415926/t/decimal-synesthesia-3.php

And just added one with the new colors you suggested:
https://artofmemory.com/3.1415926/t/decimal-synesthesia-4.php

I’ve been increasing the size of the fonts with ctrl+ in Firefox to make the colors clearer.

I’m starting to get another idea – what if there were a Firefox extension that colorized text on webpages? This would provide daily reading in color.

I’m starting to get another idea – what if there were a Firefox extension that colorized text on webpages? This would provide daily reading in color.

I thought about that too.

Background color could be a problem but probably you can add shadows if needed or maybe there are not that many sites with non white-ish background.
And then you just replace every letter outside the tags with the span+letter. And then start to debug and hack…

How about a Pocket app:
http://getpocket.com/developer/

Pocket will strip out all of the HTML and format it nicely. Then the formatted content could be fetched with the API and colorized before exporting in epub or PDF format.

I will take a closer look at this later. If anyone is interested in reading colorized text, let me know.

Once it’s output to the webpage, it can be converted to PDF and read on an ebook reader. (See attached file.)

I’m still adjusting the colors to get a better balance.

If anyone would like some public domain texts colorized, just let me know. I’m using Gutenberg Project to find public domain works. I will read Kafka’s The Trial this way as my first experiment.

I’ll also open-source the PHP script on github if anyone would like to help improve it.

My thinking is that the lighter colors should be used on less frequent letters:

The frequency of letters in text has been studied for use in cryptanalysis, and frequency analysis in particular, dating back to the Iraqi mathematician Al-Kindi (c. 801–873 AD), who formally developed the method (the ciphers breakable by this technique go back at least to the Caesar cipher invented by Julius Caesar, so this method could have been explored in classical times). Letter frequency analysis gained additional importance in Europe with the development of movable type in 1450 AD, where...

It might also be interesting to have vowels stand out in some way.

Really great stuff…
My first guess is that it would really help. First of all new stuff is always good to learn.
Colors will be nice to get used to and well yeah it adds a whole new layer to writing.
what if certain color combinations in words would also have some meaning.
Like lots of dark colors would mean something sad and bright something happy…
there’s so much stuff to play with…

and i wonder how you will do on a stroop test after this!

I’m looking forward to this project. I just can’t see the colors well with my phone’s small text, so I might limit each line to maybe 50 characters, or try to read on my computer screen even though the computer tends to be distracting.

If you have ideas on different colors or improvements to the script, just let me know.

It would be interesting to slightly tint the colors based on whether they fell into a certain category based on their emotion, but that would probably be very time-consuming to set up.

I’m thinking about making an upload button since it’s time consuming to use FTP, and I’d like to open it up. Once uploaded, people could print the text as PDF, or maybe convert into epub format if I could figure out how to do that.

I’m a bit stuck with the decision-making:
[link expired]

Is there enough blue or orange?
Are the oranges of the V and K, or the reds of T and M going to create an association between those letters? And if so, are there better ways to associate letters with each other? For example: B and P are phonetically related, and are also similar to F and V. Would it be better if those colors were similar?

Maybe the vowel colors here should be more “harmonious”? Many vowels occur next to each other, but with this color scheme, they clash.

I’m just thinking out loud in case anyone has any suggestions. I’ll work on it more tomorrow.

I’ve been working on it a little bit more. I’m trying to get it so that the vowels are warm yellows and browns, and then the color of the consonants gives the word a quality that is sort-of based on the sound. (First screenshot is an example.)

My thought is that the colors could highlight features of the language, especially when reading poetry.

The guidelines I’m working with:

Another idea would be to make the colors based on sounds and not letters, but that would be a bigger project. It would need a phonetic dictionary like this:
http://www.speech.cs.cmu.edu/cgi-bin/cmudict

I think I’m as close as I’m going to get. Final colors attached…

EDIT: and some output:
[link expired]

Almost all of the files are public domain writings that are in blank verse, because due to the way the script was written, if the lines don’t have breaks, they split in the middle of words. I would have to update the script to avoid that problem, so this is easier for now.

I won’t leave those samples online permanently, so if anyone wants to read them, save them to your computer.

Just adding an article about alphabet coloring. Relevant part is from page 17.
A Colour Alphabet and the Limits of Colour Coding

Thanks… I’ll check it out.