What is the best approach to learn new vocabulary of a second language using a palace of memory?

Are you using the new word with the translation to your main language and the meaning in a single loci?
do you use more than one loci? do you store a story with the words? do you use fonetic associations? visualizations?

Thanks for your sharing, I’m very new in this realm and there are lots of different opinions in the web what confuses me a lot.

For this reason I’d strongly suggest instead: some flashcard system (active recall is essential; spaced repetition systems are best) along with trying to find linguistic reasons for the associations.

In this way I learned Spanish and Portuguese vocabulary very easily. Of course, grammar and conversation skills need to be trained in addition to whatever you do with vocabulary.

Thanks @Daniel_360 for your input

Thanks for your sharing, I’m very new in this realm and there are lots of different opinions in the web what confuses me a lot.

It’s not so much different opinions as it is different approaches. You say that you are new to this, so you probably don’t have much (maybe none at all) experience with memory palaces. Your “opinion” on the matter will thus be very different from mine.

Imagine there’s a store 10 minutes walking distance from where we are. Is it faster to take a car or just walk? Depends, if you don’t have a car then walking is definitely faster than buying a car first… or worse yet, having to get you drivers license. If I got my car parked right there, it’s obviously faster for me to take a car instead of walking for 10 minutes.

Generally, I agree with Daniel’s conclusion here; however, memory palaces and SRS are not mutually exclusive. Let’s assume you do in fact have a car and know how to drive it. When does it makes sense to use memory palaces? Say your L1 is any Romance language and you’re trying to learn English… great, it’s “the” either way. How about the other way around? How do you know if the grammatical gender is masculine of feminine? Simple, use two separate memory palace to store them.

Of course you still need to learn what’s in these two palaces using spaced repetition. Also just using the two MPs for nouns in this scenario.

Are you using the new word with the translation to your main language and the meaning in a single loci?

Yeah, don’t do that… couple of examples why that’s a bad idea:

…and lots of other minor stuff like Earth-apple as in the French pomme de terre which doesn’t work in English, but you could get away with it in German with Erdapfel (Erde = Earth, Apfel = apple) and depending on the region people might think nothing of it or wonder why you’re using that instead of Kartoffel (potato as per the dictionary). Kinda like carro / coche in Spanish.

do you use more than one loci? do you store a story with the words? do you use fonetic associations? visualizations?

That’s really just a matter of preference. Not quite asking should I use a blue pen or a black pen to write the words down, but not far from it.

Let me assume for a minute that you are already familiar with memory palaces and that’s not the issue. Here’s how I’d say you should approach French if your first language is English over the course of one week.

Start on a weekend and end on a weekend. On Saturday familiarize yourself with the basic grammar of the language and just read over how to build all the tenses, personal pronouns, etc. Don’t try and memorize but just get a general idea, so you’ll know where to look for things later on.

Have a memory palace with 200 locations and a frequency dictionary with the 1,000 most common words. First night 1-200, next morning you review by just walking through your MP. I assume that’s also what @Daniel_360 means by “active recall”… don’t just read over the 200 words in the dictionary again. Next night, 201-400 in the same palace and just replace the images you had from the previous day. Do that for five nights/mornings total for the first 1,000 words.

That puts you at Thursday if you pre-read the grammar on Saturday and start the vocab on Sunday. Use Friday to have a second look at the grammar with the vocabulary you have available now. You’ll find that the top 10 verbs allow you to do a lot of “stuff” already. The problem with the tenses will be that you’ll know the words avoir and être but not all their different conjugations to build the different tenses. That’s no different from to have and to be in English though when you think about it. If you only know the infinitives “He’s been running.” is basically just “He (to) be (to) be (to) run” at this point.

On Saturday, review 1-500 and on Sunday review 501-1,000 again. What you don’t remember yet goes into some SRS software or on flashcards as per what Daniel’s describes above. That’s it, done!

Week 2 and 3 is then Netflix, DVDs, etc. Find a 20 minute Sitcom you like… doesn’t matter, could be French dubs of Friends, Will & Grace, Big Bang Theory, etc. at night watch the English audio with French sub titles and just read along with the subtitles. The next morning you watch the same episode in French. Use French subtitles If you want to, but definitely don’t use English subtitles.

At the same time spend some the next two weeks looking over the aforementioned conjugations and other common verbs like make, do, etc. At the start of week 4 you’ll now have a pretty decent idea of what the language should sound like, common interactions between people, etc. Spend the next four weeks on vocab 1,001 - 5,000 and in week 8 review 1,000 a day Mon-Fri (i.e., all 5,000 words) and put whatever is still “unknown” into your SRS software or on flashcards.

This approach will basically put you at an A1 level after the first week, A2 at the end of the month, and B1 by the end of the second month. Spend the third month reviewing you leftover vocabulary from the review in week 8 and turn off the subtitles when you watch your sitcom(s). That should put you at B2 by the end of month 3.

From there it’s just a matter of time and occasionally checking with the dictionary if you don’t get what you’re watching from the context. If you want to get to C1/C2 over the next three month then change to actually French tv shows of movies. Get an app like tandem so you can actually chat/speak with native speakers. Also start reading newspaper or magazines because they’re generally more from a third person perspective and therefore somewhat different from the personal interaction in tv shows.

Important is that great does not become the enemy of good. Don’t go for 100% accurate the first month. If you try to memorize your memory palaces for hours, you’re not doing yourself any favors… 80/20 is key here. Bottom line, learning vocabulary is not the same as learning a language.

The memory palace is basically there as a temporary storage to just do big data dumps over the first week to be able to make sense of the next couple of weeks. Watching tv in your target language will then put that pretty decent sized 1,000 word data dump into context. Plus, you’ll have to put the vocab into context from a grammar point of view. The next couple of month is basically just doing the same thing again, but getting you from 1,000 to 5,000 words. After that it’s just a matter of using the language.

In summary, memory palaces are useful when it comes to language learning but probably not in a way you imagined. Daniel is right when he talks about “recall speed is of primary importance,” so you are not going to grab each word from your memory palace when you use the language in the end. The building up the vocabulary in the first place it’s very helpful.

Awesome @bjoern.gumboldt, thanks very much for your reply, and your time detailing all this approach.
Cheers, Luis

Great advice @bjoern.gumboldt! I was amazed when I learned Spanish and Portuguese how much easier it was learning independently compared to when we “learned” French and German at school (I’m from the UK).

The one thing I’d add/change from Bjoern’s description is that I’d recommend using the vocabulary when speaking as early as possible. For example, if you’ve learned some basic words and grammar as recommended, then you can form sentences using new grammar/vocabulary and say them aloud.

For example, if you learn “olvidar” meaning “to forget”, you can say a simple sentence like “voy a olvidar todo” (“I’m going to forget everything”) or “ya olvidé su nombre” (“I’ve already forgotten his name”) to get your brain used to using the word in context. This makes the transition from theory into practice easier, when you have real conversations.

Similarly, if you learn that " que " means " must " then you can make sentences with simple words like “tengo que hablar en español” (“I must speak in Spanish”).

I’d also advise you to focus your vocabulary learning on the following:

Learning nouns should be of secondary importance because:

For an example of the last point, imagine you don’t know the word “boat” or “ship”. You can say “thing that travels on the water” and people will understand you. It’s harder to do this for adjectives (e.g. “red” or “old”) or for verbs (e.g. “walk”, “talk”). Find a list of the top 100 verbs in your target language and use them in your memory system.

Finally I’d echo Bjoern’s comment about not needing 100% perfection. It’s more useful to have a conversation with mistakes, than to have the knowledge to speak perfectly yet be unable to apply it.

As a lazy cat like me, I do not want to have too specific plan. Thus, I use Duolingo to learn Spain. I learnt the topics sequentially and about 5 minutes per day. The only way I used mp is when I encountered a new vocabulary.

My belief is that I believe learning language is a lifelong stuff.
Keep up! 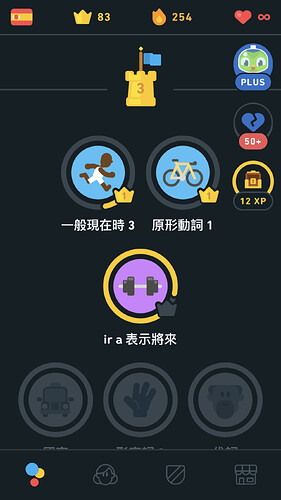 Thank you.
Nice reply.
But, what about a non-Germanic language.
Not necessarily, Mandarin, but far from English as French is in your example.

But, what about a non-Germanic language.
Not necessarily, Mandarin, but far from English as French is in your example.

That’s too generic a question to give a decent answer to… what is the language you want to learn (and to what level), what is (are) your first language(s), and what other languages do you speak?

2 posts were split to a new topic: Learning Koine Greek