What do you think of this matter

What do you think of this matter.

Message from the President - The World Memory Championships

As from 01/01/2020 and following the great success of the 28th World Memory Championship in Wuhan, I am now announcing that The World Memory Sports Council no longer accepts the participants from any competitions which falsely claim to be a... 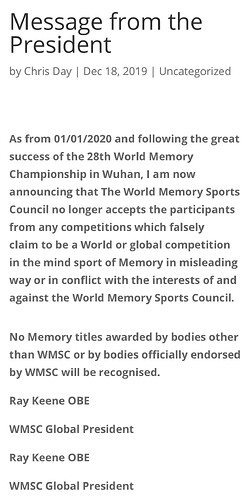 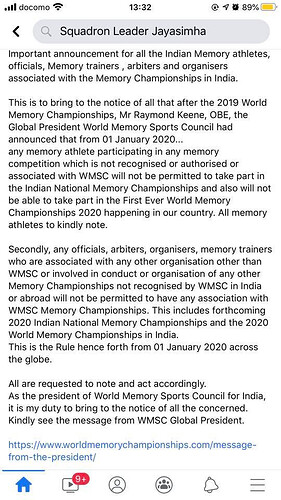 I think they should be more clear as to what they are trying to say.
It seems there are some other organizations who has stepped on their shoes, but not sure. There is no clarity on the message why they had to mention all of this on their report.

I’m confused. Does that mean that you can never again participate in a WMSC competition after you took part for instance at Memoriad, IAM WMC or the MSO even once? What if you have already done so? Does this count?

Does that mean that you can never again participate in a WMSC competition after you took part for instance at Memoriad, IAM WMC or the MSO even once? What if you have already done so? Does this count?

.
With respect, I don’t think the message refers to conditions of entry in WMSC competitions.

Certainly, the first paragraph is a horse’s arse. It reminds me of the ridiculously long, pompous sentences used in emails from Nigerian scammers that are used to fleece UK pensioners (and presumably other countries). I have a suspicion that the first paragraph does not actually make sense - but I’m still working on that.

The second paragraph, IMO, can be interpreted as follows:

So, the text refers to “recognition”. There’s no mention of restriction in WMSC competitions.

Entry conditions are mentioned - but not defined - here:
.

I have been searching the world memory championships requirements for different countries and I haven’t found much information on the following questions. What are the qualification requirements for each country? The side has a form that looks like open registration, does that mean anyone can compete?

If we ignore the self-serving promotional guff about “28th World Memory Championship in Wuhan”, here’s some of the initial text from the message:

I’m still trying to figure out what [something] is. At the moment, it’s gobbledygook. I notice that the composers have used “recognise”, rather than “recognize” - which is recommended by Oxford, Cambridge, and Merriam-Webster. So it’s not surprising that other text resembles the same indecipherable standards as Nigerian scam emails.

Anyway, it looks as if @Finwing might have reason to be concerned until someone deciphers [something], above.

I don’t know the current entry qualifications, but If a prospective candidate submits her entry on the basis of having done well in some “illegal” competition, I think the onus of proving that the entry is illegal should lie with the WMSC, rather than with the candidate. The competition is either registered with the WMSC or it’s not. If the entry based on the illegal competition is invalid, a competitor should still have the right of entry based on other, legal competition results to substantiate her claim.

Regarding @Finwing’s other concern, IMO, any disqualification based on retrospective results would seem to violate human rights.

Colour me unsurprised. Not that I know anything about any of the wannabe ‘governing bodies’ of Memory Sport but anyone who was involved in Martial Arts in the 80s can recognise that missive for what it is. Everyone and his uncle claiming to be the one True Church of St.Simonides The Unforgetting and that They and ONLY They have the right to anoint Champions.

The stone cold truth of the matter is that once money, prestige and media rights become apart of any sport or event, then the end is nigh for such things born out of a few blokes down the boozer one night coming up with a ‘world championship’ on the back of a cigarette packet.

I watched the recent Memory Games film and it was bloody obvious that some quite serious money is becoming involved in Memory Sport and its incestuous bedfellow “National Prestige”. Very soon Mental Athletes will be able to earn a decent living being ‘professionals’ and Zoomy’s Brand of Mental Performance Enhancing sport wear will hit the shelves (No offense nor slur intended towards Zoomy -I’m just using his rather ‘sporty’ sounding nick as an example).

I haven’t watched the Memory Games documentary yet (though I probably will soon after typing this), but I’ve known for a few years now that memory sports is becoming increasingly monetized. I’ve only noticed this phenomenon in East Asian countries though (China, Mongolia, etc). I wonder if a bubble is about to burst though.