Read this to better understand the Gary Lanier system and memorizing text verbatim!

I could still really use an illustration

I’m not sure if it’s exactly like this, but this is my understanding of it so far. 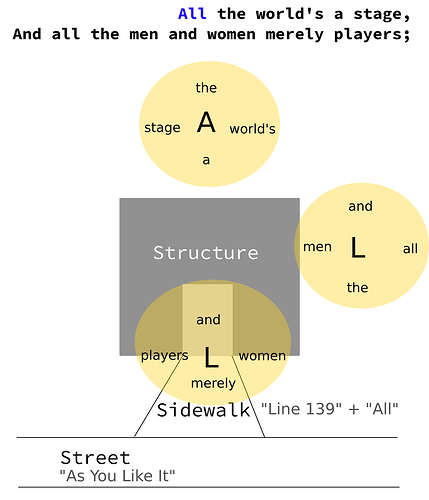 The quote is from line 139 (I think) of As You Like It by Shakespeare.

There are some more possibilities for it that are listed in the pastebin, but I think that’s the basic idea.

(Edit: the choice of quote was arbitrary. That line is relatively easy to remember due to the iambic meter, so I think it would be slower to create a mnemonic image for every word than to just memorize it with a little repetition.)

Hii, I m still not able to grab this idea.Is there anyone who can tell me in more clear terms with more easy and daily life examples?I will be thankful.Thanx alot.

Is English your first language?

Not at all dear!

Its pashto and then urdu.

Plzz send it in urdu! Thanx

No no! I m still not getting it. Plzz tell me in clear terms that what is the basic idea of this system with general example that is known to me. 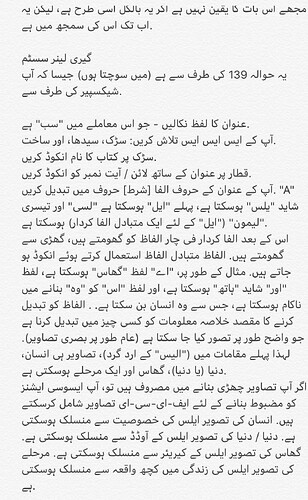 Bro thanx alot but send the above pic in english script! Thanx

[To keep the page readable for the English-speaking readers, I’ve collapsed the translations. Click those links to expand the text. You may want to try pasting the URL of this page into Google Translate.]

I think that this technique probably requires some practice with these other techniques first:

If you haven’t used all of those techniques already, I recommend learning and practicing them individually first.

If you’re already experienced with those three techniques, then maybe try a smaller version of the system first that only uses the title and alpha characters (ignore the S-S-S and F-A-C-E parts for now).

Here’s another example that only uses the title and alpha characters (at least to the extent that I understand the system).

This example uses a shopping list, because it’s a quick, regular task.

The name of the supermarket is Berkeley Bowl – that name becomes the title.

Divide the number of items to be memorized by 4 and round up. 6 divided by 4 is 1.5, so round up to 2. For the most basic version, you need a title that is at least two letters long. Our title (Berkeley Bowl) is 12 letters, so it will work.

Imagine that this is the front of the supermarket:

To memorize six items, we need two letters from the title (“Berkeley Bowl”):

Based on the sample table above, “B” and “E” will get converted into “Bob” and “Edward” in this example. They get placed in a clockwise arrangement around your memory environment. (The front of the supermarket itself is the memory environment in this case.) 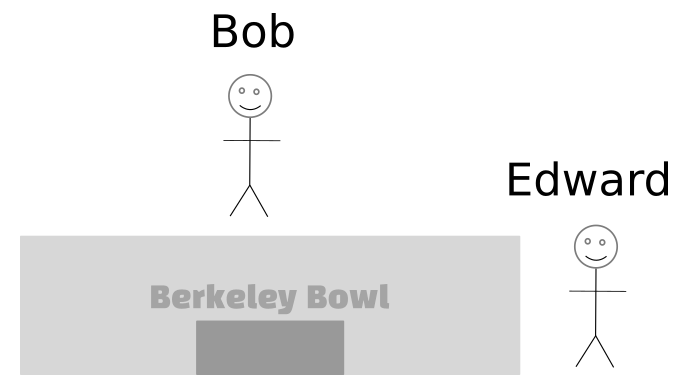 Bob and Edward each have four locations on them: top, right, bottom, and left (clockwise).

The first four items go on Bob and the last two on Edward: 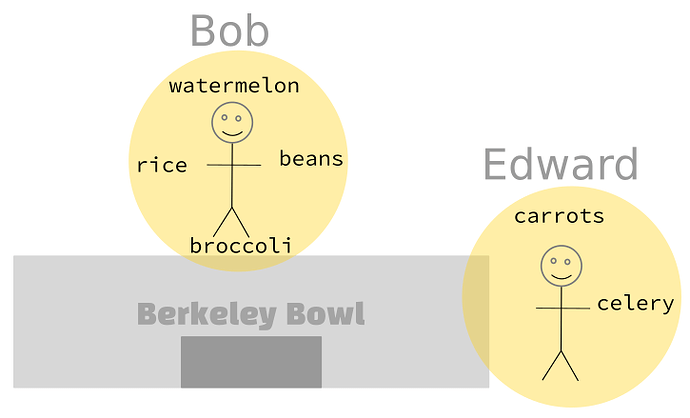 Once you have that memorized, you can think of where you’re going (“Berkeley Bowl”), extract the alpha characters (“B” and “E” -> Bob and Edward), and then visit the locations to recall the list.

I created my own alpha characters table that isn’t based on people I know. I think it would work just as well with fictional characters, cartoon characters, objects, or anything else that normally works in a memory system.

Hello,
This system seems to be efficient, but I wonder how to handle very common words, as “The”, “a”, “I”, “you”, etc.
These words are so frequently used that it would be difficult to put them in so many mind places (and there are lot of places in this system) without confusion.

The system accounts for that difficulty. That’s where “substitute words” come in. Turn “and” into “hand”, “or” into “oar”, “the” into he(maybe He Man could be the image), and so on.

I’ve tried to use the Lanier system in order to memorize some poetry; but I end up finding more useful to follow what classical writers on art of memory have said: memory of things are faster and easier.
However, indeed I could make good use of Lanier System placing general images instead of each singular word, because the system itself is a lot useful if one wants to save loci.

I made some alterations though.
First I substituted the Street for what I call Room Watcher or Guardian; it is basically a statue (placed, and would be better placed, in some kind of atrium or vestibule, after which there are all other rooms), which represents the Book, usually holding some object, which represents the Chapter.

Instead of a sidewalk, I imagine that, inside, in the center of the room there is another statue or monolith, which represents the Verse, in which there is a image sculpted or associated which resembles me the Title of the verse.

Then, in each corner of the room I placed my images.
It seems easier to me, since I was having problems with these streets, sidewalks and imagining people on the top of buildings.

Of course, I believe you should stick to whatever works best for you, but I think you’ll find if you study the system and become well-acquainted with it, you’ll find it very organized, fast, and powerful.

Yes but I meant the high appearance’s frequency of “He Man” could be confusing.

Try substituting “the” for “tea”.

So I’ve spent a few hours learning about the Lanier system, and there’s one simple question I can’t seem to find an answer to. Suppose I use this system to memorize a chapter of the Bible. Do I use the same structure for each verse in the chapter, or do I use a different structure for each verse? If I use the same structure, then I will end up having to put dozens of characters in the same position (on the top of the house, for example), which is very difficult for memory retention. This is no different from using the same memory palace to simultaneously memorize a dozen different lists. In order to be effective, a memory palace should only be used for one list at a time. But if in the Lanier system I’m supposed to use a different structure for each Bible verse, then memorizing a whole chapter will require using 30 or more structures along the same street, which is also quite difficult considering that most of us can’t recall 30 adjacent structures on any street. Thanks for the help.