[This post was about achieving 26 images in Memory League without using locations.]

Impressive! SO you are just using the peg system instead of a palace? Do you usually do this for memorization?

When I started, I couldn’t even do 21 at first.
Seeing you I remember my day when I started memorizing images.

I also started with peg system , and still using the peg system.

When you advance to level 10+, you can start to try this.

In the past long years, people thought that Link Mehod is too slow to be used in competition. In here I tell you what, it is just because they don’t know how to master the rocket. Instead, they ride on it and heavily fell in competition. Back into biness, the above is just a joke that I made it up, what I am trying to tell is that Link Mehod can be more powerful then you thought. The traditional linking method(LM) is a memorized object/person/effect/action matched with a given picture. If I …

Well done!
I actually used a similar method a year ago by using alphabet actions, i.e. A=Arrow (throw dart arrow), B=Bomb… K=Kick etc. So, if the first image was a bowl, I’d imagine throwing a dart arrow at it, next image would get bombed and so on.
This method worked better than I’d thought. It’s not my invention though, I remember someone posting about it in this forum.

I use a similar approach. No loci, just the rhyming system (1 = gun, 2 = shoe etc). My best with this method is 47.97, earlier this month. I also throw out 5 pictures at a time. I’ve gone lower, but made mistakes. Still hoping, though! 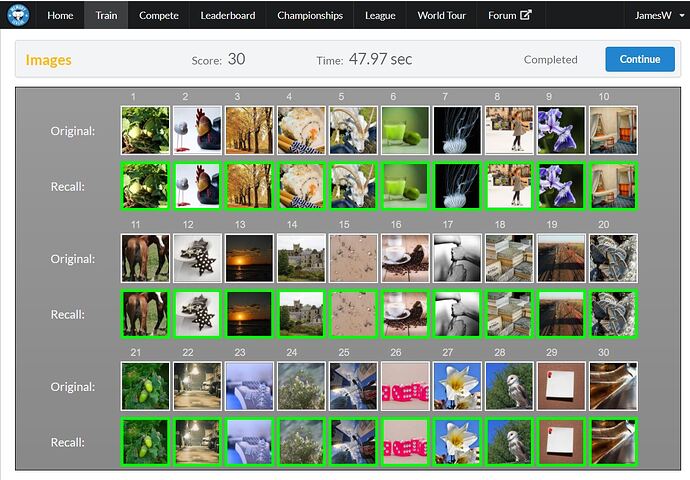 It took me much longer than it will take you!

Back in December 2016, I was on 16 images in 60 seconds. I think I eventually reached 30 in the following year, but it was only last year that I began lowering my times. In November, I got down to 50.38 and have been lowering it slowly since then.

What helped was going from 1 image at a time to seeing 5 on the screen. My first attempt was something like 12 in 60 seconds but as I went along I quickly improved. I don’t think I could manage my current times if I was still looking at one image at a time.

I don’t practice enough. It’s generally not more than one go a day - and sometimes not even that. I know you’re very much younger than me (I’ll be 67 in May!) and you’re improving all the time. You’ll be way faster than I am very quickly. (If you’re not already!)

I should practice more often. (If I did, I’m sure I would have reached my current time in 2017 - but I took a year off and let it all slide.) If I could get to 39.9 seconds I’d be very happy! Not sure I ever will. My reaction times aren’t bad, but I know I’m never going to be able to think as fast as a younger person.

I wish you all the best - and am sure all your times will be very much better before very long.

I’m sure I’d enjoy a real-life competition. My problem with ML is that I get too nervous in one-to-one games. I just can’t relax and my speeds collapse.

It seems like you have the same problem as mine.

I have a potential to memorize fastly but when I compete in memory league 1 to 1 competition, I totally get nervous and can’t concentrate.
And feel very bad about that time because It seems like I know a multiplication table of 2 but can’t speak it when my teacher ask this.

I have a potential to memorize fastly but when I compete in memory league 1 to 1 competition, I totally get nervous and can’t concentrate.

Nice to know it’s not just me!

Sound good to me. I like the idea of Alphabet Actions, which I had not seen before.

Here is my contribution with memorising images.

Here are the pegs with the actions you can use to memorize images in the correct order. Place these actions on the images mentally, and or the items you want to memorize.

This list gives you at least 30 photos, or everyday items to memorize one by one in the correct order.

I’ve also explained how I memorise images on this link here. If you like these, then you can download the images for them and use it.

You can memorise any image, any item, any list and everything else in between as long as you follow the simple method of applying actions.