Back in 2017 I made my first Millennium PAO system. I was young. I was ambitious. I ended up changing it a lot before I got a system I would be using. That system is now here: an 8 digit PAO. 3 digit person, 2 digit action and 3 digit object.

The full system has a few more objects which can allow me to extend it to a 11-digit system should the need arize, but I decided to only share the main system with you so far

I can always add a page for the extended bit later on if you dear people really want me to.

16 Likes
Please Share your 3 Digit PAO 🙏🏻(I am Just Starting 3-3-3 PAO)
Anyone who uses anime in memorizing deck of cards or numbers? How's your system?
How to make Action stick to Person?
Systems analysis of visual memory systems
Rajadodve786 (Raja) February 8, 2020, 3:02am #2

@Mayarra
I have a question, how you memorized such a big task.
By their shapes or spaced repetition.

If you give an advice that how you memorized this than it helps all.

Example -
If you see shapes/logic in Hindu mythology.

I have a question, how you memorized such a big task.

But to learn it, I have another method. Lets take number 679, the Grim Reaper and a Lysosome, as an example. A little background, the lysosome is reprisented as a close up textbook-view of a lipid bilayer with a membrame, thus all the little spheres outside and the tails inside. Their job is to “eat” the cell’s waste.

Now, the number 679 is split into two parts, 67 and 79. Back in my old PAO, 67 would be Han Solo pilotting the Millennium Falcon and 79 would be a Rancor getting crushed by a gate. Important are the action “Pilotting” (67) and the object Gate (79)

I see the Grim Reaper (679-P) Pilotting (67), goggles and headset included, a heavy metal Gate (79), like the ones you see in medival castles. He crashes into a Lysosome (679-O) in an attempt to break it open, but the Lysosome ends up eating him.

The actions are the same as my original PAO, so those I already know. So in the end I have my Person, doing an Action with a 2-digit-Object to a 3-digit-Object. If I want to know 679, I just have to ask myself “Who was pilotting the gate, and what did he do?” 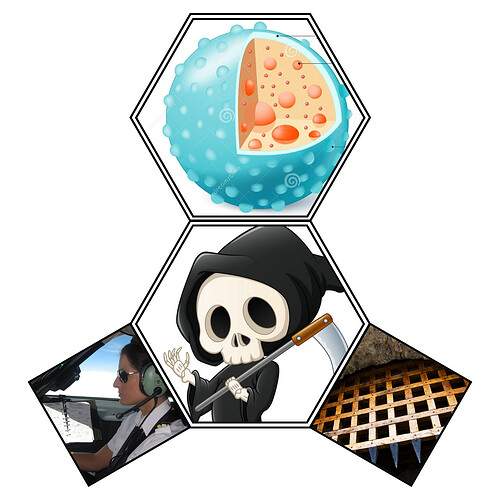 Very interesting, what do you do with that system, are you competing on memory league and/or in classical championships ?

I am not competing, I am just gathering knowledge. The system allows me to easily memorize numbers up to 8 digits , but also in two different digit numbers through a splitting action, which tells me that P and O represent different things.

With some effort, I can also work with 11-digit images, but I will not often find numbers that range that high.

@Mayarra
If you have to create 3 digit actions then how can you create.

My actions are 2-digits

coming up with 3-digit persons and objects was a pain already, so I don’t think I could easily come up with actions.

If I would attempt to, I would work with categories and specifics again. For example, I would turn hitting and punching into distinguishable moves through specifics. Hitting is just a casual hit, but punching is going all professional boxing-style, lots more force than hitting. Pounding is like a gorrilla, slamming sends someone flying or something breaking. Similarly, hopping is playful, jumping is serious, leaping is going all the way to the moon.

I am a writer for fun, and in writing it is very important to work with those specifics. The character doesn’t hit very hard, he slams his fist into his opponents face. He doesn’t jump very high, he leaps towards the sky. That is why I would go that route.

An amazing share…Thanks for sharing it.

Hi Maya, Do you have any essay recommended so I can understand how the Millenium system came from and how to construct it?

Is it this one that originated the system?

What system do you use to generate the first 100 PAO? - Major System, Dominic, or came upon your own image that makes sense to you personally?

The linked system has indeed been in the back of my mind while creating it, as well as for the method to memorize te images. Besides that I just went and gave the system a lot of thought and experimentation to see what worked for me.

My original PAO was also a category system.

I may borrow this approach. I currently use 2 digit pao and suspect this may work better for me than 3 digit.
My current best for numbers being 34.43, and I need 13 images and a grab. With this I need 10, and no grab.

I thought that might be the case. Good Luck!

I may borrow this approach.

I also took my own inspiration from this forum, so feel free to use my system as your inspiration!