Is there any method to memorise mind maps?

Is there any specific method or system for memorising such mind maps and complex flowcharts?

Any any other user here tried anything as such before?

I adore little stories for this. Let’s take the most simple kind of mindmap, I can’t make one currently so lets show it as a little list.

The main subject is Memory Techniques, so that is the palace. I don’t put other subject into it, just a whole palace for this mind map. In the mind map, there are two links: Method of Loci and Number systems, this translates into two rooms with each an own guide.

The method of loci room has Loki (marvel/norse mythology) as my guide, seeing him makes me think “oh, loki, that means this is the room for the method of loci”. He shows me Birmingham Palace (Memory Palace) first, maybe he even mentions some fun facts about it. Second is a small van, ready to be used to travel (Memory Journey) and last is a fata morgana of a huge palace (Mind Palace).

The next room has Alan Turing waiting for me, as he reminds of codes and numbers, thus the coding for numbers AKA number systems. He takes me to the holiday resort I visited on the Dominican Republic (Dominic), an army major I met some time ago (Major) and a huge catalog (category).

If the mind map has more sub sections, you can just add different sections to your palace. A palace for the subject, with a host for a floor, reception desk for parts of a floor (like left/right, north/east/south/west, floor/walls/ceiling, you name it), then the rooms with the loci. You name it. Loci could even function as “portals” to other “rooms”, like a guitar is a loci normally, but it can also be turned into a room inside the guitar of little loci as parts of the guitar (string, neck, head, etc) and the header belonging to it is images as a person playing the guiter.

With peg lists, I work with tens. 10 would house the part of the mind map, 11-19 the points that belong to it.

Quite interesting, @Mayarra. I will look upto this method, however I may do a little modification.

Unfortunately, My maps are bigger and complex, but thanks for giving the initial Idea. I think I may work up to it now.

Hey @Mayarra, can you give me some idea how to get done with this thin?

The main problem I am having is Memorising the reagent/catalyst (The things that are along the arrow and red in colour). 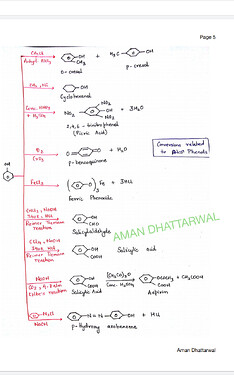 This looks like a 9 station memory palace to me, with 3 to 4 sub stations for every main station. The equations can be stories created by using images fixed for all the symbols

Mind map is also something I could never get grip on They say you can remember the picture made up with many colors and images but I was not successful retaining a mind map yet.

I have created a topic here, following your advice.
Please tell what are your thoughts.

Sorry for the late reply! been busy.

Chemistry is not my strongest suit, still have a lot to memorize on that area. But I will give it my best shot, based on similar approaches I have used in biology topics. I can’t help you with an image I would use for the molecules, because I rarely have any myself.

From what I can see, I could second @tusharvjoshi on this one, with a little change.

I would get one guide for 9 loci, like I described. He meets the reagent, who introduces him to the catalyst. They all shake hands, which creates a reaction. Perhaps the guide shakes hands with the reagent and the catalyst slams their heads together. Little stories like that.

i have an e-book(can’t remember how i got it) on memory that discusses mind map towns. it’s like bringing a mindmap to life with stories, similar to maya’s explanation. The author mentioned using it to read books, so rather than creating a mindmap, he maps out a town with the info he wants to memorise, it brings stories, colours, emotions all that stuff.

Interesting, what’s the name and author of the book?

I am no fan of Mind Map,but as @Mindory suggested,Mind Map town is indeed mentioned in the Andy Gray e-book.He takes a couple of pages to explain it(Pg 35 - 37).

Someone has made a slideshow of it & is available on a website.
I am not sure if it’s allowed to post the clipping here coz the FAQ section of AOM website says:

But,someone on youtube has made a video on the same topic and let me tell u its taken word by word from the original text.