I read about memory systems a couple years ago, never got fully into it. Finally finished my first 00-99 PAO system and put it below. I think a few verbs will be difficult for example “skipping” vs “frisbeeing” or skydiving vs flying. Let me know your thoughts or suggestions!

*Edit, this was supposed to be primarily based off the major system but I filled the gaps with personal friends or things I thought were memorable if I couldn’t find something to fit 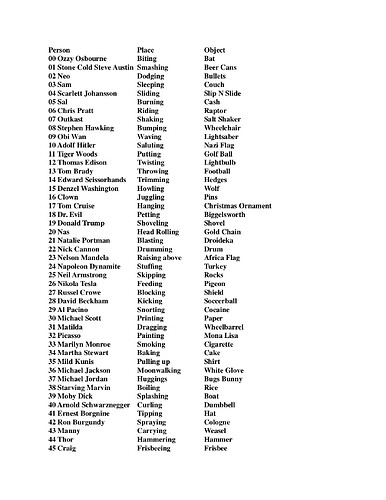 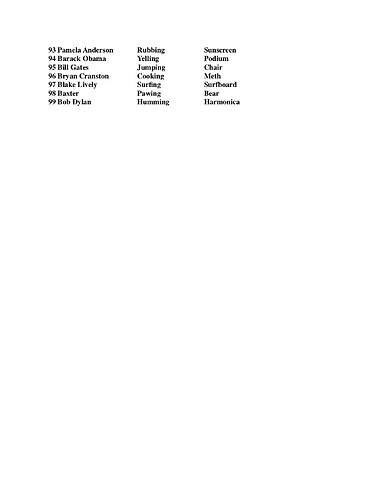 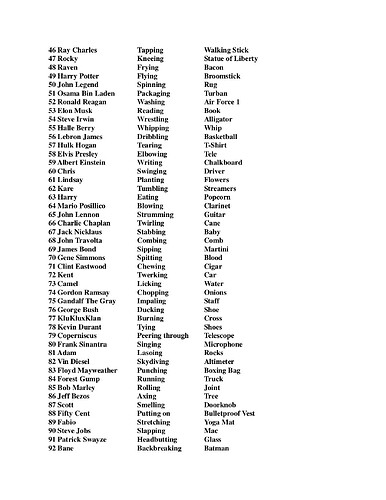 Let me know your thoughts or suggestions!

For 09 I’d use lightsaber-ing as the action and similarly for 13 I’d have QB-ing. Reason being that even though “waving” (09) you have more options when creating your compound PAO images, but during recall that may not be the best idea to have that much ambiguity. In 44/45 you use hammering/frisbeeing as the actions and that will get you much faster back to the overall 44/45 image.

Also 10 and 23 are both flags for objects which can lead to confusion. Now, you could argue that they are different flags, but really what’s on the flag is a secondary attribute. The same would apply to a birthday cake and a wedding cake. Eventually, you’ll start encoding so fast, that it’s the essence of a flag and the essence of a cake… by then you might be too familiar with you images to easily change then, so just keep in mind what will happen once you’re getting really fast with your system.

Take 350910 which currently gives you Mila Kunis waving a Nazi flag, when you could have Mila Kunis lightsabering a swastika. The problem is that after a deck of cards (17 locations) you might not remember which flag she was waving and once that happens you might start second guessing yourself on flag-waving actions, because that very different from waving a lightsaber. You might then end up with 43 as carrying a flag, thinking that you just animated the carrying action a little… and the obvious thing to do with flags is wave them as you carry them.

I guess you see where I’m going with this…

Yeah, it’s just the P, A, and O for 19, 19, and 19. Now I don’t know the significance of shovel and shovels as A and O, respectively; I’d have a different image associated, but there is no difference here as far as composing the compound image.

This happens so rarely though, you might as well make it “Me (as in yourself) handing Gold Star to [Person]”. That way it’s easily identifiable and you don’t end up searching for A and O because you think you somehow forgot it along the way.

Don’t forget to tie the P to the location this information is stored in. You can just have him shovel the ground at that location and a bunch of people throwing golf balls at him at the same time.

So I always thought of PAO as an entire image at a location does anyone else do this? Or tie a string of quick connections, place - person - action - object?

OMG! This is something new, but still I doubt understanding it

I always thought of PAO as an entire image at a location does anyone else do this? Or tie a string of quick connections, place - person - action - object?

Yes, that’s how it’s done by almost all memorisers. There are some other methods, but most of the time it’s the method of using the locis (the spot at the place) to store the information which is your random PAO. So you are doing it right.

As for 19 19 19, D-Trump Showelling a Showell;
Choose an alternative Action Or an Image for every double digits regardless of what the double digits may be.

As an example, you may use something like “A Double Decker Bus”.
So when you use the showell on a Double Decker Bus, you know the last image was also 19, or whatever the previous image or action you used for your 2 digits.

I use this method for my Double digits, and works every time.
Hope it works for you too.

It would have to be whatever the action you have set it to be.

Here is the trick to deal with it; make the golf ball Huge in size, bigger than the showell. This will help you to see/imagine it much easier than showelling a normal size golf ball. Exaggerating the dimensions of an object while memorising will help your visualisation and imagination.
If the item was already Huge, then you may just resize it to make it a little smaller, but keep the action as you set it to program your mind with it.