Anyone using his body as locations 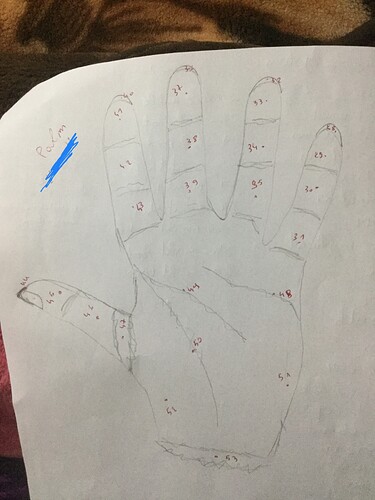 @Member this is interesting. I’ve seen one video where the speaker used his hand to memorize a speech. Your suggestion would give greater options in bullet point memorization. Here is the video: https://youtu.be/oneFKU9aM4o

Thank you I will take a look of it now

An excellent technique. Thanks for sharing it…I experimented with the technique,and it works great just like a Lukasa board…

Does this really work?

Not to state the obvious but, to memorize lists using stories, we often go through three stages:

By unique character, I mean, they have unique structures, properties and behaviors. And so will make for unique interactions/stories.

I tried to memorize a list using the hand locations numbered 1-20.
For me, when I attempted recall using these hand locations, I could recall some stories, but not the location where they happened.

These hand locations are not of unique characteristics to me. So Despite being ordered, they didn’t help me in organizing my unordered list.

Some comments say It worked great. I would be really amazed to learn how they made this work.

These hand locations are not of unique characteristics to me.

I find the hand locations to be very unique!! Not only they have specific locations in my hand,I can see they have different shapes,locations,features and sensory inputs(I can touch them,feel them,visualize them)!!

Besides,you don’t always need ‘unique’ locations. You might just need ‘ordered’ location. That is why,Grid technique works,too. In Grid technique,you don’t have unique location for each grid. All you have is just ordered/structured locations!

Why don’t you start with experimenting with simple lists? May be,ten items in ten fingers!

Isn’t there a problem with the fact that all these locations (e.g. on the different fingers) look too similar?
Won’t you confuse e.g. locations 4, 9, 14, 18 (as per the image) and the same locations also on the other hand?

Guys,get yourself familiarized with the “Grid technique”!!!

In The Book of Memory by Mary Carruthers, a memory system belonging to Hugh of St Victor is described, where text to be memorized is ascribed to an ordered numerical grid. From the book – The method utilizes psychological principles similar to the method using images in background places, but in this case the system of loci is numerical, and the images are short pieces of text written into the numbered backgrounds, as though within the cells of a grid. The images of written text are impressed …

In The Book of Memory by Mary Carruthers

I just went through a copy of this book online. I also found the section on Hugh of St. Victor’s system. The system in the book is very similar to peg systems.

Hugh of St. Victor’s Memory Grid System was under the section titled ASSOCIATION AND IMAGE MAKING.
Firstly, book said the text was to be visualized.

The loci is not exactly numerical. Book said: a familiar list was to stand in for the numbers. 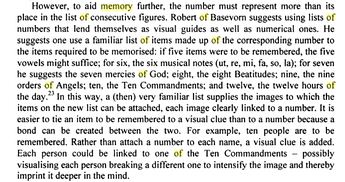 The grid system seems to be built upon the common practice of deciding how to break your text into chunks (1-word chunk OR 5-word chunk). Everything else in the grid is intended to be associations between images and unique hooks, and not just hanging images on similar-looking paper sections or finger sections. Unless these are somehow unique to you, as @elitely says they are.

That’s what I got from the book.

You can use the Grid concept as Loci… Why not try it yourself! Create a 2x2 grid and put four different items in the four square box of the grid. Make some kind of story if you like. See if you can remember them! I use 2x2 grid for credit card number!!

When you put an image in a cell of a grid,that cell becomes ‘unique’…right? But the grid/cell doesn’t itself has to be unique like a loci in a Memory Palace. A grid/cell is just an empty box/square! If Grid technique can be used for text,why not for image,too?

Grid technique is not about “text” alone. You can put images in the grids. In the walls of a room,you can create 50 loci just by making 50 cells/columns on the walls(four walls and ceiling)! And they work!

Also,read Lynne Kelly’s books!! There are a couple of interesting memory tools in the books,which would seem strange and ineffective as memory aids! But they work!

Not sure where I got the following article from,but I kept it in my journal:

In the middle ages, practitioners of the art of memory largely abandoned the use of architectural spaces – it had been a fashion of the ancients – and substituted mental grids, either square, circular, or semicircular on the model of an amphitheater. Like building interiors, a grid of rows/columns consists of regular groups of loci (cells) that can be filled with content. Unlike the various parts of a building, however, there is nothing intrinsically distinct and memorable about cells in a grid, so the key to this system is using a cross-referencing code system.
In the grid system, the dimensions or axes of the grid – the rows and columns – are different known series, be they numerical, alphabetical, or whatever. If each cell has a row letter and a column number, that two-character combination becomes a hook for the mental image that goes in the cell. Each mental image simply incorporates the code for that cell.

This was essentially how the memory masters of the Renaissance – men like Giordano Bruno – worked to store and encode vast amounts of knowledge. They typically were intimately familiar with many list-like sequences to which cell rows and columns could be keyed – the zodiac, pantheons of classical deities, Biblical genealogies, etc. These things came readimade with vivid associations to help in fashioning memory images, although theoretically a memory grid could be constructed using simple number- and alphabet codes.

It is possible to create vast mental spreadsheets using this method. And the only limit to the number of dimensions of such a system would how many natural series of things you can use for coding. There’s the alphabet – a series 26 items long that almost everyone knows by heart – and the numbers; even just using the digits 0-9 (or 1-10) plus the alphabet gives you a grid with 260 cells – more than I’ve ever needed (but I’ve never needed to memorize a book). Multiply that by the 12 months of the year and … well, you get the idea.

Unlike the various parts of a building, however, there is nothing intrinsically distinct and memorable about cells in a grid, so the key to this system is using a cross-referencing code system.
In the grid system, the dimensions or axes of the grid – the rows and columns – are different known series, be they numerical, alphabetical, or whatever. If each cell has a row letter and a column number, that two-character combination becomes a hook for the mental image that goes in the cell. Each mental image simply incorporates the code for that cell.

Wow. The two-character combinations for hooks. Makes a lot of sense now.

Some comments say It worked great. I would be really amazed to learn how they made this work.

Now I am definitely amazed and very excited at the same time. Can’t wait to try this. I am sincerely very very excited. Thank a bunch