What is the official world record in each category ?

For both IAM and WMSC 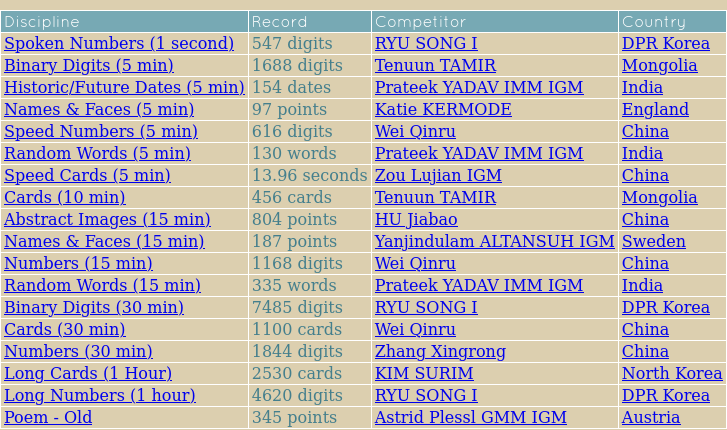 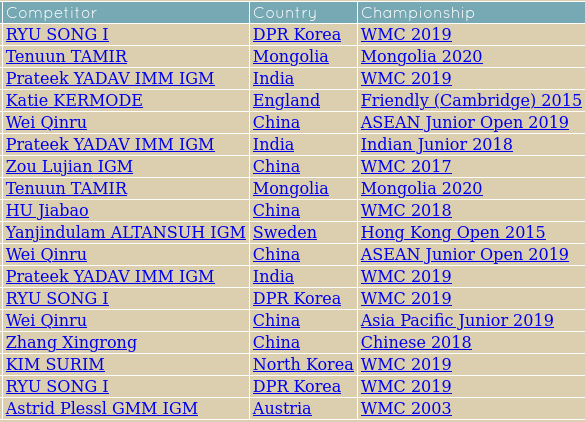 This is excluding some IAM records though

Do you have them for Each category in memory league ?

Do you mean memory league records?

Oh
give me a moment

International Names 30 in 59.?? by Jan hendrik Busher @JHB
Numbers: 80 in 9 seconds by Andrea (Someone got 7 some years ago but score is still disputed.
Words 35 seconds by Claire Wang @ClaireBookworm
Names I am unsure maybe @katiek , @JHB , or @ClaireBookworm
Cards 11.84s for 52 cards by 叶博.
7.94s for 30 images by Csengo Balint

Those weren’t in officially ranked face-to-face competitions though.

Yes. I am aware

Back when I competed a few years ago, I was tracking the best scores on Memory League and I am sure many of these have now been beaten but these were the records …

Does anyone have any accurate updates on these?

A couple days ago Csengo Balint got 7.94 you can see it on the memory league chat

Hi Mathmaster.
Are these two you posted done in league matches?

All the records I posted are in competitive league matches or official live events.
Apart from the bottom two of course but these cannot count as match records.

No neither of them are

A French competitor told me that Claire did 30names in 27s during a season match. So maybe it’s the record for names unless someone did better .

I have a collection of roughly 34’000 ML games of 40+ selected players (mostly players who have been streamed, but the set does not include all of the games those players have played), mostly from the past 1-3 years. This is only a small subset of all the games that have been played of course.

As can be seen from some other posts, there have been some results that have been better than this. But neither them, nor these, have been done at physical live events. What @ClayKnight posted would probably be the closest to an “official” record, but it also feels weird to say that considering most people never had a chance to compete in a live ML tournament.

Edit: @SimonReinhard also posted a good link regarding the official records in the other thread.