Has anyone read The Memory Arts in Renaissance England? I came across it while looking for information on the hand image in Giordano Bruno’s On the Monad, Number and Figure.

Here’s an illustration from the memory arts book: 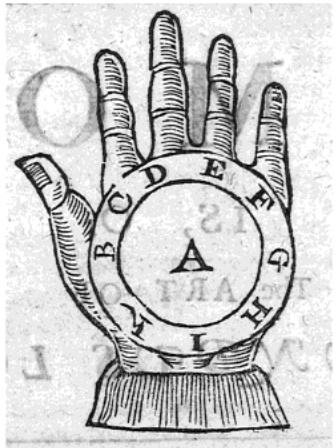 I can’t see much of the text in the preview, but it looks interesting.

@Josh I’d picked up a copy of this recently and have started into it. The opening is a quick overview of some general history, background, and general techniques.

The subtitle is solidly accurate of the majority of the book: “A Critical Anthology”. The bulk of the book are either translations or excerpts of pieces of memory treatises in English throughout the Renaissance. They also include some history of the texts, their writers, and some analysis of the pieces.

Some of us have been digging up old editions of books and struggling with reading and creating context. These authors have done yeoman’s work on a lot of this and collected some of the more interesting historical works on the memory arts and added lots of context, at least for works in English (and focused on England) during the Renaissance. It’s a great text for those interested in the history as well as more readable versions of some of the (often incomprehensible) middle/late English. They also have some analysis often conflicting with statements made by Frances Yates about some of the more subtle points which her broad history didn’t cover in detail.

Given it’s anthology nature, its a nice volume to pick up and read self-contained portions of at leisure based on one’s interest. It isn’t however comprehensive, so, for example, they’ve got “translated portions” of part of Peter of Ravenna’s The Phoenix, but not all of it, though they do outline the parts which they skip over. (Cross reference https://forum.artofmemory.com/t/peter-of-ravenna/27737.) Other segments are only a page or so long and may contain tangential passages or even poems about the art to better situate it for scholars/students looking at it historically.

I’ve corresponded a bit with Bill Engel, one of the authors who has been wonderfully helpful. He said he’s got another related book Memory and Morality in Renaissance England (Cambridge) coming out later this summer as well as a few other related books and articles thereafter. Some are mentioned on his site: https://www.williamengel.org/.

Sounds interesting. I got a copy but haven’t read much of it yet.