Records for each category?

Is there a way to find out what the records (ie. fastest times) are for each category on Memory League? I’m giving a presentation on Saturday about the USAMC and will be talking about the Memory League during it as well. People may be interested in what people are capable of.

There is not currently a way to see this on the Memory League website, but I have been collecting scores of over 5000 matches since the beginning of December, and some of the fastest scores I’ve seen are:

(Simon Orton and the team behind Memory League could probably query their database directly to see the top scores, but this is not something that is public yet.)
2 Likes
Kiko13 November 13, 2018, 7:43am #3

Awesome, thank you so much!

Thanks for that, Florian!

Unfortunately I can’t easily query the database for the top scores.

The best scores achieved in championships are:

I really love Florian’s spreadsheet! I use it to check how my opponents are doing in the league all the time

Does Emma’s score count as a record? We were told last year that it wouldn’t count since the set of images wasn’t one made specially for the competition.

I don’t know anything about 叶博, but Jan is still around, and Alex just has a (hopefully temporary) problem with accessing the site at the moment - people sometimes just don’t get the chance to play on Memory League enough when there’s something else happening in their life

By the way, are the current records (and rules) still available on the ML site? It used to be possible to access them via “memoryleague.com” (without “app.”) but not anymore now that the training site has migrated away from “app”.

Ye Bo is attending college. He is very busy and will not continue to play mnemonics for the time being.

Ye Bo’s speed card is real data, but only once in 11 seconds. This is just a small probability event 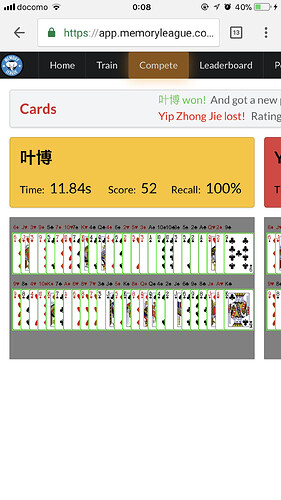 Any updates on the validation of zion kim’s time? Also what is his league user name can’t find Zion

Of course it’s fake. Why do people after so long time still consider it could be legit.
Edit: I am Zon but I have nothing in common with Zion if somebody could think.

The Memory League world records are also listed on the IAM statistics page:

Will need to check again regarding Emma’s record but my recollection is similar to @Sylle.

My understanding is that if the images that were used during that attempt/tournament were the normal ML training images and not new ones created for the event, then it cannot count as a world record (the same applies to new/old faces at Names). I think that has been clarified quite clearly for a longer time. So, if the images were not new ones, the reason that it is listed there would be database-related and would be corrected.

Ok, I have taken a look at past correspondence and the Images in 2017 were indeed training images.