I was hoping to come up with a mnemonic system for Japanese vocabulary, specifically the pronunciations. From what I’ve read, it seems like Japanese is noted for not lending itself to mnemonics as easily as other languages, and personal experience seems to confirm this. Has anybody found a technique that worked well? I considered just using unique mnemonic images for the characters and then linking the characters together to form a stream of images to form a word, but the issue is that each character can have multiple readings, so this approach seems to break down.

Once I get some sort of system, I can use a memory palace, but I just don’t know where to start. Any advice? The phonemes themselves don’t seem to work well with mnemonics, so I suspect the solution lies in incorporating the characters somehow.

Hi Nicholas,
Luis Angel has a video which may help you to get started. Hope this helps.

Thank you for the post, Erol. It’s a good approach. The basic idea seems to be coming up with a mnemonic image for the phonetic component, one for the semantic component, and then linking the images together. Composite images like these would work well with a memory palace. My only concern is about the longer words that contain many syllables–words like 食器洗浄機 (shokkisenjyouki) or 一所懸命 (isshokenmei).

I’m going to try to come up with mnemonics for these harder cases and if I’m successful then it’s probably a viable approach for all words. In not, then I’ll probably go back to what I was doing before, which is basically just memorizing as many readings as possible and then using characters to compose words.

Nicholas, I see what you mean. There is an interested post about it here I’ve read a while ago.

I think that is very important to look at the purpose for which you want to memorize the Japanese vocabulary.

For example: If you simply want to memorize the vocabulary for no reason, then you can definitely use a mnemonic technique, but if you want the language to become second nature, i think you should learn by repetition.

Nicholas, I see what you mean. There is an interested post about it here I’ve read a while ago.

Thank you, Erol. I read through it, and it does indeed address my concern regarding multisyllabic words. I’m going to give it a shot after my finals are finished. I’ll pick out 30 or so difficult words, and if I can come up with mnemonics for all of them, I’ll continue.

I think that is very important to look at the purpose for which you want to memorize the Japanese vocabulary.

For example: If you simply want to memorize the vocabulary for no reason, then you can definitely use a mnemonic technique, but if you want the language to become second nature, i think you should learn by repetition.

My goal is fluency. I agree that repetition is key and that merely memorizing words with mnemonics won’t result in fluency. The idea is to build a sort of mental library that I can pull from (slowly) until the mnemonics themselves are no longer needed. Mnemonics also make words more resilient to atrophy.

If someone would make a summary from that pdf it would be very helpful.

I think the basic idea is that they created mnemonics for foreign vocabulary words, and retention went from 28% to 88%.

Here are some more examples from the paper, using Russian vocabulary words: 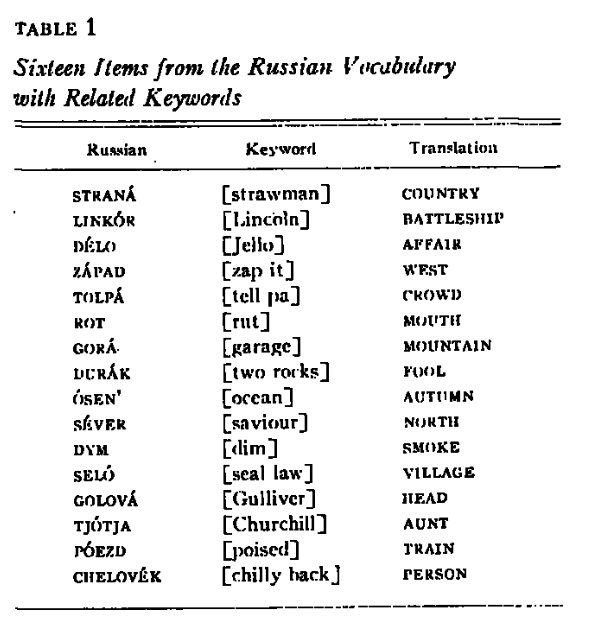 Great,
So The idea is same as the video, impliment a meaning which youre familiar with that foreign word and make a short imagination/story.

I’ve been using this method for my japanese verbs without even knowing this, ha ha
Thanks for the summary though.

Some of the longer words are compounds of shorter words. If you learn the shorter words, putting them together can be easy depending on the word.

For something like 一所懸命, that is harder because it comes from a type of Chinese expression composed of 4 characters. In Japanese, these 4-character word expressions are called 四字熟語 (yo ji juku go).

Also, because these expressions come from Chinese, the onyomi (Chinese) reading of the kanji would be used, so each expression always has just 4 syllables.

One of my favorites is 四面楚歌 (shi men so ka). The first two characters mean ‘4 directions’ or ‘4 sides’. The third one is the name of a state in China at the time of the story, and the fourth one means song. The short of the story is that a warlord was fighting a losing battle and when he heard soldiers singing the song of the army he was fighting (the So army, or Chu in Chinese) from all four directions, he knew he was surrounded and doomed.

The expression literally means something like ‘Hearing the So army song coming from all four directions’, and it’s used to express that someone in a tight situation is screwed. For example, if you arrive to class and see that you have a midterm exam that you forgot about and didn’t study for, you could say 四面楚歌 (shi men so ka) to express ‘I’m screwed!’.

Thank you for the response, Issa. I actually did know about the decomposition of some of the larger words into smaller words, but I didn’t know about the Chinese expressions. I had no idea what the etymology was actually. It’s really interesting.

Also, because these expressions come from Chinese, the onyomi (Chinese) reading of the kanji would be used, so each expression always has just 4 syllables.

As far as my approach to learning vocabulary, I think I’m just going to continue using Anki. I was using Anki for a while, but I unfortunately had to stop during this last semester due to inadequate time between school and work. I have a theory that there’s a certain threshold number of words where once you reach that number, you know enough characters and readings to synthesize the majority of other words. My experience seems to support this, even though I only know a little over 1,000 words. Maybe after 3,000 words things will start getting a lot easier.

I experimented some today, and I found it very difficult to come up with mnemonics for longer words. And even though some these can be decomposed into smaller words/pieces, I think the more efficient route will be to just continue focusing on readings.

I experimented some today, and I found it very difficult to come up with mnemonics for longer words.

Feel free to post some of the words here. I’d be interested in trying to come up with mnemonics for some of them, and others may as well

Here’s one word I came across today: 博物館 (hakubutsukan, which means museum). Could you come up with a mnemonic for this?

I actually already knew this word but it nicely exemplifies the kinds of words I’m talking about. My approach has basically been to just consider the meaning of the characters (which only makes sense sometimes) while also trying to development a repertoire of the different readings. For instance, in this case I would relate 物 to 植物 and 動物, and then I would recognize 館 as a common “suffix” (if you can call it that) for buildings. Whatever’s left I would just have to memorize, and then I could use it later for new words.

The way you did it with the meaning of the individual characters, by cross referencing them with other words they appear in that you already know, works really well for me. It helps me learn the new word faster, while at the same time creating a deeper understanding of the characters and language. These characters often don’t have the exact same meaning in English (or whatever language we translate them into), and the more you learn about the different words they appear in, the more you understand the meanings and nuances the words can carry.

I believe that 博 by itself means a large exhibition. If you know that, it’s easy to remember ‘a building of things on exhibition’ is a museum.

For the pronunciation side, the I would use a hawk dropping boots into a can.

Feel free to send more words - this is fun

Killie154 was also doing some amazing things with using mnemonics to learn Japanese, which you can read more about in some of his old memory training journals here.

You may find more useful information in some of the general posts on Japanese here.

For the pronunciation side, the I would use a hawk dropping boots into a can.

That’s very clever. It looks like I may have given up too easily. And thank you so much for taking the time to post those links. I’ve already started going through them.

Feel free to send more words - this is fun

Will do. And thanks again.

edit Wow!! Killie154’s journals are really interesting. Apparently he was consistently learning 100 words/day using mnemonics similar to what you described. I would love to achieve a similar pace, but the huge caveat for me is school. It takes so much time, and my progress pattern in all my languages thus far has been the same: learn a lot over the breaks, then school starts and whatever I learned starts to atrophy. It’s incredibly frustrating.

edit Alright, so I outlined some memory palaces that I’ll be using for Japanese. Here’s one of my first entries: 取得 (shutoku, a suru verb meaning acquisition). The image is a person descending in a chute (parachute) and acquiring a token once he reaches the ground. Killie154’s posts have me really excited!

Here’s a word for you: 美しい (utsukushii, which means beautiful). Some words I know very well, and others are rather tenuous. This one is somewhere in the middle. I’m curious how you would approach it.

Also, I made a memory journal here, which I’ll be using to post progress and discuss what’s been effective.

And great journal! I’m sure a lot of people would love to see specifics on what you’re coming up with for Japanese words (and French) if you’re ever interested in sharing

And great journal! I’m sure a lot of people would love to see specifics on what you’re coming up with for Japanese words (and French) if you’re ever interested in sharing

And I included one example, but I’ll be posting more in the future. The basic approach is very similar to Killie154’s, the biggest difference being that I often pull from my repertoire of phonemes from the Ben system.