I have two questions:
1- Would it be worthy to learn simple fictional languages, I mean, a language that it is simply and has its own grammar structure, in order to get used to learn grammar and languages faster in order to learn better real languages?
2- What could be the languages I should learn to give me references, I mean, for me to know more cognates and be able to form mental images more easily, with my more vast vocabulary? Are Latin and Greek worth, and what about Indonesian and Filipino?

Why not just learn the language you want? You would be training anyway. There are fictional languages like Klingon, but I think it is a waste of time, unless you learn it just for the fun, but I guess it would be better if you could learn something that you would actually use and have fun in the process.

Something that would be good is to learn some language and then use this new learned language to learn another, without using your native one. This would make you practise both of them at the same time.

So let’s say, for example, that you learned Portuguese and now you want to learn Spanish, you would find it very easy, cause they are so similar in many ways…

I think that to expand your ability to form new images faster, you could read fantasy books and explore the fantasy world. Art, poetry, movies. Anything that increases your ability to use imagination in your favor.

The propaedeutic value of Esperanto is the utility of Esperanto as an introduction to foreign language study and its benefit on the teaching of subsequent foreign languages. Several studies, such as that of Helmar Frank at the University of Paderborn and the San Marino International Academy of Sciences, have concluded that one year of Esperanto in school, which produces an ability equivalent to what the average pupil reaches with European national languages after six to seven years of study, imp...

Sorry for the ignorance in my last response, I wasn’t familiar with this term, guys. I understood things differently when I answered.

The research talks about Esperanto as a preparatory language, but what about for those who already learned a second language not being Esperanto? Would still be useful to learn it or is best to just go for the most used ones?

If you know a Germanic language (like English) and even a little of any Romance language (like Spanish), Esperanto should be pretty easy to learn. I know one person who was conversational within two weeks. It took its vocabulary from common words between European languages and the grammar is perfectly regular.

You can find Esperanto speakers all around the world, so it’s a good way to meet people. There are also many books that have been translated into Esperanto, including things like The Hobbit and Lord of the Rings. There is a collection of free Esperanto books on Gutenberg.

I started learning it as a memory techniques exercise. I haven’t spoken it in years, but the vocabulary I learned still helps me recognize occasional words in other languages. I’d recommend trying it, because it’s relatively easy to learn. It doesn’t require a huge time investment like other languages, and it has some practical value.

How to Learn Esperanto - Art of Memory Blog

Over the past few days I’ve started learning more Esperanto again. Every day, I read some Esperanto, watch some videos, and/or listen to podcasts. Now that my phone has updated to Anki 2, I will get back to memorizing more vocabulary. I’d like to see...

Thanks for your answer, Josh. I’ll look into that.

If that it like Spanish and has a similar grammar structure to it, I could throw myself in the challenge of learning it in one day. I have a good foundation in Italian, Spanish, Portuguese, French, and English, I mean, I know a good number of words in those languages. I also know a bit of Latin and Romanian as I started studying them. If you are good at Latin languages like me, then it is suffice to talk with people, but if you want to boast how good you are at languages, you could just add additionally languages like Galician and Papiamentu to your vocabulary.

Esperanto would probably be really easy for you to learn. Give it a try.

Here are some Esperanto phrases compared with Interlingua phrases. 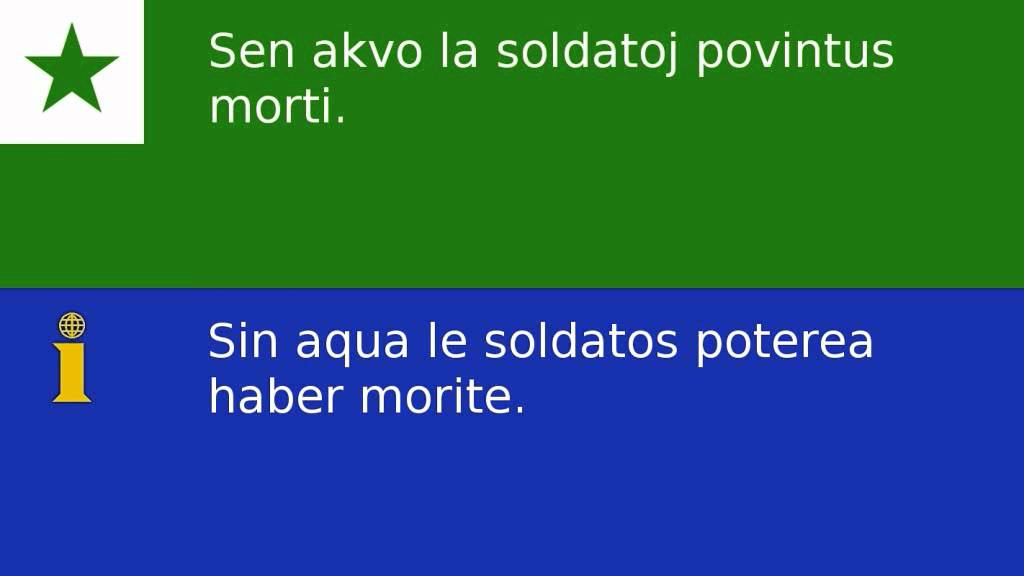 The only problem is mixing up words of different languages. I found by experience that you have to set a time for your mind to absorb and mature well the words you learn in order to create a concrete barrier that doesn’t allow any other content of a different category to enter its space. It makes a time I learned Spanish, but anyways…