This is a continuation of my previous topic about IQ tests, where most people seemed to be in agreement that IQ scores were (for the most part) bogus, and that anyone could learn to score highly on an IQ test with deliberate practice.
Well, the official mensa website disagrees:

“barring injury or illness, your IQ does not change significantly over your life time and that you cannot ‘study’ for an IQ test”

Anyway, earlier today I took Mensa’s official practice test (online), and got a result of 105. Nothing impressive, but slightly above average placing me at the supposed 63rd percentile. 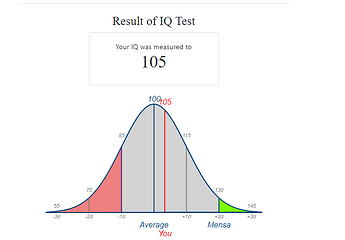 I wasn’t highly motivated, but I did take the test fairly seriously with zero distractions and used most of the allotted 25 minutes so I consider this 105 to be a fair reading.
Over the next year my intention is to study and practice IQ test problems to attempt to improve the score and bust the myth that an IQ score is fixed and does not change. At the end of 2022 I will sit a physical, formal test at a local mensa organisation and hopefully score vastly higher than I am capable of at the moment. According to google, Mensa tests seem to only score up to 160 - so I will attempt to achieve an official score between 150 and 160 (far beyond the quote-unquote “genius” category).

I apologize if the hypothesis which I set out to prove is common sense to alot of guys here, but it just annoys me that so many people are still holding the ignorant belief that “IQ scores cannot be improved over time and you cannot study for an IQ test” so I would like to be living proof that the opposite is true, and I thought this would be a fun project to try.
I will not practice obsessively, but I think a little bit of sporadic work over the course of a year will be easily sufficient to boost my score by ~45+ points (3 standard deviations) to prove mensa wrong

Cool project, Chump! Go for “genius” and keep us posted.

i look forward to following your journey, keep us updated. a while ago I looked into improving the IQ, and of scientifically proven methods I found only one that is relational frame theory, I suggest you to check it out

Good luck on your project, but remember even if you did raise your score it would not “prove mensa wrong.” They are describing a statistical truth about a large population, any given individual might be an exception to the general pattern. Just as a bad snowstorm in one part of the world does not disprove global warming.

Interesting that you’d wish to do so and so!

I have increased my IQ score significantly when comparing the score of now and ~3 years ago.
I remember buying “How to excel at IQ tests”, “Master your mind” and “Logic Tests” by Mensa, and grinding through them page by page, with a fiery passion of thinking and visualising in patterns that can be regarded as eccentric, abnormal or bipolar to the way I usually think; because back then, I thought that in order for me to increase my score, I’ll have to change the way I currently think - as in, “the score I got now, can only be a means as to the way I currently am or think”. But I have to say, that I could only increase it from ~125 to ~137 using the free tests online that are not quite accurate.

Interesting, Coda. Would you say these IQ exercises have helped you become a better thinker or improved your problem solving abilities in general?
I am curious to find out myself whether practicing such IQ exercises could help me memorize better.

Only if you compartmentalise and integrate the things you learn from the exercises to real-life patterns. Otherwise, you’d only become better at solving IQ tests, which is not of use.
And the answer is, yes. 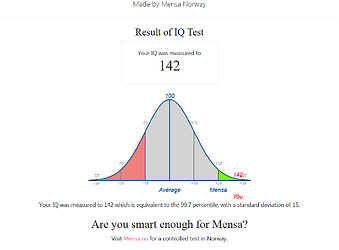 Seems like I do not really need to improve my score, but I am interested in how your progress will go!

I noticed that I am quite good at these tests, so, it would be interesting to see if someone with a “normal” IQ could improve their fluid intelligence in order to achieve what is considered a high score.

I am looking forward to read your updates.

Many of the tasks in professionally administered IQ tests are things that can be improved with practice and/or familiarity.

Examples: calculation speed, auditory recall, digit span, and even some of the puzzles. A person who has never seen those puzzles before will have a harder time than someone who knows what kinds of patterns to look for.

Might I also add, because I seem to have unnecessarily forgotten to mention this, given its immense benefits, that practising Dual N-Back over the course of months (and integrating it to other spheres), can be of much help when it comes to improving or augmenting working memory? I’m verily grateful to whoever made it.

in a book of Eysenck (The inequality of man) in the past I seem to have read that training can allow you to get a better performance. Some people -very few- will immediately find themselves comfortable solving unusual exercises; others -perhaps, the most- will be facilitate by knowing in advance what it is.
Intelligence ( the ability to solve unexpected “situations” in a new -or different- way) is however a very complicated topic.
For i., how is IQ calculated?
(mental age / chronological age) x 100 = QI
Paul is 12; and 12 is his mental age; (12 / 12) x 100 = 100
Chronological age is an easily ascertainable fact; … mental age not.
You had a good idea indeed. Good luck with your work

The formula (mental age / chronological age) x 100 is no longer used to calculate IQ scores. Rather, scores are based on comparison to distribution of scores in a large representative sample of the population. The mean of scores for that sample is set to 100 and the standard deviation is set to 15 points.

I am friendly to the idea that training can improve scores some. But in the face of statements by serious bodies like Mensa and others, it needs solid counter evidence. One self reported anecdote doesn’t much move the needle. It sounds like a fun project but you aren’t going to debunk Mensa with it.

But your plan is even more ambitious, to jump from average IQ to genius with indifferent effort, I wish you luck - I do. But if you succeed how are you going to convince people of this story? It’s a very big claim and big claims require strong evidence.

A cynic might wonder about your baseline: Even though it’s a small percentage, there are still a lot of people with IQ scores of 135 and over. It’s an easy trick for a bright person to sandbag a test. Even without trickery, you were not disinterested when you took the first test and results might be skewed by an unconscious bias.

It would be pretty stupid of Mensa to stick their necks and make an assertion like that if it were not well supported or could be kicked over by a kitchen project. Mensa is not famous for being stupid. One might weigh that against a self reported anecdote of what seem highly improbable results.

If I were a PHD in a relevant field, I’d love to do research on this. Even if the experiment was a flop, I still feel like there’s a lot of unexplored potential here.