GMAT rather than IQ test

I just came across this link: https://gmat.insead.edu and figured I’d share it with you… they provide three different kinds of free GMAT practice tests:

If you are not familiar with the Graduate Management Admission Test (GMAT), then have a look at either Wikipedia or the official GMAC webpage. Personally, as far as its structure is concerned, it’s my “favorite” test when compared to SAT, GRE, etc. or DELF/DALF, DELE, etc. I might be a bit biased though, because I scored in the overall 99th percentile some 15 years ago when I took it… didn’t do so well when I just took the “Micro.”

I got a couple of reason for starting this thread. First of all, you might actually find it useful because you have to take the test. That’s also why I posted it in the #homework-tests category; you’re welcome.

Second, let’s talk about why this might be a better test than an IQ test or why it might not be… obviously, and to get that out of the way first, both are culturally biased. A pretty difficult thing to deal with from a test design point of view. At least the GMAT does not pretend to try and measure general intelligence (whatever that is); rather, it’s an indicator of how well you might perform in business school. Obviously, you could say though “exactly, they’re taking the easy way out.”

The GMAT, similar to your standard IQ test, is graded on a scale. The raw score to get into the 99th percentile in the verbal section is much lower than what you’d need in the quant section to get into the 99th percentile (or any percentile really). All that tells us though is that we teach better math around the world than we do English (duh). At the same time, that is not to say that generally native speakers have an advantage, because you will also find that second language speakers, not as a whole but individually, outperform native speakers.

The reason for that, and the second major issue, is that the test is “learnable.” Really no issue from a business school point of view actually… either you score high naturally or you score high because you devoted time and effort to it (i.e., you showed commitment). In the end, they don’t have to care, because either way, it’s still a good indicator as far as your performance in their program. I do have a bit of an issue though with Indian IIMs that use the test more or less as an entire requirement; whereas, elsewhere they use it as one of their criteria. Maybe some Indian members on the forum would like to comment on standardized testing as far as that.

The question type on the GMAT that I like best (and reason for this post) is data sufficiency. You get a statement and two conditions. You have to answer if the first condition alone, the second alone, both together, neither or individually tell you if the statement is true. Especially in the world we live in currently, I think it’s crucial to know how to determine this. It’s a shame really, that most of the time, any statements gets politicized when really there is also quantitative approach that could be taken. 2 + 2 = 5 should not be a matter of whether you’re democrat of republican… or whatever that means in your country.

Feel free to comment without taking that “micro,” but I’d appreciate if you could just so that we’re on the same page. Either way, let me give you a screenshot of the kind of question I’m referring to… 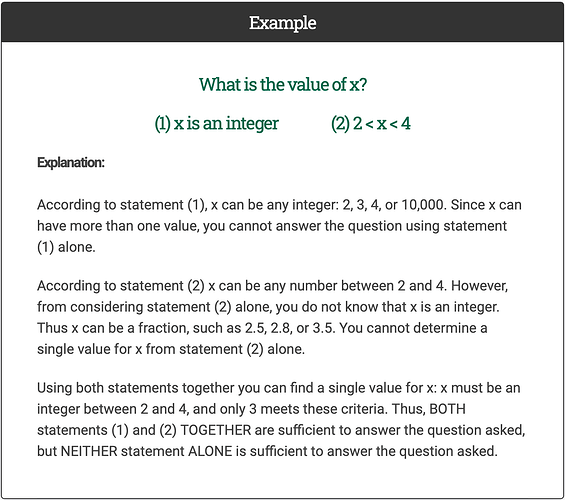 @Josh: I apologize in advance if the mention of the above “world we live in” results in politicized comments. This was not my intention. Also, having been on this forum for quite a while, I sincerely hope that this will not happen.
@albinoblanke: You have always argued that an IQ test should test your “natural” ability. Now, I disagree with you as far as using mnemonics as far as number spans is cheating. That’s just bad test design really and not the test takers fault… there is nothing unnatural about using mnemonics (that’ll remain my stand anyways). What do you think though about the point of “data sufficiency” being more useful, in daily life and general intelligence, than numbers spans are when it comes to intelligence?
@Mayarra: Think you can get a negative score on this test… same as you did on your IQ test?

Anyways, I’d really hear all your opinions on this one… yes, there are gifted programs in certain countries and unless you score high in a standardized IQ test, you won’t get into them… but what do you think of the GMAT instead?

I haven’t had time to try the tests yet, but I’ll take a look soon.

I’m reading a related book on IQ at the moment: The Mismeasure of Man by Stephen Jay Gould. I’m only halfway through, but it’s worth reading so far.