I’ve been thinking a lot recently about how to use and extend the ‘memory palace,’ so to speak. I was surmising that possibly - (I’ve yet to experiment with this) - the powers of the memory palace could be extended by visualizing a role play within a room? It just strikes me that actors and actresses are fantastic at flawlessly remembering their lines throughout a play (Hamlet, for example), and this may stem from, partly, from the chronology of the play (what scene it is, for instance), movement, and gesticulation. Therefore, having a character reenact a story within a memory palace may be useful (though I’m recognising that this may be far off base). Or, perhaps, because a memory palace is purely visual and spatial, would I have to imagine visually encoded speech bubbles?

Using a memory board (or a Lukasa board), do you encode the pins, beads or shells the same way that one uses a memory palace? So that each pin or shell represents a memory palace or journey? And therefore the beads, shells and pins just represent as a stimulus or symbolic representation of an encoded memory palace with specific information?

Apologies if these question has been asked before,

Therefore, having a character reenact a story within a memory palace may be useful (though I’m recognising that this may be far off base). Or, perhaps, because a memory palace is purely visual and spatial, would I have to imagine visually encoded speech bubbles?

I always try to incorporate movement, action and emotion into the information I put in my memory palaces. When I have to memorize a complicated concept, I often have the people in my palace discuss it or act in a way that corresponds with the concept, so it’s a little like a “role play” within the memory palace if you will. No speech bubbles, though. The people just talk in short, memorable “catch phrases” in their own voice. It might also help to have a narrator for some things, I’d use an unmistakable voice like James Earl Jones’. It works for me.

I don’t know what a memory board is to be honest, so I can’t give you my opinion on your second question.

Thank you, Silvio, that is very helpful to know - especially the role play and the distinctive narrating voice.

Addendum: Earlier I was also thinking that is must be possible to have rooms within rooms, or memory palaces within memory palaces? For instance, You look into the sink and see a coin, in seeing the coin you are transported to the surface of the coin. This type of idea could become invaluable when learning vocabulary and verb conjugations, for instance - as you could see a noun, and from the noun brach off into different infinitives and conjugations and gerunds without needing to situate more loci in the room?

Using a memory board (or a Lukasa board), do you encode the pins, beads or shells the same way that one uses a memory palace? So that each pin or shell represents a memory palace or journey? And therefore the beads, shells and pins just represent as a stimulus or symbolic representation of an encoded memory palace with specific information?

I haven’t tried memory boards yet, but I recently bought some beads and supplies for experimentation. I recommend picking up a copy of Lynne Kelly’s new book, Memory Craft, because there is a section on using memory boards (lukasas) in it.

I’m guessing that you can shrink yourself down to “travel” over the surface of the memory board so that the beads, shells, and markings become the locations. The appearance of each location could be linked to the mnemonic images at that location.

There are a couple of nice examples here: 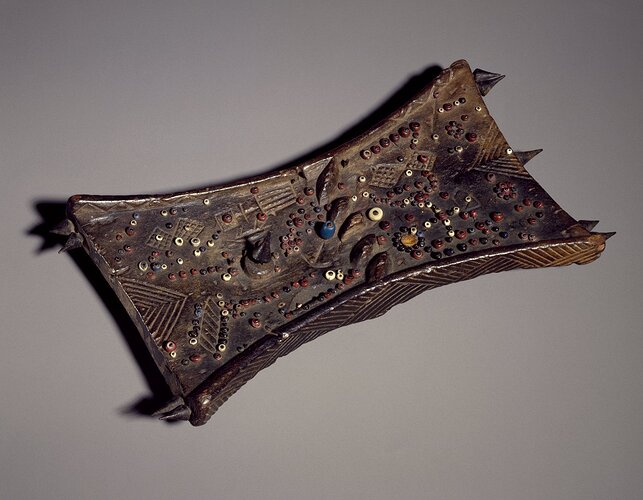 Zooming in on the picture in that article shows some interesting detail: 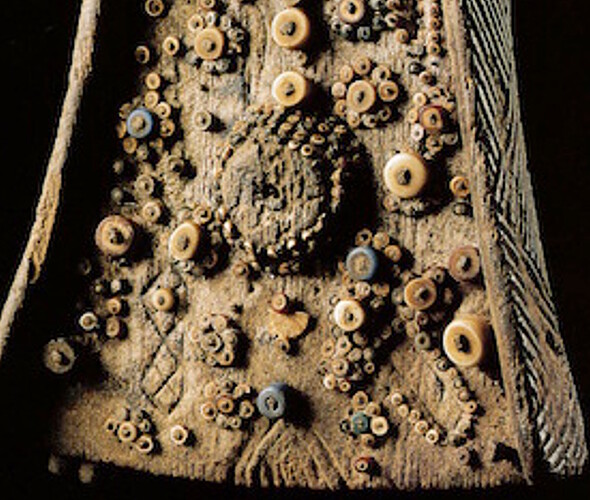 I’m going to experiment with it as soon as I’m finished with some site updates. 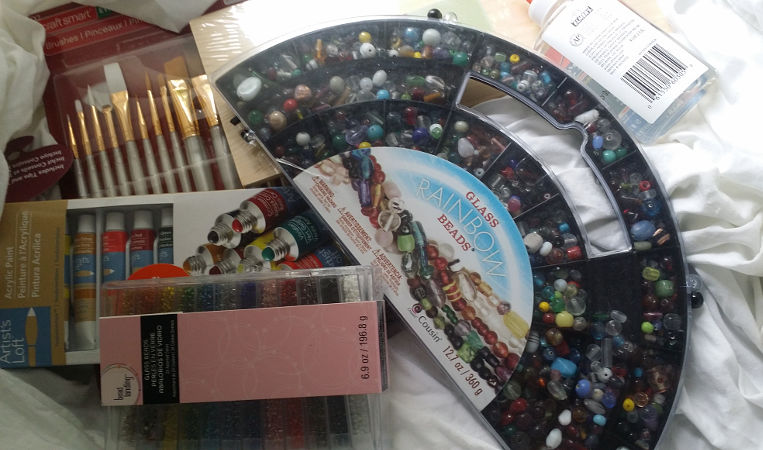 Thank you, Josh. A very informative and comprehensive reply.

How did the experiment with the memory board go? I had never considered shrinking myself down and travelling over the board, but it sounds a very intriguing method. I don’t think I had considered it because i had not seen the Lukasa board close up. So thank you for those excellent pictures of the Lukasa board; it really illuminated how closely densed and packed the beads and shells are, illuminating how your suggestion would worl.

I had never thought of shrinking myself either. What an intriguing idea!

I constantly use two memory board based on the lukasa. I have also used etched and illustrated boards based on many other indigenous memory devices including the Australian Aboriginal tjuringa or the Native American birchbark scrolls and song boards. But they are effectively the same as the lukasa. I know many people who have created lukasa based on the information in my previous book, The Memory Code. I didn’t realise then that people would react so well, so in Memory Craft, I explain using them much more thoroughly. Josh has an advance copy. It is published on June 3 2019.

I do use each bead, or group of small beads or carved portion of the board, much as a single memory palace location. I did not believe this would work when I made my first board but found it extraordinarily effective. My most used lukasa now acts as a field guide to the 412 birds of my state. I don’t need it with me to use it, I know it so well.

There is a whole tactile aspect. The boards are used by traditional owners by touching each bead and telling the story connected. That is what I do. Most stories are very brief - the usual sort of memory image, but I then add to them as I add more complex information.

The position on the board, the feel of it, any wood grain around the bead, connections between them … all sorts of things will appear for you to imagine into the knowledge. I know it sounds far-fetched, but during my PhD research I found these devices in use in non-literate cultures all over the world. And those guys memorise vast amounts of information using landscape memory palaces as well as memory boards, so I should not have been surprised how well they work. I also sing the board structure - just the name of each bead.

It feels different mentally to using a memory palace. It is very difficult to explain, but I now know many people who have tried using a board based on a lukasa and use them constantly now. I am afraid that the only way is to try it yourself. I look forward to Josh’s response!

Here’s a picture which gives the scale and how perfect it is to hold. 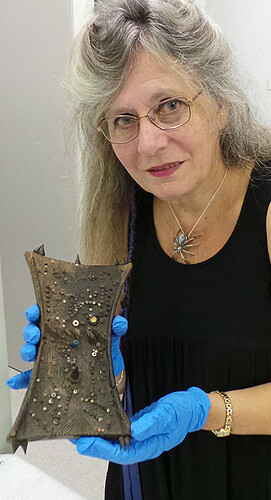 I haven’t used a memory board yet, so I don’t know if my guess was correct. I was just speculating that people might zoom in on it like a miniature landscape, because that’s what I do in smaller locations.

I glued together a quick prototype last night. It doesn’t look good, but I’m going to try to memorize something on it tonight. I glued some of the smaller beads in locations that can’t be touched, because they are too close to larger beads. I’ll fix that on my next version.

Here’s a picture which gives the scale and how perfect it is to hold.

That’s great. I’ll try to make my next one closer to that size and shape.

For instance, You look into the sink and see a coin, in seeing the coin you are transported to the surface of the coin.

I do something similar all the time when learning laws. I often use an iPad as the link to other memory palaces. As there are regulations on federal, state and municipal levels, it’s important to be able to make links between different laws. For example when I have a specific article of a federal law, where I want to link to a bylaw of a canton (state) which is about the same subject, I use this method.

On the screen of the iPad I see the location of the other palace. Sometimes I need to link to multiple other palaces, so I just have multiple tabs open on the iPad (it doesn’t have to be an iPad of course, any screen or anything you like can act as the link between the palaces).

I haven’t really used it for vocabulary, but I’m sure it would work just as well.

I found it helpful to combine different techniques to get the most out of them.

I’m guessing that you can shrink yourself down to “travel” over the surface of the memory board so that the beads, shells, and markings become the locations.

The shrinking yourself down that @Josh mentioned, can also be used in normal memory palaces. I’ve done that when I had to add more information to some of my palaces due to additions to the laws (where suddenly instead of just one Article there’s 15 since they just added 14 to the same topic). I usually use big locations so when I go in a little more detail, I can make a lot more smaller locations. For example when the initial location was a bed, I can “shrink” myself and use all the edges, I can use above and below the bed etc. To be able to do that, you probably have to know the location well. But it works

Lynne, do you have a US publication date for The Memory Craft yet? Just wondering if I need to order it from Book Depository like I did The Memory Code. (I couldn’t bear waiting for the US release of that book either!)

Thank you for your thorough and comprehensive reply. You have given an excellent overview and personal perspective on what it is like to use a memory board - emphasisng the tactile nature of it. I really must make myself one as it sounds an invaluable memory device.

Thank you for your response. Your iPad idea linking memory devices sounds awesome and a brilliant way to link different laws. Thank you.

Smaller beads that can’t be touched are fine. I have some of those. Trying to touch them is a different feel, so that works too. It happens that one of my untouchable beads is a bird family that are very shy, so that worked a treat when adding in the behaviour of the birds.

I’ve never thought of the shrinking idea. I can’t wait to try it!

Thank you so much. The same publisher, Pegasus Books, will be publishing the North American edition of Memory Craft, but I don’t have a publication date yet. So it will be quite a while after the Australian edition is available on BookDepository. Thank you so much for such a lovely comment!

Is your book going to be available here in Europe, too?

It will be published in the Uk for Europe, but I am not sure when. Meanwhile, it is available on BookDepository. Sorry I can’t be more help - foreign publishers are still being negotiated by my Australian publisher.

Thank you so much for asking!