Developing a Mnemonic System for Music

Is there still interest in this thread?
I agree with Mindnaut and would favor a “movable do” system, mainly because it reveals relationships between notes more easily.
Furthermore, it adds something new. We already have names for the individual notes’ absolute pitches. Those are the note names: C, D, E, F, etc.
What we don’t have, without the movable do or a numbering system, are names reflecting relative pitches. There’s numbering, of course. But I think Do, Mi, So are more singable than I, III, V but otherwise would do the same work. What do others think about that?
Further, wouldn’t the solfege syllables chunk more easily than the numbers?

Hi. I studied solfege with moveable do at college. Useful for training the ear and for remembering tunes. What I’m interested in, is anyone using a peg system to remember the keys to tunes?
I play a lost of jazz and struggle to remember the key tunes are in when memorizing.
I’ve developed a sort of system, that I haven’t seen elsewhere.
Each Letter name is an animal, (cat, dog, etc) Flats are Australian animals and sharps scary Australian animals.
So if I’m in E, then its an Elephant paired with an image suggested by the title, or if its Eb its and Emu.
I do find that its difficult to make the images vivid or ridiculous enough to stick. I also ended up with a lot of images with the same animal (eg Bb, Eb and F quite common in jazz).
But some do stick, Like A Train is in C (Cat on a train)
The difficulty can be compounded by the fact I play Flute, Tenor and Alto, so playing in C, Bb and Eb. I tried remembering all tunes in C, but that doesn’t seem to work as well as remembering the key I play the tune in.
Has anyone had experience with a similar type of system? 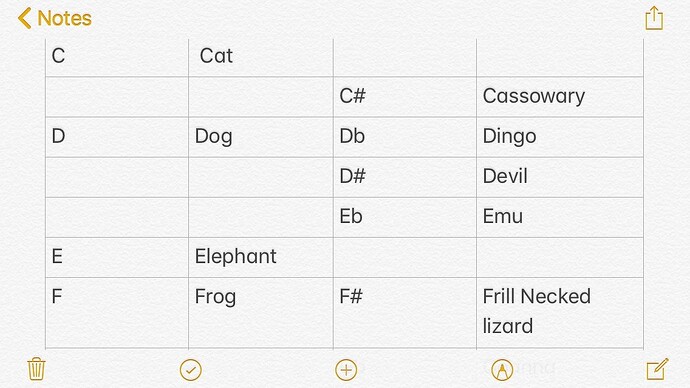 I do find that its difficult to make the images vivid or ridiculous enough to stick.

I wonder if the images would stick better if you made up a line of lyrics about the animal, and sung it to the melody a few times.

Another way to separate things into categories when there are a lot of repeated images is to put them in different locations. All the Bb songs could go in one location, all the Eb songs in another location, etc.

I was taught using “fixed” do, and decided about six weeks ago to change to “movable” do.
I thought I could more easily feel the relationships between notes with movable do.

What do others think?

And do you have any updates? It would be interesting to hear if people have made progress and what methods they feel have helped!

This reminds me of one of my first experiments using memory techniques.

I had just finished O’brian s audio book, ate my supper while meditating about it all, and laid down to sleep for the night.

I coudnt sleep ! I kept reliving a memory journey Dominic had taken me on and just had to make my own. But I didnt, and instead this is what happened :

my eyes shut, I started trying to place things, anything, around my appartement as I imagined it to be, but I stopped at my piano and I started to place things and people on the keys, mostly people. What did Do make me think of ? my friend Dorina, so thats where she lived. Then I had the instinct to place whomever Dorina made me think of first (her sister), and placed her on the next Do. To my surprise, I had covered all my 88 keys without making any effort. It was very satisfying and relaxing and fun ; there are even a few animals, for example where a giraffe comes right after an elephant which comes after a bear, using sizes to help me choose what to put !

It didnt even take an hour and I slept like a baby. After a while, I placed them directly on sheet, and started to learn entire pieces.

Since I know most of the pieces I want to learn and since there is youtube for the audio, I never have the need to memorize anything else but the notes.

I combine my people and place them in a memory palace or journey.

Hi, Josh.
How are you doing with your musical pursuits?
I know you were trying to develop a mnemonic system for music. How is that progressing?
I am trying to do that too. I’ve experimented with movable Do but I believe now that fixed do is simpler and better. I do like to use the chromatic variants. That means “fi” is f-sharp, “di” is C-sharp, “te” (pronounced “tay”) is B-flat.
Those are the main ones I’ve encountered. You can use “Si” for G-sharp if you have “ti” as B and not “si” (as some do)

I tried the curwen handsigns and they don’t seem to do me much good.
I do feel that “higher” notes are really “higher” in a physical sense and I do find myself using my hand to “mark” a note and a higher note.

My latest strategy is to take a song that’s already an earworm and is running in my head and to find the music for it and then go over the solfege. It’s interesting. So while I’m waiting in line at the store, for example, and the song starts in, I can use those moments as music training, either trying to figure out the solfege or, if I’ve reviewed it, rehearsing it.
I think this method could be very effective. Sometimes I create a mnemonic to help me with the first note of a song or a mnemonic to remind me of intervals I was getting wrong.

I look forward to hearing where you’re at with all this.

This is a great idea. How is it working for you? Have you experimented with any strategies for remembering chord changes? I am also a jazz musician too and I’d love to chunk and store harmonic movement in a memory palace to commit more songs to memory.

I’m curious if you are still using the strategy 5 years in. How is it going?

I really like what you’re doing. I’d love to get more of a detailed account of your process and how it’s working a 5 years later. Thanks!