Creating an image for syllables to help recall abstract words

Newbie question.
Is it a good idea to create an image for each syllable to help to memorize abstract words?
I’m having a hard time memorizing those so I figured that might make it a bit easier.
Let’s take a word Career as an example.
For syllable car I have created and image of my car and for er I have created an image of emergency vehicle. So the image for career would be rear-ending emergency vechicle in my car.

Is it a good idea

That (i.e., good or bad) depends entirely on your personal preference and whether you can work with it or not.

If you want to go the syllabary route have a look at hiragana / katakana and just use the images that people use to learn Japanese writing (…alternatively, have a look at hangul or devanagari): 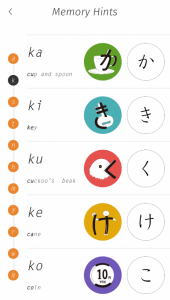 It has the advantage that you can reuse your existing binary system and you can use standard braille text on the internet to practice reading. I have a description in this post how you can practice writing on your phone as well:

…and here the rest of the alphabet: You can connect them to your existing binary system by placing the binary system’s object next to a picture of the letter the cell represents. You can find anima…

Either way… in terms of good or bad as far as I’m concerned… I prefer to build on top of existing things… that being a syllabary like hiragana or using braille for individual letters rather than creating my own standalone solution.

That’s really all you need! As you did, as you get to the words, whatever comes to mind, use that. I have been remembering hundreds of words exactly like that. What will make it work is good revisions and actually using the words. Putting it in a memory palace will give you many advantages like being able to use them anytime soon without having to fetch your notes and remember many more!

If rear-ending an emergency vehicle is a memorable image for you, then you should absolutely use it. For me, it wouldn’t be exaggerated enough. I might picture a car with a large, human “rear” end. Or try saying “Career” aloud, emphasizing the second syllable; to me, that could sound a bit like a revving engine, which might tie in with someone eager to race ahead with their chosen career.

For me, it wouldn’t be exaggerated enough.

the image for career would be rear-ending emergency vechicle in my car.

Maybe the fact that it’s his car makes it memorable enough in this case, but I’m with you… car + roar for a Formula 1 race-car, which is a car so loud you can hear it in your ear. Then add the logic that: the guy with the loudest car will have the best career… and thus link it back to the meaning of the word.

I think it depends on the abstract word in question though… are we talking career (s. above), good (angel), bad (Michael Jackson) or SAT words? The former just being a case of placing an image in your memory palace that is a concrete noun as a stand-in for the actual word but the meaning is known or the latter where you want to memorize new words and their meaning.

Additionally, are we trying to get the spelling right as well… neither car + rear not car + ear would cover that. @cr4zy1w4n are you talking about abstract words like this:

30 atrophy - an aging bodybuilder with “a trophy” from back in the days when he was big. Alternatively, watch a lot of House, MD and you’re familiar with the word anyway.
64 cerebral - via Spanish or X-Men
65 chagrin - via French
66 charlatan - via German Scharlatan
79 concur - google “I concur meme” from Catch me if you can
99 debunk - simply debunking a bunk bed
147 dogmatic - being pragmatic by sending a dog (replace prag-) to automatically convince you of my opinion
191 facile - via French or Spanish
301 nebulous - via German Nebel (eng: mist)… hidden in the mist
327 peevish - old guy getting up at night to pee wishing he had a younger prostate
378 reap - the Grim Reaper collecting souls

…how many of those can you actually work with the word itself like in 30, 99, 378 rather than using the syllables as in 147, 327? Also, if you speak any other languages sometimes you can oftentimes just take that shortcut.

@RMBittner
There is no actual meaning. What I did is memorized syllables and linked them together

for syllable “car” I have an image of my old, noisy car with wonky tyres
and for syllable “er” I have an old emergency vehicle with a loud siren and my link in this instance was a crash between the two which for me is exaggerated enough to remember it.
English is not my first language which makes memorizing abstract words a bit more difficult, so having a list of set images for syllables allows me to create images for words very easily without even knowing the meaning of it.

Blockquote
I think it depends on the abstract word in question though… are we talking career (s. above), good (angel), bad (Michael Jackson) or SAT words?

It’s neither of those. I have a list of most common syllables and work with that.

Getting spelling right would be a bonus, but with the above system this is not always possible.
From the above list I could probably work with the word in 80% cases
I would have to use my system for 327, 191 and 378

This helps to remember the sound of the word but how does it link the meaning. I would guess that both you and I knew this word anyway without mnemonic support and therefore it’s difficult to use as a test case. I don’t think one needs a lot of detail in remembering the sound. A hint is usually enough to bring the whole thing back. In memory work you still depend on your natural memory - the mnemonics are to help and enhance it.

Here’s a word I learned recently. “Metonomy” Using part of something to refer to the whole or the converse. e.g. “Boots on the ground” - meaning soldiers not just boots. “The Pentagon” to refer to the military etc.

I use the phrase “Met On My Sofa” to get close enough to the pronunciation and I have an image of a soldier, sitting on a sofa with his girlfriend offering her one of his boots. Metonymy (/mɛˈtɒnəmi/) is a figure of speech in which a thing or concept is referred to by the name of something closely associated with that thing or concept. The words metonymy and metonym come from the Greek μετωνυμία, metōnymía, "a change of name", from μετά, metá, "after, post, beyond", and -ωνυμία, -ōnymía, a suffix that names figures of speech, from ὄνυμα, ónyma or ὄνομα, ónoma, "name". Metonymy and related figures of speech are common in everyday speech and writing. Synecdoche and metal...