For anyone interested in the human microbiome, here’s an article that suggests that an autoimmune disease (Crohn’s disease) might be caused by the development of refrigeration, which increases the amount of certain bacteria that like the cold.

In 2003 we proposed a working hypothesis on the aetiology of CD: the cold chain hypothesis. According to this, the development of industrial and domestic refrigeration has led to frequent exposure of human populations to bacteria capable of growing in the cold. These bacteria, at low levels of exposure, particularly those of the genus Yersinia, are believed to induce exacerbated inflammation of the intestine in genetically predisposed subjects.

In summary, data from recent years provide additional elements in favour of the cold chain hypothesis, which is now supported by a large number of independent observations from epidemiological, clinical, anatomopathological, microbiological, and molecular studies [Figure 2A]. With time, the hypothesis thus becomes more and more valid in proposing a comprehensive theory to explain the causes of CD; but as no single experiment can definitively confirm the theory, we must continue to test it with additional works. Among them [and even if insufficient to definitively validate the hypothesis], a randomised clinical trial comparing patients with low versus high exposure to Yersinia would be an important step.

This illustration from the paper illustrates the idea. 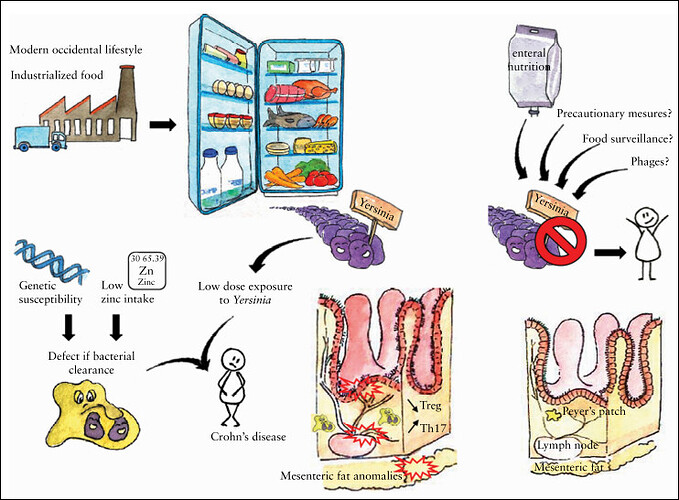