Can I Reach B2 Level In German From Scratch in 3 Months?

Hi! I’m a completely new German learner, I just know some very basics sentences and grammar. And I want to try to use memory techniques to pass the test level B2 in 3 months. Do you think it’s possible? Any clue about how many vocab should I learn (They claim for about 4000 words). And what textbook or progress I should follow. Help me reach my goal! Thank you every much!
I use the Basic German Vocabulary - Langenscheidt for vocab and a really good book in my language for Grammar. But I’m stuck finding a resource to practice and putting all of it together. And one more thing, do you have any recommended on practicing for writing book

If you have an affinity for languages, it can be done, but it is dependant of a lot.

For example, I am dutch, it is relatively easy for me to learn a language like German because it and Dutch are very similar.

Also, using memory systems to learn a skill -like a language- is in my opinion tough. Compare it to learning how to ride a bicycle. Memory systems can help you memorize the workings of a bicycle, the relation between the motion and balance, traffic rules, and some signalling to make known what you want to do. However, even when knowing all that, you still can’t ride a bicycle, because you lack practice.

Language is very similar. Sure you can memorize words, grammar rules, etc. But using that to speak a language is like trying to have a conversation in that language while carrying a grammar book and a dictionary, using those to make your sentences. And while you can argue that it becomes easier after a time, that is still because of a missing ingredient: Practice. You need practice, you need to read, write, speak and listen to it.

Do you think it’s possible?

Passing a B2 test with three months of practice is definitely possible; however, that is not the same as actually reaching B2 in a certain language. Probably not your goal anyway.

Familiarize yourself with the test and the score you need to pass. I don’t want to simply assume that you’re going for the Goethe-Zertifikat B2, so let me use the French DELF B2 instead to illustrate my point here. There are four sections: listening, reading, writing, and speaking.

Each section is worth 25 points for a total of 100 points. You’ll need only 50 points total to pass; however, a minimum score of at least 5 points per section is required. I.e., 20 points in the other three sections will not make up for only 3 points in speaking. 15 points across the board and 5 in speaking will however let you pass.

First things first, understand the requirements of the test you are trying to pass.

But I’m stuck finding a resource to practice and putting all of it together.

This is the official test prep sample from the Goethe Institute for B2: GOETHE-ZERTIFIKAT B2 - Lesen which you can find via this website:

Any clue about how many vocab should I learn (They claim for about 4000 words).

Who is “they” here? The CEFR doesn’t give an exact number as far as the vocab or which words… it describes the skills you have at this level. That will include a command of the tenses formed with the auxiliary verbs “to be” and “to have” (sein und haben in German).

Those two are early in the Top 10 verbs in any German frequency dictionary. Just like understanding the difference between first and second conditional in English, this is not just a matter of vocabulary.

a really good book in my language for Grammar.

easy for me to learn a language like German because it and Dutch are very similar.

I’d be helpful if you could tell us what your language is, because chances are you’re better off learning German from English, seeing how you speak that as well and just like Dutch and German it’s a West Germanic language, albeit with a lot of French vocabulary. So unless your language is closer to German on this tree, you’ll be better of learning German from English. 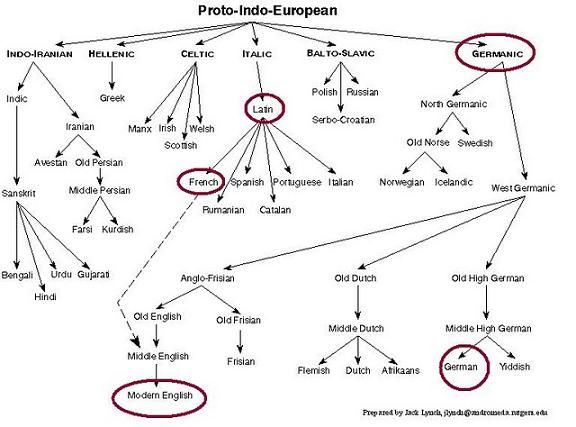 And one more thing, do you have any recommended on practicing for writing book

What do you mean by that?

OMG first of all, thank you so much. About 4000 words, I read it here: https://universeofmemory.com/how-many-words-you-should-know/

And one more thing, do you have any recommended on practicing for writing book

I mean I want to find a book that efficient for practicing writing skill. And especially for the Goethe exam, like writing letter, invitation,…

I guess you saw on that same site this “case study”

HOW TO LEARN GERMAN FROM SCRATCH TO A B2 LEVEL IN 5 MONTHS: A CASE STUDY
https://universeofmemory.com/german-from-the-scratch-b2-5-months/

sound like your title except with 2 extra months, and since it’s the case study he publicizes as “hard to believe,” I would say what you want it’s kinda hard.

About 4000 words, I read it here: https://universeofmemory.com/how-many-words-you-should-know/

Okay, that’s a blog by some random guy… why are you looking there instead of at the source? The Goethe institute has word lists published for A1, A2, and B1:

Starting at B2, you’re pretty much expected to understand unknown words from the context and/or by using a monolingual dictionary, so forget about…

…and use the official Duden instead: Duden | Wörterbuch

OW TO LEARN GERMAN FROM SCRATCH TO A B2 LEVEL IN 5 MONTHS: A CASE STUDY
https://universeofmemory.com/german-from-the-scratch-b2-5-months/

Basically that and do twice as much work every day to get it down to three months. Alternatively, you could read what I wrote here…

What is the best approach to learn new vocabulary of a second language using a palace of memory?

This approach will basically put you at an A1 level after the first week, A2 at the end of the month, and B1 by the end of the second month. Spend the third month reviewing you leftover vocabulary from the review in week 8 and turn off the subtitles when you watch your sitcom(s). That should put you at B2 by the end of month 3.

I want to find a book that efficient for practicing writing skill. And especially for the Goethe exam,

The first link I gave you covers all three modules… just click on the tab “Schreiben” (Writing):

are you sure you’re thinking of B2 and not A2? The text you have to write is a bit more sophisticated than that. Anyways, again… forget about whatever books or random guys blog posts. The Goethe institute tells you the scoring requirements on the page. That is what I meant when I said:

familiarize yourself with the test and the score you need to pass. 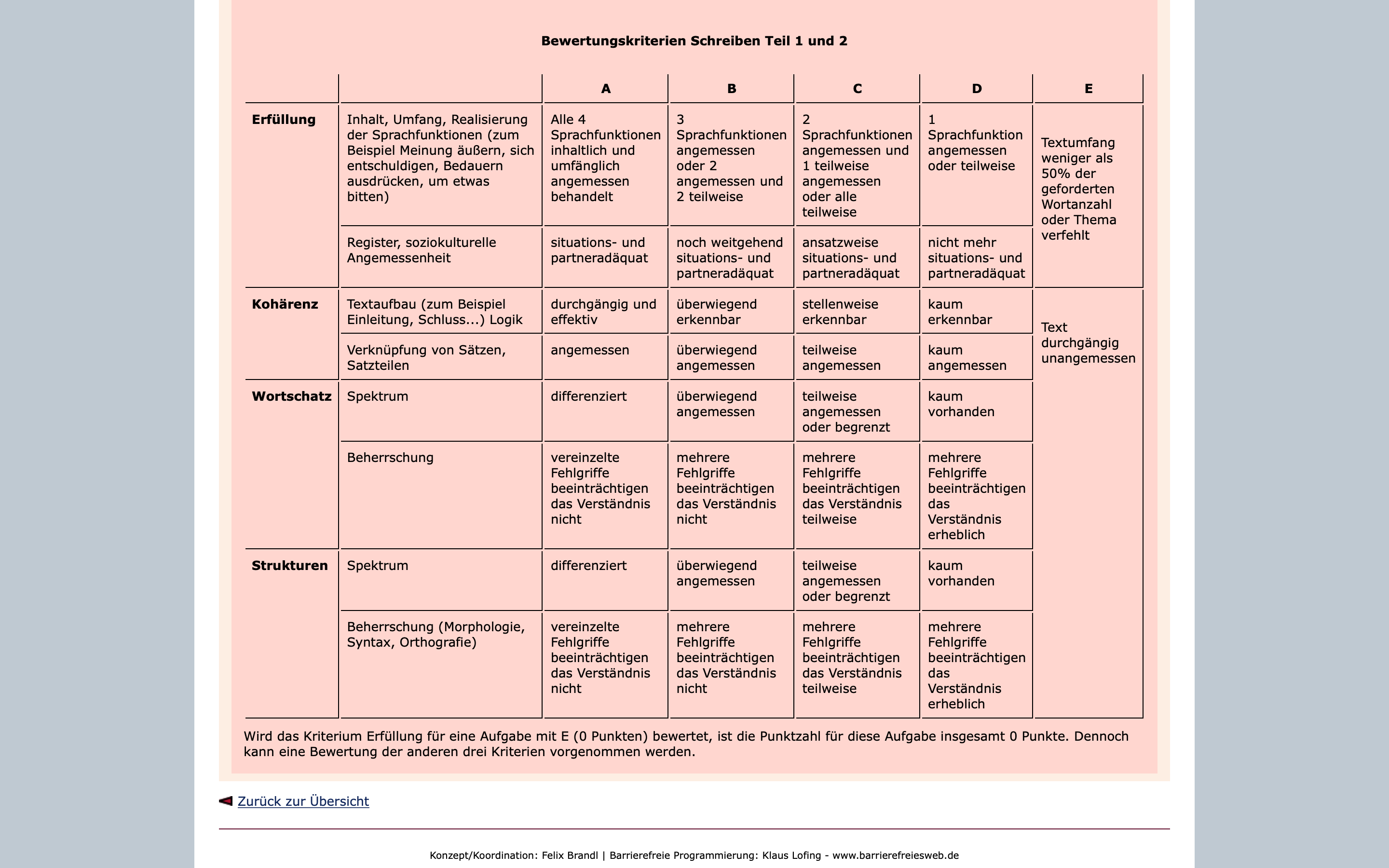 Just follow the right structure, know the appropriate conjunctions to structure your sentences and argument.

Thank you soooo much, once again!!! It’s so much in details. I’ll try to follow your instruction

yah I know, it’s kinda like mission impossible but I just want to try as much as I can to see how it’ll turn out at the end. Reach B2 in any language is hard though, especially German with those grammar, kinda crazy but who knows

So, how you doing there after your first month… it’s been 28 days since you’ve asked your question. You should be at least a comfortable A2 by now if you wanna get to B2 over the next two months. Any updates?

Hey, thank you for your asking, I’ve been doing fine but I realize that I couldn’t remember all the massive vocabulary that I’ve set goal. Not because I’m too busy but maybe my mnemonics is not vivid enough and I use anki to revise. And I still have hard time using grammar I guess I need sometimes to be comfortable with in, like for it to go into the subconscious mind needs time. I can read simple stories pretty well now, but for news I’m quite struggling. But speaking is on a different level, I can make basic greeting,… but I can’t comfortable and confident to make a full conversation and still make a lot of mistakes. And writing for the test is fine because I have some samples. I took the B1 sample test on the internet already but the result wasn’t good enough so I couldn’t say that I’m confident in my ability at the time. I’m still trying hard but… maybe B2 is a bit out of reach in 3 months for me. But your method really help me through the way, thank you so much.

From memory of having sat for both, the distance between B1 and B2 is large.

B1 in three months should be doable, but remember:

Passing an exam and being able to speak or read an intermediate-level book are not the same thing.