A 4 Number digit system!. Is it POSSIBLE?

A 4 digit system!
Is it possible to create and memorize?
These thoughts have been hovering in my head for a while!
Your thoughts?

I am not sure Simon Reinhard is a 4 digits system user. Can anyone tell me?

its 4 digit rn I checked

lmao I hate to spam 4 posts about this, but I was wrong its a 3 digit system as of 4 days ago 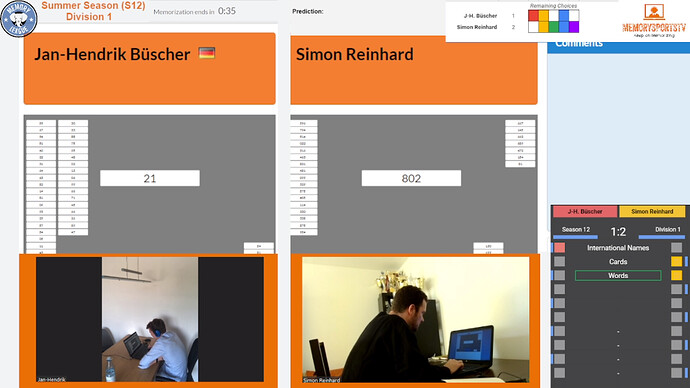 Reinhard hasn’t ever told anybody what his four-digit system is?

Even mastering a 3-digit system is hard, I can’t imagine how you could get enough practice to quickly remember the image that the 4 digit code corresponds to, unless it is some sort of person-object system.

Yeah…
I was thinking this!

Even your number system is special. As far as I know you are the only memory athlete using a 4-digit system with 10.000 images. Why are you doing that, how much effort was it and do you think it is superior to a 2-digit Person-Action-Object system (PAO)? Keep in mind that Jonas von Essen became the World Memory Champion with a small system.

Simon: I felt compelled to switch to a 4-digit system because at the World Memory Championships 2009 I still used a 3-digit system and simply couldn’t get enough speed to get reliably above 320 digits in 5 minutes. And that was just not enough, even by then. I was already playing with the idea since 2007, reading license plates on the street and things like that. This system is an extension to my old one-syllable 3-digit system. It took some time until I noticed I could do more than 320 reliably. But it was worth it. It was like a new continent to play around. Because nobody knew what would be the limitations, so I relied on my feeling and intuition. What I did not do was to create a 10.000 image list. I think that is completely crazy and doesn’t make sense. But in most cases I was very quickly able to find an improvised association for a 4-digit number, based on my 3-digit system. Then I simply started memorizing. I thought I just need the first association anyway, so why not develop it why I try memorizing it. That worked also very well with my 2-digit card system. So you don’t have to memorize a list and then use it, but instead use it right away while you create it. I think that is the approach that everybody could take.

Finally after some time of being slower with it, I started feeling confident about it at the World Memory Championship 2010, which was the first WMC after I made the switch. There I noticed I could get scores above 320 digits in 5 minute numbers, with not so much effort. I also noticed it helped me much with the longer disciplines. It is a demanding system but the construction is not so bad. As of now I think I should have seen every of the 10.000 images once or twice. I am interested how far this can be taken. I don’t use it for Spoken Numbers yet, though. That is an interesting upcoming experiment for me, which will be the last step until the system really is perfected. I still see quite some potential in Speed Numbers and the longer number disciplines. And I noticed a jump from last year in my ability in memorizing 30 minute numbers.

I really think it is superior to a 2-digit PAO system. Jonas von Essen didn’t become World Champion because he was so much superior in numbers but because he was great in the overall ranking. But in the long run, a 3-digit system used as masterfully as Johannes Mallow does or a true 4-digit system should be superior. If you have for example twins, with one putting much effort in a 4-digit system and the other into a 2-digit PAO, I think the results of the first would be better. Maybe if you train your 2-digit PAO so much like Wang Feng did, the three images merge together into one and ultimately become more superior. It would be easier to find lost images. But only time can tell in that regard.

If one had to decide who is the most talented and successful memory athlete of all times, there would probably one name pop up among the few chosen ones, that everyone has heard about. We talked with Simon “The Flash” Reinhard and asked him for his...

I am sure I have seen someone doing this or planning it. His plan, I think, was to do 00-99 as a PAO, then 100 to 999 as a PO and then go up to 9999 with just people.
I am not sure I want what this offers and the trouble I am having remembering just a PAO and the trouble I had creating it to start with just makes this sound like so much work.