This is rather based on something strange but ancient I discovered quite a few years back that still strikes me with mystery these days; it is highly of interest for memory and training.

I had a period in my schooling years where I was attempting to write with my left hand, in general that sort of thing takes time and I was making little progress and barely visible progress.

At the time having played a lot of finger intensive video games, I was used to the burning feeling of exercise on my fingers so had a relatively high tolerance for such pain and noticed that my left hand was more vulnerable than my right to this kind of pain. As such I vented my frustration into writing random things for 2 hours straight, from combinations of letters to words as fast as I could (it looked like scribbles at some point), I felt some relatively severe pain in my hand during that time which gently subsided repeatedly throughout the time frame causing me to consciously attempt to speed up.

It looked very hopeless my writing was worse than when I started due to the pain, however at the 1:45 hour mark suddenly my handwriting changed drastically. I don’t mean a little better or a little faster but all of a sudden my handwriting was better than my right hands. At the time I believed, that something was very broken, it didn’t make sense to me that my hand would suddenly after 2 hours despite all the general right handed writing I had done all my life up till then suddenly ‘get beat’. I expected this to subside when I went to sleep, instead I woke up and wrote even smoother than the day before, it also did not look very normal, my form was strange my letters were made up of much straighter lines than on my right hand but the speed was faster than my right and the neatness better. I also noticed that my hand had some form of ‘tone’ to it before my writing improved so drastically.

Now where things get a little more interesting, a few years later I made one of my friends attempt the very same thing and they seemed to have the exact same results I have had. For them it did not entirely beat their right but was sufficiently close to it, from an almost hopeless start. Seeing this I started to run a few more tests with this friend and did other things for this time frame, simply because even though we are so different it took us the exact same time down to the minute.

We tried reading as fast as possible and similarly strange things occurred, namely we kept getting out of focus and spent time refocusing to keep the intensity high, at around 1 hour 15 minutes we got extremely tired so tired that we were passing out, then suddenly when the usual time was hit all those symptoms vanished, there was a headache and the text we were reading felt cleaner, though we didn’t really get much faster.

We tried to explain this in a lot of ways because there is no logical explanation for the time to be the same for something as plastic as a brain activity. As such we hung it on intensity. Now that I am more educated however, I do find this of strong interest because it caused exponential growth in skill of some sort, which also lasted for a long period (I can still write with my left hand sufficiently though not as neatly as back then). What is interesting is that it required working as hard as you could in that time.

I am curious if anyone has experienced something similar, or even if someone will try something similar and share any results. 2 hours for me is a lot of time these days and there are only so many 2 hours in a day so I can’t try enough things in time (not to forget that the intensity without any form of break is unbearably difficult). Given there was some kind of success with reading and with writing which are very different processes I would assume this applies generally. I would just highly doubt something like this applies only to us. It is also unlikely to be something that many others have tried I assume because it looks hopeless until that very instant change occurs and also because as I had explained with reading, we were passing out and the only thing that stopped us was the fact that we wanted to pass the 2 hour mark as a test (2 hours being the bound to securely assume it has failed).

As such I thought I would share this, feel free to leave any comments, questions or replies.

This is very interesting, thanks for sharing your experience! I haven’t tried this technique before, and definitely would never have guessed the kind of results you experienced, so I too would be interested to hear if anyone else has experienced this phenomenon.

P.S. Based on the thread subject I was expecting something very different. May I suggest editing it to clarify for others who may be interested in this subject? Something like “The 2-hour mark: High-intensity focused training to make breakthroughs.”

Thanks for the interesting topic! Maybe it has something to do with a hypothetical construct called BRAC (Basic Rest Activity Cycle), which is said to be between 90 and 120 minutes long for most people. There is a theory that some ion pumps in the brain cell membrans can’t keep up with the speed ions are released into the synapses. So after around 1 to 1.5 hours of intense training there will be a twenty minute phase of recovery, marked by drowsiness, day dreaming and decreased activity in the exhausted brain areas.
The boost in ability after two hours could be a consequence of (at least partially) restored neurotransmitter depots. It would be interesting to see if this effect also occurs when you train for 1 hour 15 minutes, then take a twenty minute break and start again.

I think I’ve also read somewhere that deliberate practice shouldn’t be done for more than 90 minutes without a break, but I’m not sure about that.

Be careful about hand pain and tiredness. From personal experience, it can quickly turn into a serious, permanent problem. If you feel tiredness in your hands, they should be rested immediately. Disabling injury can creep up without much warning.

This is actually very interesting because according to this it can be assumed that this is a general cycle and it very much describes the symptoms.

Maybe there is a benefit to sending signals on an empty depot that causes a greater base release on full recovery or that the forced reduction of brain waves for a period causes adaptations such as a neuroplasticity enhancement in the brain area.

I have previously before tested ’ falling asleep with the symptoms because it was extremely easy’. When I woke up I did not have the usual benefits.

Maybe you force the brain to use areas that usually are not involved in the activity in order to substitute the exhausted parts. (Like people learning to speak again after a stroke.) So after recovery there’s a larger network you can utilize for the task. But that’s mere speculation.

That is an interesting speculation, since some cases of fatigue will then cause you to divert attention periodically at anything else and it is certainly true that a larger network is utilized for the task.

Putting some summation to it, prolonged tetanic stimulation caused synaptic vesicles to become depleted (either partially or largely) at the active zone. At around a 2 hour mark of prolonged voluntary tetanic stimulation, synaptic vesicles were no longer depleted and potentiation had settled in, as in the handwriting case resulting in neater and quicker handwriting which would require LTP of some sort.

There is no guarantee that LTP settled in fully, right after the synaptic vesicles were no longer depleted, rather than over time though.

This leads to the conclusion that either a process has occurred or the natural result produced this process.

A main thing that does occur is the ‘binding of diacylglycerol to Munc13 during prolonged repetitive stimulation which helps maintain a high rate of transmitter release even in the face of depression by accelerating the rate of synaptic vesicle recycling.’ Which I am highly certain has occurred.

There are definitely far too many speculations to say for sure what is implied by the actions but perhaps the high variation activated the gene expressions that cause altered Ca2+
homeostasis and in turn LTP(or by some other method), again a speculation, since humans are not really subjective to tetanic stimulation based testing there may even be unknown processes.

It is good to note for training alternatives though, after all being able to write with both hands in 2 hours is not really a small feat and it was rather a first time to notice an exponential change of sorts. Translating this to other things will be interesting, especially with the awareness that the tiredness from any depression fades and that intensity is important if not crucial.

Note-Corrected the Credit and the facts in the post after revising the video.

This may be similar to a new method discovered by a student in which intense exercise is done which causes a person to sweat and then that person rests and and studies and at that time the memory of that person is near photographic for 15-20 minutes.

Incorrect- it causes the brain to refresh or remove almost all the cognitive maps(mind maps) of the brain(There are many cognitive maps in the brain for spatial navigation and for many other things also),

And this method increased his test performace,

Credit to Ashish Arora Sir for sharing this method on YouTube,

This is the video of the technique- 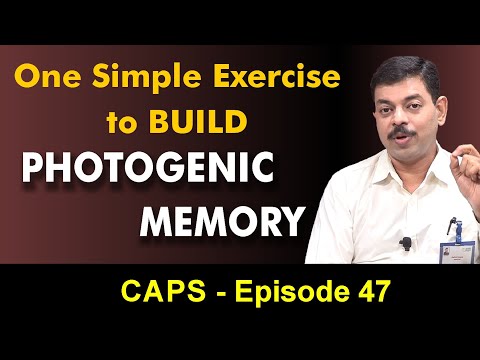 Similiar thing happend to me but in case of reading. I was struggling to Learn to read (not by syllable). I was training every day for long time but no progress seem to be seen, until 1 day during training it clicked and stayed.

NOOOOOOO I am genuinely laughing, this is the last face I expected to see on this forum. All of r/JEENEETards is full of memes of him, probably even at this moment. He often tells children to do random things that are supposed to boost brain power and get a better rank in the exam they’re preparing for. No evidence given (except purely anecdotal records), no research or studies cited. Take his words with a grain of salt.

While I admit that it does make sense that training your non-dominant hand would bring unutilised parts of your brain into use, “photogenic memory” is pushing it too, too far.