Words into objects or persons

Im facing problem during converting words into objects, persons, mnemonics etc
Im not getting link regarding this concept

Could you post a specific example of where you’re stuck?

Is Yugoslavia in a context, or is it just a random word on its own?

It would be easier if you choose the specific examples, otherwise the ones we come up with might not be relevant to you.

You might also want to look at the #examples posts.

Where is examples?
I want bunch of examples

How to break spain, madrid ,Manzanares etc words into images

If you look at my first example above, there are five ideas listed. You can go down the list with each word. Here is the list:

Ok but how can one imagine and visualize pain, strain, span and spin in context of spain?

Since you’re asking for context, it sounds like you want to do more than just remember the word.

I use “sprain” for Spain in my memory palace of all of the world’s countries. All I need is an image that calls up the word in the correct location. So I picture a young woman using crutches to walk up an incline in my former university. She’s “Spained” her ankle. And because I’m also marking each fifth item with a general population figure, I notice that her sprained ankle has a “rash” (46) on it, telling me that Spain’s population is around 46 million.

I’m not sure you’ll actually need more context than that. Because once you recall the word “Spain,” I think that will naturally lead you to whatever additional information you’re trying to memorize about the country.

how can one imagine and visualize pain, strain, span and spin in context of spain?

You can make a story — traveling to Spain and spraining your ankle when you get off the plane.

Just an idea done quickly. Shadow because I didn’t bother to cut it out of my notebook for scanning. 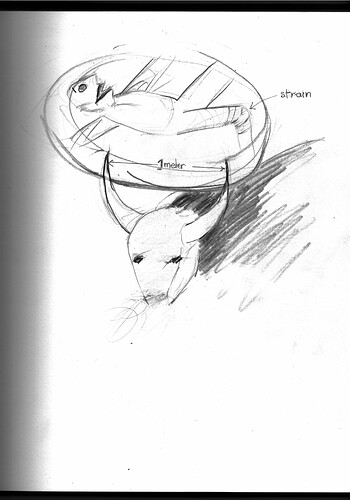