Will I get confused?

Hi everyone,
Just a quick question that I hope some of you ‘out there’ have already worked through:

I am going to be learning 100s of verses from the Bible.

Here is my plan (including the question):
A memory palace for each book of the Bible with enough rooms (one for each chapter) and using the Dominic system to get the verse number. Finally the person will be doing an action that relates to the verse.

Matthew 5:16 reads: ‘Let your light shine before others, so that they may see you good works & give glory to your Father in heaven.’

John 3:16 reads: ‘For God so loved the world that he gave his only son, that whosoever believes in him shall not perish, but have eternal life.’

So I have Arnold Schwarzenegger holding a globe with a heart on top.

So far so good?
But here’s my concern. Somewhere down the line, perhaps when I have many 100s of verses in various palaces, what is to stop my brain from mixing these two so that:

So in essence, the error is that the TEXT (verse) has moved to the wrong place - everything else has stayed the same.

Do I need a way of associating the verse directly with the room (and not just Arnold Schwarzenegger in this case) to stop this possibility from happening or perhaps replace the Dominic system with the Peg system and have an action that links the verse to the room in some way or is it just simply a case of this just won’t be an issue and won’t happen?

Thank loads for the replies and advice.

Hi Dev4,
Thank you for the message.

I could well have a couple of dozen verse 16s to learn by the time I’m done (there are 1189 verses in the Bible). Should I try to find / use a different character for each one?

All the similarities of actions in the images, repetition of number peg images and every other hurdle should and can be solved by the act of placing the images in distinct locations. So, no, you shouldn’t have confusion if you’re not using the same places, if it arise it simply means you’re not reviewing enough.

If for instance you’re wanting to memorize all verses of chapters of all books, then have various possible divisions for the sake of mnemonics and number lists and reduction of loci. I think of two:

Hi Boris,
Thank you for the reply.

I have attached the first two pages (currently 15 pages in total and this is just for the New testament). So no, not all verses, just verses that I think are important / jumped out / are well known etc. 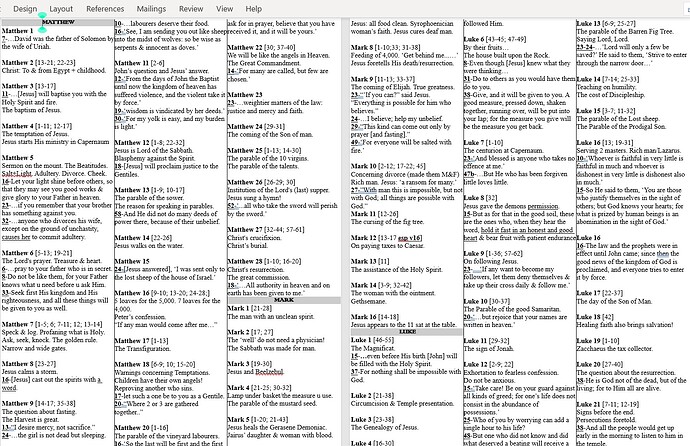 What are your thoughts?

Organize your target data to be memorized (almost done), select and order the loci, as you’re not going to memorize whole books then you better use number pegs for the verse number.

You can even begin by creating a theme base image with this annotations you have and this to become the first image, or triggering image, this mnemonic image must then be attached to the text mnemonic images.

Hi Boris,
Thank you for the reply. So, just to be clear, you are saying that it would be better to use the Peg System as opposed to the Dominic System for the verse numbers.

Thank you for the reply. So, just to be clear, you are saying that it would be better to use the Peg System as opposed to the Dominic System for the verse numbers.

Hello Steve,
It’s fine if you use a Major System like system or a Dominic System like system. My recommendation is that once you have your lists, either objects, people and actions or mixture, you make sure you recall each image. If you’re not going to compete there is no much use in a simple knowledge acquisition basis.