What is your ADDITION technique you use daily at training?

Example of this spark addition method based on Vedic Maths: https://www.youtube.com/watch?v=w9TqFArdhIU

This one is based on their respective books and it is like this:

This one is what I use.

If you know another one, please feel free to add

Yours it is like the one used by Coto and Bouman.

I tried to solve maths calculation in this website, someone made a topic of this website in art of memory forum.
So I joined.

I see, you made a addition topic so I clicked the picture of 1 of the addition question , can you tell me your way how you do this -
And how much time it takes you to do this - 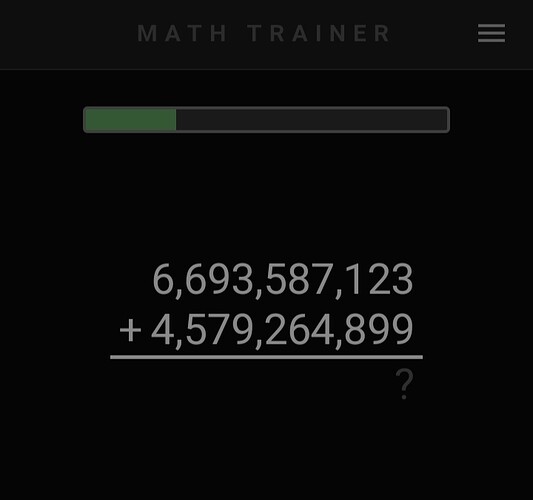 This one is based on their respective books and it is like this:

Isn’t this the way you are taught at school? I don’t think this is their technique but just the general way of calculating.

For me it depends on the numbers (whether there’s a carry) and whether they are shown to me. Using 100s complements is good but especially useful in subtraction—e.g.

Another method not listed above that I find intuitive when adding left-to-right is:

From the book of Willem Bouman MENTAL CALCULATION, AN ART, APART.

Actually the numbers are too biggers for me to do it mentally.

It took me under 10 sec to do this, do you think , it’s a good for me.(I am considering me as beginner)

So my previous number changed into 28 lakh.

There are a carry in the next block so I considered 52 thousand.

That’s it, I think it took me long time to do.
But explaining is even hard.
I am not too good in addition and subtraction problems.
So I like to learn new methods.

Maybe you could also try flash anzan or addition on memoriad.com. It’a pretty difficult to quantify by descriptions

Maybe you could also try flash anzan or addition on memoriad.com . It’a pretty difficult to quantify by descriptions…

I have one question, is this working on phone too??

I tried memocamp too, but that’s not working in phone very well. (Always screen starts moving)
So I left memocamp.

I never found Memoriad for phones. Its indeed a very nice project to do!

Actually no… But on IOS devices there’s an alternative app called ‘ninimath’, it’s nice,though I seldom play games on phones.

Isn’t this the way you are taught at school?

In general, schools teach from right-to-left because it makes it easier to explain the carry… so instead of

I was taught both ways but I prefer left to right.

That way you can say the answer immediately.

For me it depends on the numbers (whether there’s a carry) and whether they are shown to me.

Same, even how they are shown matters to me…

367+29 which with the 9 at the end, I just see at 366+30 instead; however, that doesn’t happen consciously, so I’m not gonna call it “slide over”-method or anything like that. I think it’s more obvious what that feels like to me when you look at the next example he shows:

…is this the method I’d use for a 10x10 addition task? No. The problem here is with how the numbers are shows, which is… all at once. I mean I’m sorry but the guy can try and speak and write like he’s on coke, but no way that he’s gonna write a 3-digit + 2-digit problem faster than I can calculate it.

On the other hand, following along his 3x3 afterwards, I am actually calculating left to right as he writes down the second number and have the answer by the time he’s done putting the equal sign. Small exception at 19:57 in the video where the problem was:

Here I caught myself with just a -11 in my head when he put the plus sign… don’t ask me to explain it, but adding or subtracting 1 happens automatically in my head, so as he’s writing 6, I see a 5 and the same for the 4 which is just a 3. So to me the problem was simply adding 8 to 853. I say 8 instead of 800 because that’s just moving decimal points, but it’s the 8 from 800-11=789… ultimately, what I’ve really calculated was:

Even though that’s not quite correct because he wrote the numbers down sequentially, so I never subtracted 11 but only 1 twice as he wrote it down, knowing all along that I was going to add 8 to his number once he’s done writing it.

Anyways, this is when watching the video. I mean the amount of time you have there is endless. Give me the same numbers on paper written from left to right and I’d fall into a pattern more quickly. Give them to me written on top rather than next to each other and I’d probably calculate in the same way he does for most of them unless there’s and obvious 0 or something like that.

The question is what you wanna use this training for… I don’t train daily (i.e., the subject of your post) instead I train for a couple of weeks before a competition. Also, I find these 10x10 problems boring and mechanical and much prefer the second half of the Mental Calculation World Cup with the “surprise tasks” because for those you need an understanding of math rather than endless drilling of a particular calculation method.

If you know another one, please feel free to add

Lol, by the way… I forget my original point because I was watching the video on the side while writing this reply, so I’ll just answer this instead… I don’t know what to call it… refactoring the problem I guess… lemme rewrite your above example of…

…the idea is basically to solve an easier problem.