I was wondering if I could use the support material as some sort of memory peg. Is there a system for this?

Let’s say I want to remember the following case summary:
“The Supreme Court of Norway found unanimously for broad protection against exposure of journalistic sources even in the context of a government anti-terror investigation. Norwegian filmmaker Ulrik Imtiaz Rolfsen was making a documentary on Islamist extremism which featured a Norwegian citizen who was under the surveillance by the Police Security Service of Norway (PST) and was later arrested and charged for attempting to join ISIS in Syria. PST subsequently searched and seized Rolfsen’s film concerning the terror suspect. The first instance and appeals court upheld the petition to maintain the seizure of the recording on the ground that the specific circumstances of the case, particularly the public interest in national security, created an exception from the protection of sources. The Supreme Court of Norway, however, set aside the seizure order. It found that the content of the film recording did not amount to an exception under Section 125 of the Criminal Procedure because it was not of “vital significance” to the ongoing investigation against the terror suspect. Additionally, the Court assessed the interest in protection of sources against the interest of public in prevention of serious crimes in accordance with Article 10 of the European Convention on Human Rights. It found that Rolfsen’s documentary was “at the heart of investigative journalism,” and that effective protection of his sources was vital in creating the film. On the other hand, the Court found that PST had other investigative methods at its disposal and it was not clear how necessary the recording was for the anti-terror investigation.”

As a memory aid I want to use the following legal act in English (underlined and highlighted):

The legal act is not related to the case in any way, so I need to develop a memory system.

Would it help to put a kind of index of the material into a memory journey? That way you could jump to the relevant section based on the question.

Thanks for your reply, Josh. Would you mind providing a short example using the case summary and the support material I have provided? Or perhaps point me towards some relevant articles?

As I said, I am allowed to underline and highlight words in the support material (with different colours). I am also allowed to make notes of this kind i the margin: “Rt. 1974 s. 1211”. The letters cannot be changed, but the digits can be used as a peg. The first four digits is a year between 1950 and 2017 and the four last digits is a page number between 0-2000.

Here is a picture of allowed underlining/highlighting: 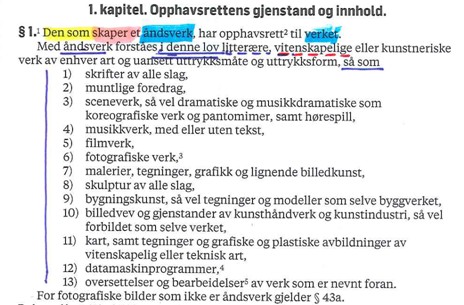