TED Talk About a Novel Way to Learn to Read Chinese

I found this very interesting (and funny) TED Talk about a novel way to learn to read Chinese.

Has anyone else seen this? Can some of these principles be applied to other languages?

This is the official Youtube channel of Polyglot Gathering, the annual world's biggest informal event for language lovers and enthusiasts! Join us at Polyglo...

Sorry to be the negative one in the discussion, but this method is literally hundreds of years old.

The equivalent for English, for example, would be to break words up into their roots (morphemes) and learn the meaning of each root. Definitely useful for deeper understanding.

I’m currently learning Vietnamese, where each syllable carries a special meaning, although not written with ideographs.

…this method is literally hundreds of years old.

Fair enough. It was novel to me, so I thought I’d share it. You do realize just how old the loci method is by comparison, right? Okay, I’m done being snarky.

Since the method for teaching Chinese has been around for a while, is it “the standard approach” to teaching the material; or, is some other method now the favored approach?

Random but related question: what do “misspellings” look like in an ideographic writing system? I’m suddenly very curious what dyslexia looks like in such a context.

Random but related question: what do “misspellings” look like in an ideographic writing system? I’m suddenly very curious what dyslexia looks like in such a context.

not the same character in both cases…

but this method is literally hundreds of years old.

Fair enough. It was novel to me, so I thought I’d share it. You do realize just how old the loci method is by comparison, right? Okay, I’m done being snarky.

@8bit are you suggesting the method of loci is older? Why do you think that?

Sorry for not being clear. This forum is a perfect place to bring this up. I just think the TED talk should have acknowledged: what I’m about to tell is nothing new and pretty widely known.

I would say this is the “standard” approach unless you have a particularly clueless textbook or teacher. Actually, I’m a hard-core advocate in that I never learn a character without learning each of the component parts–even though the component parts may be rare or exotic as individual characters.

The widespread use of word processors has made misspellings less common most of the time, except when people write by hand–and then they are more common. You can write the wrong component, or put in an extra stroke, or leave one out. In more subtle cases the stroke may bend the wrong way or whatever.

I have heard the dyslexia is less common among Chinese.

There’s a nice legend about Simonides of Ceos and the origin of the loci method. Actually, both methods are very old and it’s not clear which is older.

I don’t know if the loci method is older than this kanji learning method. I’m just saying that the loci method probably dates to 500 BCE. It’s often attributed to Simonides of Ceos who lived about that time. Is it older, who knows?

Sorry to be the negative one in the discussion, but this method is literally hundreds of years old.

In fact, that is the way the hanzi were created, so this novel method is as old as each hanzi is.

According to the universal source of wisdom, the oldest characters are “dated by different scholars at 1250 BC or 1200 BC.”

The equivalent for English, for example, would be to break words up into their roots (morphemes) and learn the meaning of each root. Definitely useful for deeper understanding.

Well, yes and no… take pandemic for example… 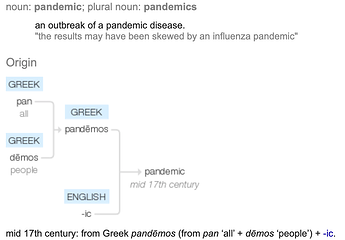 …and compare it to pandemonium…

You are absolute right, that it is useful to know that “pan” will mean “all” in a lot of cases… obviously not the case for panda. You wouldn’t at first think that pantomime would fall into the above category, but it does mean “imitator of all”.

However, if you simply

learn the meaning of each root

you’re not exactly doing the same thing. Look at her last example… double-mountain mouth means “Exit”. You’ll find it on signs in stores and other buildings as well as on highways. Now, “all” is more on the abstract rather then the concrete side… but do you use a “frying pan” in your head as a mnemonic?

Because that would be closer to Chinese once you get past the beginner’s vocabulary where all still looks like “Oh hey, it’s like Egyptian hieroglyphs… I just need to read it like an ancient comic strip”. Now, if that’s all she wants to cover fair enough. It’s a TED Talk and you don’t have all the time in the world.

Later on though, you’ll get into characters where you just have a radical there to tell you what the character should sound like and it doesn’t have much to do with the word/concept itself. So that’s different from putting all the parts together in English as in the above examples.

In Hebrew you have ab/av meaning “father”… it’s the letters “אב” individually referring to the concept of strength and house (they didn’t have houses, but to keep it simple), so together you have “strength of the house” to mean “father”. That is very different from the abstract concept of the greek/latin “pater” that is the basis for the English “father”. Similar to Chinese woman+child=good.

A transliteration of the Aramaic term abba also appears three times in the Greek New Testament of The Bible. Each time the term appears in transliteration it is followed immediately by the translation ho pater in Greek, which literally means “the father.”

Not going into detail here, but Aleph - Tav turns into Alpha - Omega in Greek but then doesn’t exactly make the jump to A - Z in English. Another Germanic language, in fact German, still uses the expression “das A und O” as an idiom meaning the “essence” or the “main thing”… as in “quality is the A and O in our business”.

Nobody questions it, even though aleph/tav and alpha/omega are both first and last in their respective alphabets and omega does not match tav… other than the position in the alphabet of course, but that is really what it’s supposed to convey… the first end the last, the beginning and the end.

By the way, the diagrams from above is something you can get from Google by searching for example “pons etymology” or any other term and simply adding “etymology” to the search.