Suggestions on developing this memory palace system for Mandarin?

I figured out that Chinese syllables can be broken down into 4 segments:

For medials, there are 4 of them if a silent one is counted. They can appear independently as initials, in the between of initial and final, and as a final vowel.

There is also ‘o’ final, which is used only for ‘lo’ and hard ‘i’ final, so I am going to count them both as a silent final which is used also for medial finals.

If all initials, medials and finals are empty, it is going to be a er sound.

There are also 5 tones, but there is nothing to talk about them.

So all information I have to remember:

I generally got the idea from The Hanzi Movie method, but I wanted to create my own system. Hence I think the image of the initials in my memory palace can be based on the people or characters. The final consonant can be based on locations and the tones on the position in these locations. If there is an empty final vowel, it has got a special room. Whether is it ‘a’ or ‘e’ and type 1 or 2 (of the initial) can be determined by weather. It can be either sunny/windy (a1/e1) or rainy/snowy (a2/e2). The thing I don’t know is how should I manage medials. I thought about adding color to the image. For example red for i, blue for u, green for yu and normal for -. But this does not feel like a good idea for me, is there a better way put that info into a palace?

Since this system has to be for remembering character pronunciation, a person from the image needs to have got an item or items that can represent the radicals and the meaning. This isn’t that hard to do. The problem is connecting two or more characters to create a sentence. Is creating a long corridor with photos from palaces placed next to each other a good idea?

Ex-A for Apple, E for Elephant,U for Umbrella as in the English Alphabet and if you do this then make the image good for usage,

You can use the Keyword method for the first part,

And you can use the Chunked link method for the other objects,

And I also think that using The Keyword Method with the pictures in a hallway is a good idea,

Can you explain your idea, And what is the Hanzi method?.

I can create memory techniques on the fly and if you want then I can through private messages teach you how to do the same how ever most of the techniques that I create only increase short term memory by upto 75% and it is likely that in the beginning the same thing will also happen with you,

The price that I Pay for speed(Not many memory methods that I can post in this forum however still more that almost all memory techniques in this Art of Memory Forum combined are posted by me however it was very hard and this took me 2.5 years to have this abality and if I can do this then so can anyone(and so can you) you can PM me if you are interested and I am thinking of teaching others how to create memory techniques on the fly by a private message in order to cure my loonliness especially in the lockdown and do you think that this will be a good idea? ,

If you want I can create a memory technique based on your description minutes after reading your post it will give you some examples also,

However you can decide this. 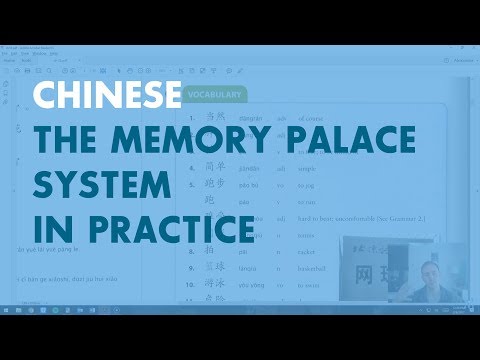 I would like to ask what is this system for? Words? could be very good in mandarín words. numbers? it is very hard to record the images, as you have to form the sound by part to get certain images. If it’s for Chinese characters, I doubt it is not very useful. For sounds, it should be pretty cool.
As long as you have a solid plan, it might be all good.

Mostly for remembering the pronunciation and the meaning of individual Chinese characters. Since it is based on the pronunciation first, the images from memory palace technically could be not associated with any character nor meaning. But this is not the case, so either character composition, meaning or both should be included in a room. It is not a primary use to remember whole Mandarin words, because one character words are rare, but this system can be still helpful to understand and associate full words better. Chinese words are generally made from smaller words. For example there is a word “zhanlanhui”. I know it means an exhibition, but this is only a partial knowledge and it is not really useful. I don’t know how to write it nor how to pronounce tones correctly.
If I knew that: 展 (zhǎn)-(to exhibit) 览 (lǎn)-(to view) 会 (huì)-(a meeting)
then I could write it, pronounce it with correct tones, and understand better how this word is formed.

what is the Hanzi method?
It is basically a method of associating single Chinese characters with their pronunciation, this is the thing I am aiming to do. It has got 4 categories of people (that represent initial consonants+medials) then links them to a location in a palace (that represent vowels+final consonants and tones) and then puts actions and objects into a palace (to represent character composition+meaning). While this seems to be a good method, I find a problem with it, this method requires to use many people in many locations. I am looking for an alternative way to store information to avoid using over 40 people.

In short I want to remember:

I am thinking of teaching others how to create memory techniques on the fly by a private message in order to cure my loneliness especially in the lockdown and do you think that this will be a good idea?

For me, it seems like a good idea, but making it available to the public feels like a better option. I am thinking about posting a general guide about something. Then there should be an option for people to ask questions and get answers. But if there is somebody that really needs tutoring by PMs and confirms that, you should go and help that person. For now, I have no idea if I really need that. I personally prefer to discover by myself what works and what does not and asking questions when needed.