I have reached a certain point in ML words where my progress seems to have stopped. On average I manage to memorize about 30 words, having had enough time to read all 50. I am using the method of loci, storing two words in each locus.
The first problem is that since I memorize words in pairs, it happens very often that I inverse the order during the recall. I know I could deal with this if I had more time by placing two images, say, vertically, but, given the time constraint, I usually come up with an image with two words blended in some memorable way which doesn’t take the order into account.
The second problem, is that I very often mess up grammatically different words which have the same root. For instance negotiate-negotiation-negotiated – I would have the same image for each of the words in this group, and then rely on intuition to guess which one is the correct.
And statistically, due to the errors associated with these problems, I get only 30 words correctly, even when I manage to fill in all the blanks.
If anyone else ran into the same problems, I would greatly appreciate if you share how you dealt with them.

P.S.
I tried dealing with this by trying to train my intuition – during the training session I take a screenshot of my failure (I have attached an example), and after I memorize the same words again, until I achieve a perfect result, analyzing the mistakes I made and figuring out how to avoid them. So far I did not find a general solution however, and I don’t feel like I’m moving in the right direction, which is why I would be very grateful for any suggestions. 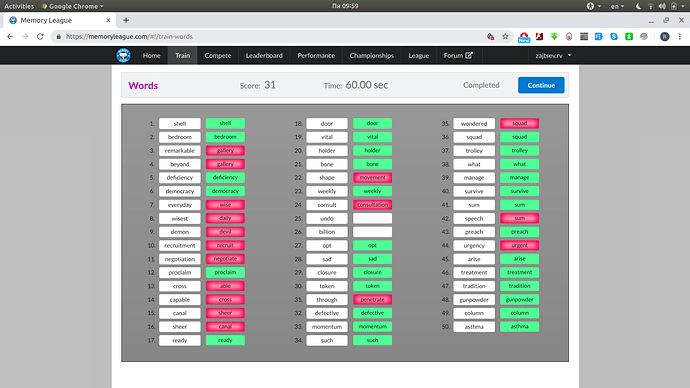