Shakuntala Devi, the faster and best human calculator ever? 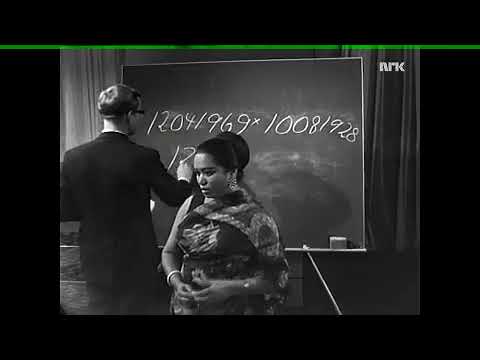 However none of them are able to multiply in a glance like Miss Devi did.

I think currently we have normal people getting fast in doing multiplications and other mental calculation tasks. Don’t get me wrong, they are very skilled.

Mr.Lee and some other Memoriad participants are great, but there are plenty of Soroban masters(maybe 100+) are faster (who could finish 15 sets of 3 digits anzan addition in 2 sec, which means around 22.5 digits processed per second, and some of them are even close to 30. )

Some of the top Soroban masters could finish 8x8 in 8 sec within the digits written down, but to my observation, they still can’t finish 13x13 in 28 sec by spoken like Miss Devi did,(though the digit processed per second is smaller), just because it’s too large and by spoken is slower than by writing down.

India has many great calculators, but the ability of Mr Devi seems so supernatural. Anyway, I’m just an ordinary person, maybe some professional’s insight are needed.

I think your explanation is very fair.

Shakuntala Devi was a calculation prodigy. Something interesting about her was that her IQ was pretty average except her arithmetic skills of course. Even her digit span was not exceptional.

She did know calculation methods, she described some in her book.

My theory is that her brain had a niche for the way she calculated and that this was not memory related. Perhaps she was a cross-method prodigy? Who knows.

To me, she falls in the same category as Rudiger Gamm. Both have shown incredible feats of calculation but I am not sure how far their calculation skills extend to other areas. Rudiger for example, was not as good in multiplication as he was in 2 digit power calculation.

Both are also a mix of some natural ability and techniques.

Scott flansburg might also fall into the same category.

Nonetheless, I still appreciate Devi’s feats. She was clearly in a category of her own.

Look at the scores of Mr Flansburg: he finish last in almost every task.

There is no ‘fastest’ and best’ mental calculator ever, because there are many different categories. She only displayed one category here. Multiplication.

There have lived more than 100+ billion humans in history. Can you benchmark them all for mental speed? - No. So, I would personally refrain from using fancy words such as ‘fastest ever’ or ‘best ever’.

Ok, I know that Devi had calculated correctly a 13 x 13 (with the second number having a 0 in the end.)

And I am 100% sure that this 20x20 operation was randomly generated.

But with these TV shows and documentaries, I am not really sure about the neutrality of the chosen question. (Same with the high 13th root of Alexis Lemaire.)

And Granth is not even the best in the world in multiplication. He is just the 4th best ever.
Mental Calculation World Ranking Lists
And since Johnny mentioned Gamm, you can see his results in the link above. It’s all benchmarked.
If you don’t see him on the ranking tables for addition, roots or multiplication, this means he did not finish 10 tasks correctly on time, in any of the competitions that he took part (i think the first 3 World Cups and 1 international Memoriad ('08) .

In my opinion both Marc Sanz and Mrs. Lee (and probably Freddy as well) could easily break Devi’s record of 28 seconds for a 13 x 13 if they wanted. In fact, in the next World Cup, I will ask them to do so, and hopefully record it on video.
The Memoriad software currently allows multiplication generators of 3x3 up to 10x10 and only 20x20 as a special mod, so hopefully there will be a modification to add 13 x 13 as well. If not, I will generate 1 task from online number generators and ask them to calculate the product on the drawing board or write down the product result on paper

Granth has quit competing in the last 7 years, so I am not sure if he still practices.

Also, besides calculation, many other activities which Mrs. Devi did , seem to me of very low intelligence (astrology , tarot etc.) .

Finally, the biopic movie that Bollywood did for Devi, was very mediocre and unnecessarily fixated on drama/romance.
I liked much better the Indian biopic movie about Ramanujan (’ The Man Who Knew Infinity ’ )

I always felt that Devi probably had some personal techniques that she never shared. IIRC, I remember learning about two years ago that she never really went into great detail about the type of techniques she used. I guess that makes sense though, showmen never tell others their secrets.

If they can tell you orally the result of a such multiplication from left to right as Mrs Devi did, then of course I will refrain myself of my “fancy” behavior.

@benjamin1990
Μrs. Lee also does the operations from left to right as well.
And if she recites it in Korean, she will probably be faster.

Also, it doesn’t matter which technique does one use.
Only the fastest time matters.

There is no really a secret.

She also used criss-cross method from left to right.

Her techique comes from ancient Vedic Math, which were also improvised by Mr. Jacob Trachtenberg, a Jew prisoner in a Nazi concentration camp during World War 2.

The Trachtenberg system is a system of rapid mental calculation. The system consists of a number of readily memorized operations that allow one to perform arithmetic computations very quickly. It was developed by the Russian Jewish engineer Jakow Trachtenberg in order to keep his mind occupied while being in a Nazi concentration camp. The rest of this article presents some methods devised by Trachtenberg. Some of the algorithms Trachtenberg developed are ones for general multiplication, division...

In mental multiplication, there is no other method except variations of criss-cross. Everyone who says otherwise, is lying. (including people like Tammet who saw ‘shapes’ ,‘synesthesia’ and stuff like that). It’s not really hard to tell the truth. It just takes honesty.