I’ve put this in offtopic because I’m not sure it’s useful for memory or counter-productive but it could be very interesting:
https://research.google.com/semantris/

This game is a bit like Family Fortunes. You see some words and you have to guess the associations with those words.

AFAIK this process is ruining for memory training because there’s a timer and it’s in game format. However, it would have been interesting to observe the associations. For example, it would be interesting to put your memory technology into this game, mix ith other words and record your responses. You might be able to find correlations in speed that you wouldn’t have otherwise found.

I’m not sure it’s useful for memory or counter-productive but it could be very interesting:

Well, it is interesting in a “neurons that fire together, wire together”-kinda way, no doubt. I supposed it could be used in a brain storming kinda way or to raise awareness of your own selection bias… people should post here if they find a way to make could use of it. There seems to be some sort off potential… can’t put my finger on it though at the moment.

If you look at the instructions, for the “arcade” game… the word you type that is most associated gets sorted to the bottom. It’s sort of like a frequency dictionary in this way or what you’d find on the SATs with “a is to b is like c is tod”-questions.

So depending on what the other words are in the list, “Italy” might sort “pasta” down to the bottom, but if other key terms related to Italy are in the list “pizza” might to a better job, the opposite is true when there is a bunch of food items in the list of course.

The AI “knows” the association based on the training it’s received and maybe on the training it continuous to receive as people play it. Not sure about the latter, but then you could create a bias for the AI to think “yellow” and “pee” is more associated with “snow” than is “winter” or “ice” or “white” is.

So naturally after playing a couple of games I tried to see how often “a”, “the”, or “be” would sort a given word to the bottom. Then I got really bored (first encounter with AI programming 20 years ago) and tried “sex”. Well, try for yourself if you’re curious… by the way, here’s why:

AFAIK this process is ruining for memory training because there’s a timer and it’s in game format.

You can try the “blocks game” which doesn’t have a timer. There’s actually two under that link… the first one that you’re talking about which is like Tetris… five right answers clears the board; and the second one (without timer) that is like candy crush. I think depending on what you are trying to do both have they benefits.

I’m not sure it’s useful for memory or counter-productive but it could be very interesting:

Might be both, I think this can be surprisingly useful. It allows you train the speed at which you can make good associations. I think something like this would be extremely good to have in general.

On the other-hand when it said Turtle I typed syrup it said ‘try something else’, when I think about a turtle I get this turtle : 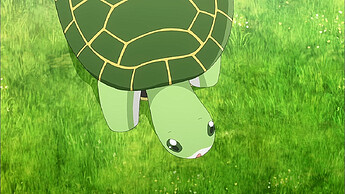 image1280×720 294 KB
This turtle is called syrup, which would have ordinarily been a good association but as it is not a normal one it can’t be helped.

This is the only negative aspect I can find to it, which for most people may not be an issue.

there’s a timer and it’s in game format.

I think that is actually more beneficial for making quick associations. These associations from trying it, seem to be based on being more descriptive of the thing you want to describe than other words currently present. Typing fluency may be required. I played around 3 repetitions and I have definitely gotten better at it, the cross association when more words are included will likely also be extremely helpful.

I can imagine that after training on this, you would find associations come to you much more easily, perhaps abstract associations that most people seem to struggle with.

This turtle is called syrup, which would have ordinarily been a good association but as it is not a normal one it can’t be helped.

If that is the case and you can still train it… just teach it that:

This turtle is called syrup

…after a while that’ll be a good association for the AI too. The game basically wants you to “guess” what the AI thinks the association is.

Typing fluency may be required.

I can imagine that after training on this, you would find associations come to you much more easily, perhaps abstract associations that most people seem to struggle with.

Depends on if your playing for fun or playing to win… if you want to win, you know the AI’s shortcoming and worry about that. It’s like they say in poker… you don’t play the hand, you play the person. That aside, nobody goes for a KO in a sparring session, so if you know why you are doing it… you can use it to train what you are describing of course.