On the usefulness of Duolingo

Is anybody else using Duolingo? What do you guys think? I’ve spent a little over half a year with this educational candy crush now. Got some 120,000+ XP if that means anything to anyone.

I started with a triangle of French, German, and English but then dropped the German from French in favor of German from English. The biggest issue I see with Duolingo is the inconsistency. Some language pairs have 10 different levels and others have only 4 or 5 levels. 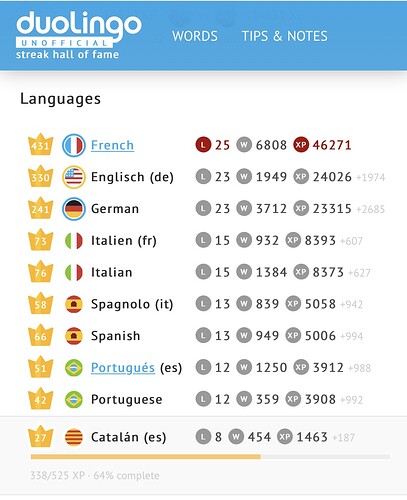 The other problem is that they only show “Tips” for the lesson in the LangX from English courses. In “Tips” they basically explain how to use the plural or personal pronouns, etc.; however, if you are doing Portuguese from Spanish you have to figure things out for yourself.

After I had reached Legendary Level in English from German about a month into it, I started adding other Romance languages. On the Duolingo forum they call DE-EN a reverse tree when you also learn EN-DE at the same time. Like I said, I wanted to do a triangle EN-FR, FR-DE, DE-EN originally, but the FR-DE was ridiculously short.

I think the two most complete courses on Duolingo are French and Spanish (both from English). It seems those might actually get you up to a B1 level as far as grammar and vocabulary. For the rest of the courses A2 would be a stretch. 30,000 XP is when you get to Level 25 and for English from German it’s not even possible for me because there is nothing more to do in that course.

Ultimately, it’s not worth the time you spend on it when compared to watching Netflix, etc. Of course if your goal is to get really good at translating things, rather than speaking a language, then Duolingo is the right app for you. For me it’ll remain an educational candy crush, a little something to do while waiting in line, etc. just to kill 5 minutes.

What do you guys think?

@bjoern.gumboldt, I was a Duolingo addict. I craved the next level and gots lots of loot. But in the end my life was empty.

I learned a lot about the eating habits of insects and animals and what they read. Mostly I used Portuguese from English but dabbled in Czech, Hebrew, Russian, Greek, French, Italian, and Spanish. The gamification and graphics of the system is excellent but it distorts the goals of the student to use the system for speaking the language. I thought the best part was the dialogs and am convinced that learning meaningful phrases based around common verbs should be the first step in language acquisition. I gave up several weeks ago at about 8,000 XP so I understand and respect what a hard-core language learner you are!

Duolingo uses Google’s speech engine to pronouce the words and I can go use the Translate site myself if I want to hear the phrase or variations on the phrase I’m interested in. I think I was translating OK and learning the words but there’s only so much you can do with a butterfly drinking milk. It’s now a joke with my wife, my in-laws, and her friends in Brazil.