I think we all appreciate the World Tour and the nice tournaments it involves, but one thing I think is still missing, and would be cool to organize, is a Nations’ Cup: something similar to the Davis Cup in tennis where each country would select their best players and then face each other in a new tournament. I already discussed the general idea with other fellow competitors (including Johannes) and everyone enjoyed the general idea. I think we would all love to see games such as Germany vs. Japan or Poland vs. Mongolia.

The tournament could take several formats, which I summarize in the slides below. I don’t know when this could be organized given the calendar is already super tight, but I first wanted to present the project to you to gather your feedbacks:

Any feedback / suggestion much appreciated !

Thanks, and as Johannes says : “keep on memorizing !” 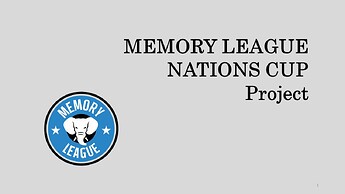 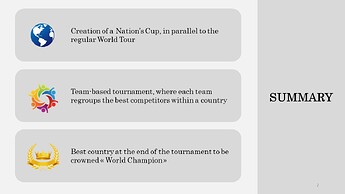 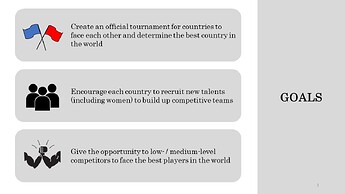 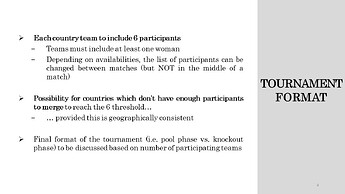 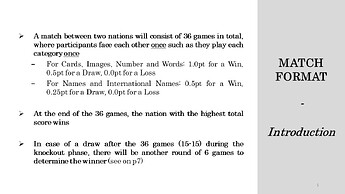 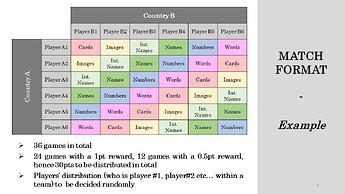 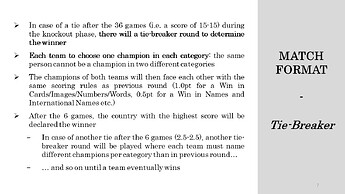 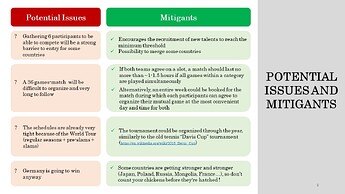 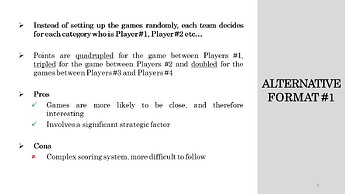 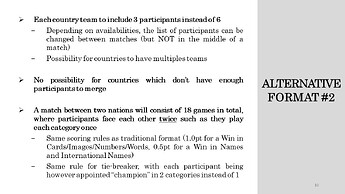 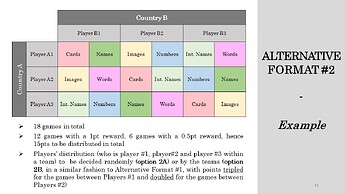 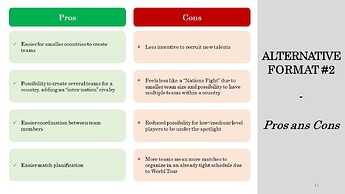 Great job @Rafiki!
I initially liked the option with smaller teams more, but it’s true that if you want to get more people into the sport then the team-of-6 approach is the way to go. Still afraid about trying to get 12 persons to be present at the same time though.

Or would the matches not be played at the same time?

@Sylle I agree it might be challenging to get 12 people at the same time but this will be the case for the Pan American Open so it should be feasible as long as the matches are booked in advance? Alternatively the games could be played over a week with participants arranging their preferred slots with their opponents separately, but that would be significantly less suspenseful I believe !

@Mathmaster there are not that many American competitors ahead of you in the Leaderboard so you should be strong enough I think !

So the selections will be based on the overall leaderboard and country?

I guess a team captain would be appointed for each country willing to participate, and then the captains will be responsible for their team’s selection based on who are the strongest / the most motivated !

I’d be in favour of the possibility that countries, which don’t have enough players, can merge to form a team (admittedly because I probably wouldn’t be able to participate otherwise, since even finding 2 other people from my country would be tough).

I probably wouldn’t be able to participate otherwise, since even finding 2 other people from my country would be tough).

@SilvioB Yes, merging countries will be an option (as highlighted in slide 4). It would be better if there is a geographic consistency though (so in your case, maybe you could try to merge with Italy?)

I believe however that teams’ creation should be at competitors’ initiatives as much as possible. For the remaining players that are willing to participate but could not create a big enough team, we will probably create a team “Rest of the World” or something like that

I came up such format one year ago and actualized it. The first match was Team Russia vs Team Egypt (I have some links to the event)

Also I invited French and USA team, but they didnt organized, they didnt manage to do it from them side unfortunately.
Generally, we got a lot of positive and some expirience. Now russian team plan to compete in the summer.
If anyone team wants to play then write me in Facebook

Thanks for the feedback Alex, I did not know such games had already been organized in the past. Can you share your link to the event / describe the format?

I think it would be cool if we make it more “official”, for instance with a dedicated page on Memory League website (maybe in the Championships section @Simon ?)

Rafiki, get in touch with me in FB: alexander.goryachev.585

The idea is amazing for countries in which memory sports are not well known. I’m from Chile, South-America, and study a high-intensity career which is precisely where I expected to find most interest in memory, but everywhere I’ve asked, I only get funny looks when I mention memory competitions.

Giving the countries which are smaller in the memory scene a reason to get their competitors to team up is a fantastic way to get everyone to push their skills together, and an attractive way to get more people interested.

I’m looking forward to see where this is going!

Hi Francisco, thanks for the feedback ! It is true that there are not many competitors in Chile but there are many in Columbia so you could potentially join with them to create a South American team?

To be clear, this is still an idea / project at the moment and nothing official has been launched yet.

After giving second thoughts and looking at the Egypte-Russia match which happened a year ago (link here for those who are interested, google translate does a marvellous job for those who don’t speak Russian : 🇷🇺Россия - 🇪🇬Египет. Участники и правила... | Ассоциация Мнемоспорта России | VK), I believe a 36-game match is probably a bit long and more difficult to follow / stream.

So here is another suggestion which I believe could work while still achieving the targeted objectives (incentive to recruit, involvement of many competitors, strategic aspect…):

Now, about calendar: the schedule is quite tight until October (especially due to the unfortunate delays) so we could either (i) try to organize this by November / December or (ii) doing it through the year 2022 (similarly to the old Davis Cup format) with 1st round in Q1, quarter finals in Q2, semi finals in Q3 and final in Q4.

Either way, this is quite in a long time (which would leave some time for the teams to get organized) but we could potentially organize exhibition games in the meantime to check if the format works.

So who could be the potential teams? Looking at the leaderboard, I believe we could potentially have:

In terms of organization, can you let me know if your country could be potentially interested to participate? We want the best to participate here so any feedback from German / Japanese competitors in particular would be highly appreciated (no need to create the teams for now)

And again, if you have comments / suggestions on the above format, let me know!

I just want to say that I really like this idea. The tactical aspect of chosing who plays what on which position is nice and could lead to a cool team spirit. I definetely would like to part in such a competition!

Potential disadvantage is that it could be a high effort (finding a time, camera setup etc.) for only 2 or 3 games that one person is playing.

I’d love to represent Canada! We could also combine some countries that maybe have smaller representation as well. I’m not sure anyone else from Canada would compete, as there’s just a handful of us that are actively training right now. But I’m sure we could wrangle a team. Doing a ‘Team North America’ with Canada, USA, and Mexico could be fun too.