Hey !
I’m a 21 year-old guy, recently got very interested in memorization and its implications, first wanted to re-learn a few dozens pi digits and couldn’t stop going since then.

I really enjoy going through my mind palaces, being the spectator of an improbable story I created. I am kind of in a meditative state when I recite them. I feel like finding ways to link the images in a certain way makes my creativity work. Moreover, I feel like it’s a great challenge, and I wanna see how far and how accurate I can go.

I’m gonna tell what I’ve been through in regards to memory stuff. (I’m primarly interested in remembering numbers.)

Several months ago, I wanted to learn digits of pi, but my method was not that great. I had planned to group digits by 3, create a 3-digits number system and create a big story based on that. But as I see it, there were two major flaws.
Firstly, my number system was severly incomplete, and my idea was to add a number to it when I encountered it in the digits of pi, so when I needed it. Secondly, my story had no ground, it was not placed in any physical place, so it was hard to keep track of the story, and to remember it.

Those points made it quite difficult to progress, and I think at one point I knew about 200-300 digits, but I lost motivation and stopped it there.

A few weeks ago, I wanted to try again, and placed the first hundred decimals of pi in my house, 10 digits per location, 10 locations. I only had my incomplete number system, so I used it as much as I could, but I also had to fill the gaps with 1, 2 or 4 digits chunks which made sense to me (1885 is Victor Hugo because he died in 1885, 4 is a cat because it’s spelled similarly in french, etc.) I spent quite a lot of time creating the 10-digits stories, obviously, as I had to find references and make sense of them. But it allowed me to have a very large set of possibilities for the stories, so once it was done, it was very easy to learn and remember. As it worked well with the first 100 digits, I kept going, continuing the story outside in the streets of my town, placing a 10-digit-story on every significant place. Up to 1100 digits.

In the meantime, I learned more about memory methods, the method of loci, number systems, PAO, spaced repetition, the major system, etc. And I thought that it was time to go to a next level. So I decided to finally complete my 3-digits number system (which was ~65% incomplete at the time), and go with 3 images (9 numbers) per location. Loosing one digit, but making the upcoming stories way easier to create. I decided to go with that particular method because I felt like it fits me very well. I don’t really like the idea of “action” of the PAO system, nor the sound-based idea of the major system (translating numbers into sounds, sounds into words, and words into images feels way too much to me, let alone finding 1000 different enough images with proper sounds). Also, I felt like a 2-digits number system (even several of them) would be too repetitive and inefficient in the middle-long run.

Right now, I know about 2300 digits of pi, adding 225 per week, and it’s going very well. I recite them from time to time, and try to get full benefit of spaced repetition. I still don’t know my number system by heart, but I’d say that I know about half of it. (Currently drawing flashcards, it’s painful to create but I feel like it’s the only way to learn it rigorously. Some 3-digits numbers don’t appear in pi before the decimal 16 000 or so. Because yeah, my only way of learning my number system right now is to encounter the number in the digits…)

My second memory palace (a real place, from digit 1099) will get me to 3555 digits, once it’s used up I will go to my third memory palace : The Stadium, a completely imaginary place. I’m currently conceiving it, I’ve thought of 20 different “zones” (tribune stands, reception, football field, roof, etc), with 20 locations in each, so 3600 digits in total. I detailed 3 out of the 20 “zones” in this palace (attributed the 20 exact locations, drew them) and I’m feeling comfortable with it. But if someone has advices about how to create an efficient imaginary memory palace, I’d be glad to hear it, as I couldn’t find much information or advices about it on the internet.

So yeah, that’s where I am today. My goal is to remember 10 000 digits, will be done in about 8 months if I keep the pace of 225 per week. There are strings of 9 digits in the late 9000 that really mean something to me, and I really wanna go that far

I’m also interested in creating a 4-digits number system once I know my 3- very well. Not that I really wanna learn it or use it, but just for the sake of creating it

If I do it one day though, it will be way more organized than my current 3-digits system (in which I went for what the object, as well as the number, feel like : 8 is big, 3 is round, 2 is symmetric, the London’s Eye is big, round and symmetric so te London’s Eye is 832). I would create 100 little number systems of 100 images each, organizing the things as much as I could to make the memorization easier.

Oh, well, I don’t know… I’m not there yet. But as well as with the imaginary palace thing, if someone has advices about a 4-digits number system, I’d gladly take it

So that’s it, kind of an impressive wall of text for a presentation, but I figured it’d be interesting for someone here to know in detail what I’ve been through. Anyways, I wish you a great day

Hi petitgugus,
Thank you for your post. I was interested to read about the virtual stadium you are designing. Have you mapped it out on paper or is it all in your head?
Cheers,
Mark

Hey ! I mapped the 2nd and 3rd zones of it on paper, the first zone is in my head but it’s much simpler to remember and map without paper (it’s an almost linear walk outside the stadium). For each of these 3 zones, I’ve written the 20 precise locations i’m gonna use. I also know the 17 other zones, in order, and tried to make a consistent path through the stadium. I’m gonna detail these zones later, map them and write the precise locations too.
But my drawings on paper are very simple, not accurate compared to what’s in my head, as most of the details are in my head. It’s just a way to organize things, to make sure the rooms don’t have 5 perpendicular walls or things like that (although it wouldn’t cause problems, in fact… an absurd/impossible space as a mental palace would be kinda cool.)
Cheers
gugus

Thank you for your reply petitgugus.
It sounds very interesting. I understand that what is in your head is more detailed than what is on paper. I’d still be keen to see what’s on paper if it’s possible to attach an image or two. If not, no problems. A room with 5 walls is indeed an interesting concept!
Thanks again,
Mark 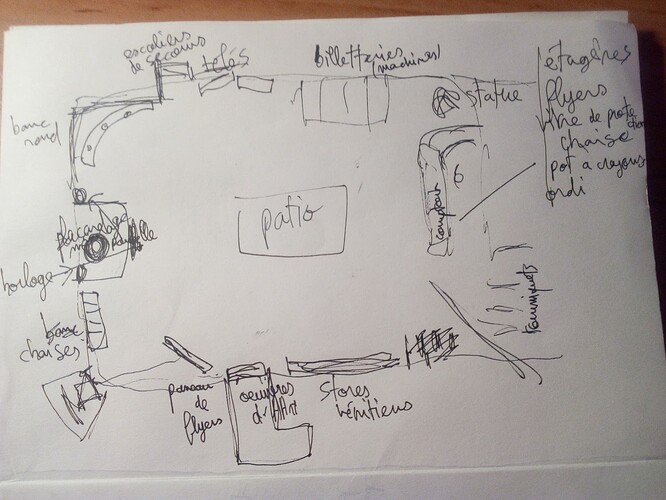 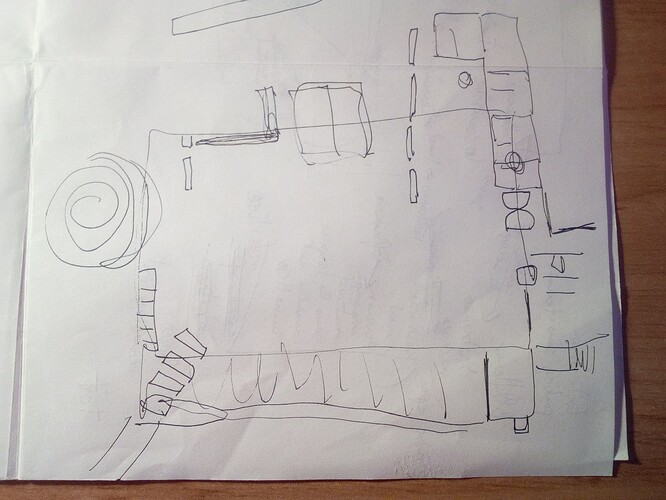 There are the drawings of the 3rd zone (the reception) and the 2nd zone (the underground parking lot). I didn’t write the 20 locations for the parking lot on paper, but it’s written on another document along with the corresponding pi decimals. You can see here the 3 first zones with the decimals : (written in french though, haha) 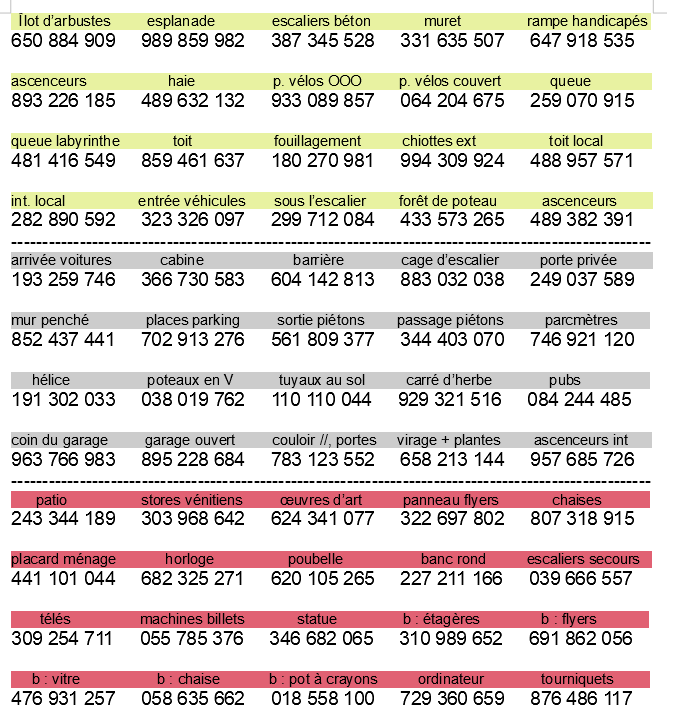 4 is a cat because it’s spelled similarly in french,

When I was a little boy my older brother said he would tell me a story in French. Then he said, “Un, deux, trois, quatre, cinq”

I was completely puzzled, so then he explained that it was the story of three kittens who drowned.

Hi Gugus,
Thank you for uploading the images of your mind map. They are very interesting. I now better understand how you are assigning your loci.
Cheers,
Mark

for the imaginary memory palace – i’ve been experimenting with lots of ways to make it fast.

back to the imaginary memory palace – I didn’t give up on finding some way to make it comparable to a real house. That said, I’ve had more success with the insides of houses than outdoors scenes.

I also use imaginary palaces for happiness. They take time to build, but they’re fantasy palaces that remind me of things that give me happiness and it’s totally worth it. The purpose of making it fantasy is that they’re mostly clear, empty space and the spots just remind me of emotions and meanings that make me feel better.

As for speed, and being practical – I stick straight to memorizing the interiors of real homes & buildings

To be honest, my goal is not to be fast. I just want to memorize digits efficiently, and long-term. Indeed, imaginary palaces take time to create and remember, but the reason why I did it is because I wanted to give myself a challenge and explore the possibilities of my imagination. I don’t mind taking time to achieve this.

I still didn’t place any digit in my imaginary MP, but for now, I feel like it’s quite nicely (although not perfectly) ingrained into my brain, and I’d probably need about an hour in total, looking at my drawings, to know it perfectly. I don’t feel a huge difference between that and a real house, for instance. They are different, sure, but I feel like the fact that I can’t walk in that MP irl is counterbalanced by the fact that I chose each and every detail about it. I studied architecture a few years, so it certainly helps, but still. I’ll see how it all evolves when I begin to actually use this imaginary MP, that’s going to be the real test ^^

Do you actually use your fantasy MP to remember stuff ? I’d like to read more about that. How are the loci linked ? What do they look like, do you have any example ?

thanks for the feedback and thoughts