After the fire I have spent the last few weeks sugar soaping walls whilst listening alternatively to non-stop hits of the 80s radio and Memory Code (only because Memory Craft still isn’t available on audible yUK * shakes fist at @lynnekelly 's publishers *.). Multiple times now I have heard Kenny Loggins proclaiming we should be flexible of foot, Miss Lauper that maidens merely seek amusing diversions and,far more profitably, Lynne Kelly on the memory spaces of the ancient Britons.

I live in the county of Norfolk (that’s like Deliverance County but without the charm) and I was well aware that “We doon’ hev any f 'hem ‘here pagan s’andin’ stoons” (“there are NO megalithic stone monuments in the county of Norfolk”). Just let me repeat that: google up any map of the UK’s standing stones sites and you’ll see that, as in so many other regards , Norfolk is and always was an Island just off the coast of England. Indeed there is a local joke that “Norfolk is an Island , cut off from England on 3 sides by water and by British Rail on the 4th”) We did, apparently, have a ‘Seahenge’ https://www.youtube.com/watch?v=cr7UIgOKwus but I think those nice archaeologists dug it up and transported it to England.

But Dr.Kelly doesn’t just talk about stone circles and henges being memory or performance spaces but barrows and cursuses (cursi?) too…and ditches…ditches is important. So on a whim I decided to google up ‘cursus Norfolk’ and got quite a surprise when this came up.

Why quite a surprise? Well not only is the village less than 6 cigarettes duration (I smoke a cig a mile) in the car from where I sit , not only is it the village where I attended school in the, then, little Church school but also my mother’s family have lived documented in the area since before the Civil War ( i mean the one between Stephen & Mathilde) and yet I had never heard of any Neolithic sites in the area although I was aware that there had been settlement…and, of course, if I had listened to Dr.Kelly a few more times I might have made the mental connection that any Neolithic settlement of any real size would require a Memory Space.

Investigating further I discovered an archaeological report and map of sites in the area that made my jaw drop. 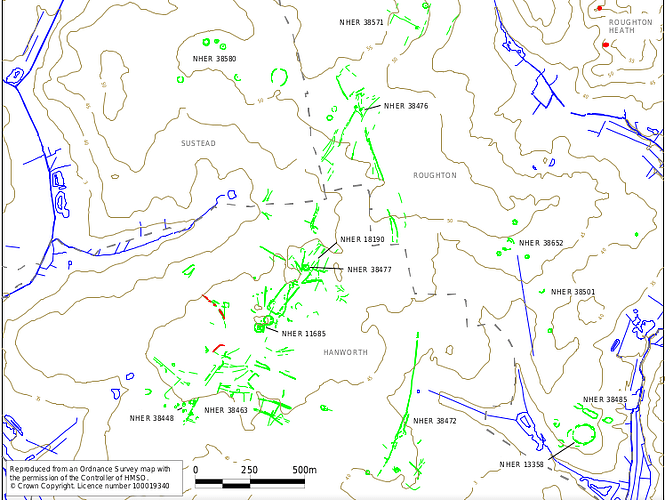 Screenshot_2020-01-12_18-37-15748×562 121 KB
Everything Green on that map is a Neolithic site. There are at least 3 cursuses within 7 cigarettes or so walk of each other ( I smoke about 6 cigarettes a mile when walking). ‘Barrows’ or ‘Performance sites’ abound and other earth works described as ‘oddities’. Although you can’t see it on that map I’m sure, even as a non-archaeologist, I could make a case for calling it a ‘complex’ and I’d be happy to wager some of the ‘modern’ (by Norfolk standards so anytime since the AngloSaxons) minor roads were once maybe even processional ways.

As a good Kelly-fanboi my next thought was ‘I wanna walk these sites and maybe even use bits of them as a Memory Journey’. You have to admit it’d be kinda cool to use an ancient cursus as a memory space, wouldn’t it? Or is that just me being a sad old mnemonist?

Unfortunately , all the sites are no longer visible on the ground and had had to be identified by aerial photography. It seems my, mainly Victorian, forebears got an inordinate amount of pleasure from griping their …ploughes. I blame Enclosures and the Corn Law.

Anyways the point of this post is simply to remind all Kelly fans that the remnants of Neolithic or Oral-itic cultures’ Memory Spaces could be nearer than you think and that hill may be more than you think.

This is the most fantastic message, GibtsDochGarNicht. I have sent your grumbles on to my publisher. I find it all too confusing as different rights exist in different territories. The Kindle has just gone live everywhere, but I don’t know about the audio. I shall ask again. I asked about audio and got a reply about Kindle.

I would simply adore to use a Neolithic circle as a memory palace. Talk about recycling! Unfortunately, we don’t have Neolithic stone circles in Australia. You are near Seahenge and all those Neolithic sites. I am seriously jealous.

‘Complex’ is the word - exactly what they would have been. You mightn’t have any still standing near you, but you are way nearer them than I am - about 10,000 miles nearer. If you do go to a circle, look at the stones closely, and let me know your opinion of how they would work as a memory palace.

If you do go to a circle, look at the stones closely, and let me know your opinion of how they would work as a memory palace.

That reminds me of something I meant to say here just before we were burnt out of our flat before Xmas. I happened to watch a documentary on Neolithic Orkney/Brodgar-can’t recall which one I’m afraid but ‘they’ , the documentary makers, hit on the rather clever idea I thought of asking someone who knows something about Viking legends for their ‘take’ on the Orkadian standing stones. I say ‘a rather clever idea’ because, for those who don’t know. Orkney and other Scottish Islands used to be part of Norway not Scotland, a form of Old Norse was spoken there at least until the C18 and the Vikings and their descendants took much better care of their legends and myths than others have. I don’t recall exactly what was said but it was made very clear that in Norse legend the stones sang or danced and were the embodiment of /contained the ancestors ie were memory spaces! There being, to my mind, no difference between saying "the stones sang" and “songs and dances were encoded in the stones” nor does it make much difference whether one says “the stones contain the spirits of the ancestors” or “the stones encode the knowledge of the ancestors”