Can anyone please help me memorize the stuff in this image…

Firstly, we clarify unnecessary memorable objects. Like I think u won’t forget about the topic since u r gonna memorize “World Thorium Reserves” right? And u also know u r gonna remember the country and reserves in thousand tones. Using common sense, u know the units (thousand tonnes).

Secondly, we clarify what u supposed to remember is the country/ state name and digits.

Now, take the left table as an example. 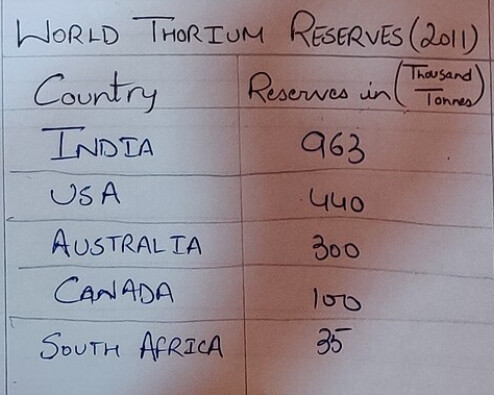 And it should be fine!

Umm… In case, u don’t have your own number system. u can make a simplest version first. 10 objects for 0, 1, 2… 9. Below is an example of 10 objects with shaper and common logic implementation.

Haha, it’s natural, people tend to do shortcuts. I can feel Coronavirus, he did not do wrong, but the practice is the rule in this world.

Alright, might be I should do a concrete example for you

Thank u very much… That was indeed a great help… I do have my number system… !
I just wanted to figure out how do i organise the details to memorise the content… Its been a year since i last used the techniques… So i found it difficult today…!

Sure, i can elaborate it for you.
Body palace is a fixed loci, it starts from hair, eyebrow, eye … … all the way down to butt.

EG
So when you start: you can imagine the blue elephant

first, setting on your hair

.
Then from the ur eyebrows, a sunglasses

is hanging on it

showing a big red point, that’s ur pupil (dice number one is a red point).
After that, from its nose you c the shape of earphone connected between ur nostrils.

… Next locus, repeat the process until ends … 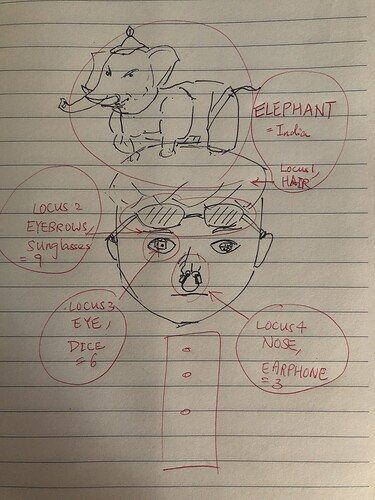 My drawing might be not pleasant to you. You can elaborate how the objects correlated to the loci on your imagination

Thank you, Antelex, that helped, and your drawing is great too.

I can’t draw as good as you, and more importantly the camera on my phone is broken, but I tried with other numbers and got:

For the USA I got the statue of freedom on my head trying to burn my hair with its torch, and my eyebrows (4) and eyes (4) full of bags with parasites eggs, and the biggest egg is stuck in my nose (0)
UPD; just forgot 4s, bags and eggs are mixing up…I changed my eyes to caves filled with a lot of bags, and a line of bags instead of my brows.

For Australia is like I have some weird hair, but I am looking closely and it’s actually a koala on my head with its weird fur. Then three numbers, so eyebrows, eye, nose. And it’s 300. So I have skin from my brows cut out and earphones (3) are put there instead, skin kinda healing, there’s drying blood on earphones. I have white chicken eggs (0) instead of my eyes and can even see egg yolk inside through the semitransparent shell. I have another egg (0) deep in my nostrils too, but they cracked and yellow yolk goo is dripping from my nose.

For Canada I have little maple trees instead of hair, and I don’t have eyebrows at all, but I am drawing them right now with a pen, (1) and eggs in my eyes (0) and nose (0) are similar to Australian image, but they are not from a hen, but from a Canada goose, a little bit more gray and bigger.
Hm, eggs are kinda repetitive at that point. UPD: the pen is wooden and made from maple, and I am growing hundreds on my brows.

For South Africa I have a cup of scolding hot boiling rooibos on my head, and it splashes that hot rooibos on my eyebrows, that are the same as for Australia, earphones (3) instead of my cut out brows, and they don’t work properly now because of that hot south African rooibos on them.
Ha, I feel the need to connect all this stuff because it’s getting a bit confusing, so Australian koala from 300 image is trying to get my earphones from my eyebrows, out of the skin, too. And I have iPhones instead of my eyes, and I am afraid of rooibos getting on them too and they stop working…

Hm, interesting idea. Get’s a bit cramped and requires some effort, and obviously getting used to. I wonder how practical it really is. I’ll try to use it here and there.

I am trying to get into memorization stuff but not doing much in that direction.

I keep forgetting zeros (eggs) in Australia’s 300. I made koala hungry and its goal to get and eat the eggs.

I think I am making mistake trying to see the number as a whole, and I need to go through body parts like trough the rooms in a house - hair, eyebrows, eyes, nose… Yeah, using that method requires some training.

The more vivid images in ur mind the clear memory u got. One thing i noticed you keep repeating the memory palace from head to nose. In fact u can keep going to mouth (next country sign), neck (next group of numbers), belly … It’s not necessary to start again from head to nose.