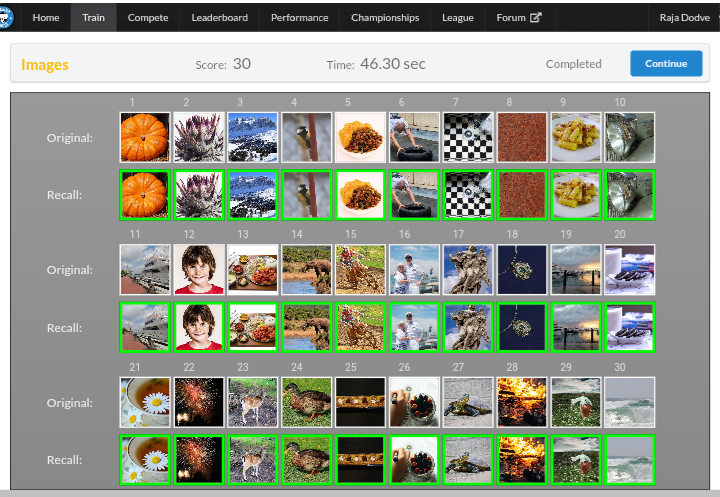 Fantastic! Keep it up

good job try to beat your score and become better

When I do this , I am very excited that I am doing this in only 39 sec but I did some mistakes.

I use my Pronunciation System means it is similar to PEG system for memorizing images.

And with my peg System, I achieved my personal 39 sec record for images in ML.

And now I am trying to memorizing images with Memory palace.

I have three trials regularly.
So I think I use my one try for images with method of loci.

And other for my system.

Is this a good idea?

Great achievement with your system. Welldone!

Finally I beat my previous score and now this is my new best score. 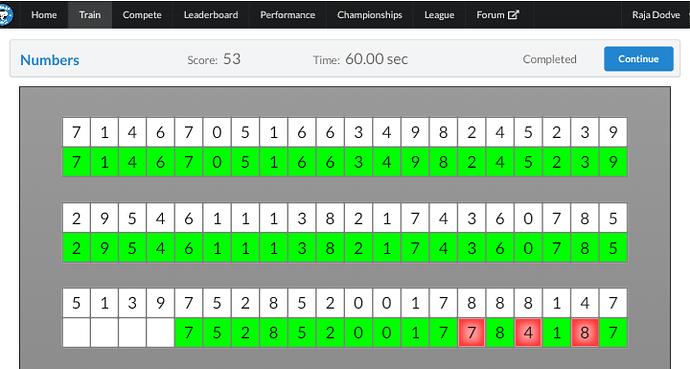 Amazing score! Welldone.
The first 40 digits are 100% recall. You almost did it on the third line too.
You will do it very soon!

Thank you Erol for appreciate me.

@Erol
I want to ask some questions from you.

First when I did not do it I think my Pronunciation system is not very strong than major system.

Because many of us use major System.

So I did not realize that my system is well perfect. And I practiced major system.

And today first I try to memorize 60 digits in memory league by major system.
And when I am recalling the number I am forgot what I memorize. And recalling is also slow from major system.

I tried hard to recall but I forget everything and that time I thought where is number in my mind.

This is my score by major system.

And next time , in my second try I am using my pronunciation system and achieved my new best score

When I am recalling the number I am also forget some numbers than I speak counting numbers very fast in low voice.
10 numbers in almost 1 to 2 sec to speak.
And I got it which number I memorize.

Example - 24 in my language is called Choubis
And I Pronounce it as chabi🔑.
And when I forget 11 than I speak very fast untill my number is come in my mind.

If you ask me when number is big like 76 or 89 .
Than I simply see counting numbers in my mind.

And now I think I can do it by my system. I do not need a major system .

What’s your suggestion about this ?

It seems your system is working well for you. If it’s easier and faster than the major, then it would make sense to stick with and keep improving.