Ah, I so enjoy reading training the training journals on here, and so I thought to try my own!

As my focus tends to stray a bit, I thought I would do mini training journals! Technically it’s an ordinary training journal, except I will define specific concrete goals to focus on one at a time, plus a fancy name.

Each goal will be it’s own “mini journal” and after having completed one, I can start the next. I will keep them all in this topic, though. Working on other memory projects is allowed, but I want to bring my focus back to my current goal again and again.

I like working with kids, but whenever you do work with kids, it’s best to have some tricks, games and general activities up your sleeve. I would love to expand my repertoire, and I think learning string figures would be a great way to do so!

To start, I would like to learn 15 different string figures and memorize the process of making them. My goal is to:

I want to memorize the instructions, so that when my muscle memory has faded, I don’t need to look up them up online – I can just look them up in my mind

My aim is to work everyday towards this goal, even if it is just 30 sec.

Alright, here we go! Let’s see how it goes

So far, am going strong and have done something towards my goal each day!

I now know the names of the strings and one string figure, but haven’t memorized anything yet. I am trying to think of how to convert the instructions of creating the string figures into characters/images/stories.

The strings are named according to which finger they are looped around and where they are in relation to you (near or far). The fingers are just called their regular names, plus whether they belong to your left or right hand. My idea is to make each finger a character and each hand into a family. The strings I will turn into objects. So when a finger is moving a string, a character of a family is interacting with an object.

Other information can also be added, say if I need to move one string over another, the character can also move one object over another. Before one arrives at the finished figure, there are patterns inbetween, which I could also embed in the story. Like this I can give myself clues to whether I am doing it right or not, even without images to check against.

I also thought of linking the first “event” in the story with the name of the figure or its appearance. So when I remember the name/its appearance, I have a link to the instructions.

Not sure if this is too complicated – I might simplify it. We’ll see! For now these are just thoughts, I haven’t come up with any of the characters/families/images yet.

Side note: String figures are so fun

They sound cool in theory, but they are actually entertaining when you do them for real! I showed the one string figure I know to a few kids today, plus a bit of cat’s cradle (which I vaguely remember from when I was little) and they were enthralled ^^

Still haven’t come up with any images and progress has been minimal. I have worked on this every day, but just for very little time.

I think the issue is that although I have a concrete goal, I don’t have a set time by when I want to achieve it by. So…let’s set a time

The task can be broken down into:

By this week Thursday I want to have completed the steps. Monday and Tuesday I can work on distilling the instructions, on Wednesday I can create the images and on Thursday memorize them.

The first step I alteady completed and I even made a neat little table! 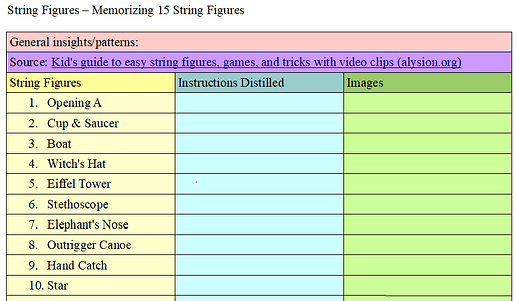 So we’ll see how this goes.

Okay, setting a deadline and also sub-goals to accomplish has really been useful!

I have now distilled all of the instructions, set up characters for each family and objects for the strings. For one of the figures I have turned the instructions into images and strung them into a story. It is so bizzare, I went through the story and was actually able to create the string figure from it! So cool. I still have all the rest to go, we’ll see how it goes!

And here is the day of the deadline! I’m so glad I set myself one, otherwise I think I’s still be choosing string figures

I can do all 15 of them through muscle memory currently, have turned all the instructions into images and conected the images through story. Most of my goal has been met! The part about having all of the instructions memorized…weeeell, I didn’t quite get to that yet. I put the 15 stories into Anki, though, and my plan is memorize them over a longer period of time through spaced repetition. We’ll see how it goes!

As most of my explanations have been a bit vague, here some more concrete information of how I went about things.

So I said I would turn each hand into a family and each finger into a character, this is what I came up with: 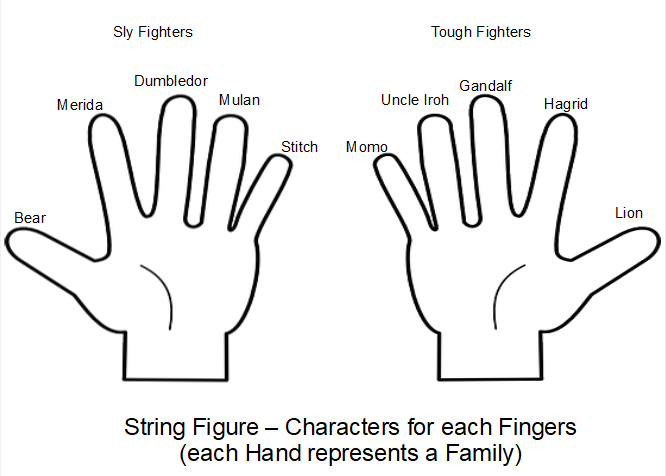 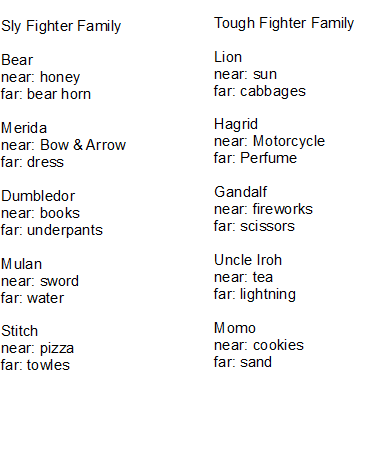 (Anyone who has seen any media in which these characters pop up in, may notice that perhaps any or all of the things I chose are quite random and don’t line up with the actual preferences of the characters. Whoops.)

RIght after I finished that and tried to implement my system, I realized that for the large majority BOTH fingers have to move, say both thumbs or both little fingers and do the same action. Which meant if I wanted to say to move the little fingers over the forefinger strings, I had to write “Momo and Stitch move over a Bow & Arrow and a Motorycle”. To avoid having 4 images for an action that essentially entailed two pieces of information, I made a hybrid family.

So whenever I need to say move both of my thumbs, it’s not Bear and Lion who do the action, but Bearon. For assigning the objects for the near and far strings I just contemplated which objects both of the characters might like or dislike.

Here is an image of a filled out section of my table:

I hope this makes it a bit more concrete. It was definitely fun and if I now put some effort into memorizing the stories, then I have no worries that with 80 I will still be able to create these wonderful figures out of string.

Although I have set up some memory palaces, I am always left empty handed when I need one. The journeys have been established, but not securely fastened into my mind.

So, as I would like to pick up my red&black card training, I would like to have 15 secure and readily accessible memory palaces. In addition, I would like to create a mind palace to store my memory spaces in, sort of like a meta mind palace. That’d be super handy, as I often ran into the problem of wanting to choose from one of my journeys, only to realize that I am not quite sure what exactly those journeys are and how many of them I have.

For this I would love to take three days, so be done with it by Monday, and I want to work towards my goal each day for at least 30 sec. Let’s see how it goes!

It’s Monday and I am pleased to say that I now have 15 memory palaces set up, each with an Anki card and a symbol in my now existing meta-palace

Not as Easy
Phew, actually, setting up mind palaces takes some mental effort. I did 5 today, and I needed to take breaks and took a lot longer than I thought I would. I think setting up memory spaces will get a lot swifter with practice, just as placing the images and making them memorable.

A Lack of Variety
After finishing my mind palaces, I did a round of r&b (memorizing the order of red and black cards). I found one of the palaces a bit tricky and made some mistakes. Maybe because I don’t know it well yet but also because of some issures with the loci. I tried to get a little more out of the space, so instead of making “floor” a single locus, I divided the floor into three parts: “left side”, “middle” and “right side”. The issue with this is, I think, that those are just three bland positions that look alike and the characters don’t really have something to interact with. In “Memory Craft” Lynne mentioned that for speed you need variety, so perhaps I will use more distinct locations for future memory palaces.

Enter: Vriety
I am trying to review my 15 memory palaces and it is sort of going well. While I work to secure my not-very-stable-memory-palaces-because-some-of-the-locations-are-giving-me-trouble, I thought I might set up some additional palaces. This time, though, using the space much more generously and doing my best to preserve variety.

Palaces Set Up
Okay, finished setting 5 memory places up with some more variety included. The new memory palaces solidified faster in my brain, but now that I have some more practice with my other ones, too, they cease to give me as much trouble.

I’d like to keep reviewing my now 20 memory palaces using Anki, as I hope that my times doing r&b will get better through it (I am already below 3 minutes, with two mistakes, though).