Memory Advice for Persons and Objects

I just wanted to share something that I do which I found helpful in the memorization process. Each person in my system has a particular feature, action or characteristic. If I have a person and an object or a person and a person in a memorization sequence I typically have the first person always do the same action to following object or person.

My image for NF is him holding a balloon. 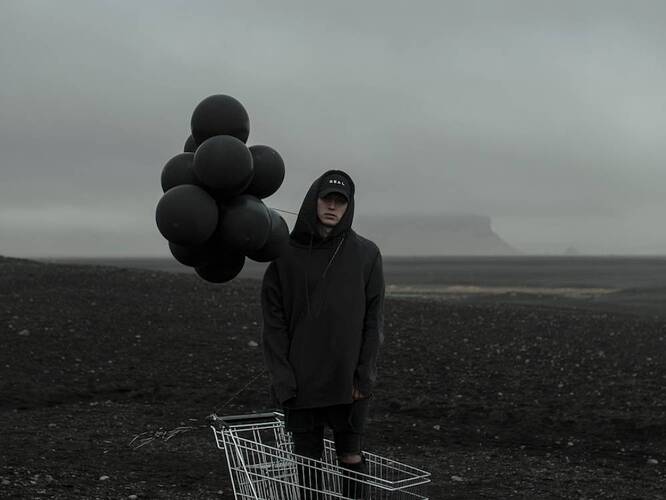 Then I would imagine NF holding a sofa on a string that is blown up like a balloon and suddenly popping.

@RonaldJohnson, I think you are on the right track. In my analysis of memory images, I’ve identified pieces that combine strongly correlate a subject with other unique pieces. That would be your feature and characteristics (I call them enhancements) and the action. The action then is directed to an object or person which is essentially a direct object in grammar.

In your example, I might pose an alternate image in which NF (subject) is being pulled up by the balloons which will explode (action) to get more excitement going. As the balloons pop, he would fall down on a big, overstuffed sofa (the direct object or item). I like the sequence of action and reaction for a visual image.

I notice that you also have a good background to work in that I would wrap into the image. The balloons would float up to the bottom of the cloud cover and then pop.

Then I would imagine NF holding a sofa on a string that is blown up like a balloon and suddenly popping.

Here’s where I see the issue with this particular approach:

Then I would imagine NF holding [000 - 999] on a string that is blown up like a balloon and suddenly popping.

I’ve talked to people at competition before about forgetting parts of images. Usually, they were using PAO and the A or the O was the issue. Note here that if you get two digits wrong on a particular row, you’ll lose all 40 points for the digits on that row.

So normally (including me) when you have this issue, you’d leave a couple or blanks continue with the rest of the recall and then you go back to the image you has issue with. With PAO it’s easy… you just go through your As or Os from 00-99 until you find an image that seems to be the one that you placed there. Obviously, that doesn’t always work… sometimes things are too closely related and you already accepted your object for 27 when really it was 56. Let’s say the one was a rocket and the other one a plane.

What I’m trying to say is that, in baseball terms, you are pitching without a catcher. All your “connectivity” comes from 028 and nothing from 008 really links back to it. There is nothing distinct about the “sofa” being on the string.

I notice that you also have a good background to work in that I would wrap into the image. The balloons would float up to the bottom of the cloud cover and then pop.

This to me also just strengthens the 028 part of the image and does not for 008. Don’t get me wrong… let’s go with dancing instead of baseball, obviously you need somebody to lead (028) but your dance partner also needs to know the steps (008). So really the “sofa” should also connect back in only a way the sofa could, but in a way that you know who’s leading (i.e., which number comes first)…

NF (subject) is being pulled up by the balloons which will explode (action) to get more excitement going. As the balloons pop, he would fall down on a big, overstuffed sofa

…more like this for example. Even though the balloons become really unnecessary now and unless the sofa is always there for people to fall on (i.e., from 000 - 999) you should make up the connecting action on the fly. Mostly because the next issue will be linking things to a location to ensure that actually remember what happened “there.”

Imagine, you get the image in the bathroom… he could stuff the sofa down the toilet. If under a tree, you it as a swing, etc. Hope that makes sense.

Do you mind if I ask… did you have a PAO before you changed to 3-digt and really liked the convenience that PAO gave you the sentence structure subject-verb-object without you having to put much of an effort into creating the image? I mean in terms of LEGOs I understand what you’re trying to do with this approach… just letting you know where I see potential issues with this approach.

@bjoern.gumboldt I like your thinking for creating solid images for competition especially so that the weaknesses can be made clear. I’m trying to develop some rules about what works well and what doesn’t in associations within the memory image.

I do think that the PAO system is helpful for offering images and structure. And the image associated with the peg system of choice, such as a palace for the popular system, adds another association between two images. But it does create more mental load, making it slower in competition, measured by a metric of efficiency that I created.

I really didn’t fill out all the narrative sentence logic I think on this one. How about this? A location of a bathroom (palace) and the clouds (location used to blend the two) are steam created from the shower, NF (subject with enhancements) wearing his black raincoat holding his balloons is miserable and floats up and drops (action) on the sofa (object) soaking wet from the rain when the balloons burst.

This, of course, is just a basic sentence narrative and uses an action on the fly for the two digit groups. @RonaldJohnson has moved towards the narrative style and in that traversal style, the subject is best enhanced I believe with a permanent relevant action as well as the other features like he recommends. That way, the story can progress as either the protagonist, the subject, continues acting on other objects or the object becomes a new subject. I’ve struggled with creating good images in a narrative in the right order also, using three groups of digits, so that’s the motive for knowing how to compose a good memory image as a visual sentence,

I agree with you. You definitely need to have a good catcher if someone pitches and then follow the play to throw the runner out on first base as he tries to steal second. Or you have to have a good dance partner following your steps and know who to go to when the caller says “Swing your corner.”

Very insightful, thanks for sharing! I will continue to ponder on what you have commented. To answer your question I did not have a PAO before but I started directly with a 3 digit system because I knew if I started a PAO I would eventually move to a 3 digit system so I said to myself that I might as well just start with a larger system. In terms of a characteristic being connected to the person, I was inspired by a comment by Lance Tschiarht regarding his relationship to images. He tends to describe his images in a detailed and attached manner, almost as if they were entities and not merely symbols.

In an interview he made the statement that every image in his system has a particular feature so “Rail” has a particular green that only the rail has or a shotgun has a particular type of rust and each image leaves a unique mark on the next so that by looking at one image he immediately knows what came before it because the mark is tied to the characteristic of a certain image.

The mark of “NF” (028) is that it turns the next object into plastic and pops. So if I see a sofa (008) made of plastic that pops I can know that the preceding image is automatically NF even if I didn’t memorize 028.

Good point about tying the image to the locus, that one should have a reason for why an image is at a locus and other than “I visualized them near the location.”

I noticed that I recall images more quickly when there is movement or something strange occurring. So a sofa is usually not the texture of a balloon, so that is strange to me and the sofa pops, and that is movement. When I have sound, movement and absurdity I noticed I have better recall. Also like you mentioned when I provide a reason why it is “there” in the locus.

Also because I found persons more difficult to memorize than objects. It is easier for me to link an object with another object than a person with an object so I gave NF a balloon. Also there is a certain mood associated with his presence. The locus is dark and gloomy so I recall the color or mood as well.

Good point about the plane and difficulty recalling certain actions and similar objects. I will ponder on that point more and make some changes.