Howdy. I’m new to this form and I want to ask for some help.
I work at a retail store in a smallish community, and I’d think it would be cool if I developed the ability to remember everyone that I served that day, how many I served, and remember what kind of items they bought.
My problem is that I don’t have a name that I can work with the face. I only have the face to work with. I’ve tried to just pick out some key characteristics of their face, like: Square-ish glasses, looks like a librarian, has big ears, etc. But it just doesn’t really stick in my memory like I’d like it to.
I tried to make a memory palace trip, which each location representing the person, as in: A location for their face (looks like a boxer, I put him in a boxing ring), and have them doing something relating to what they mainly bought (they mainly bought sweets, then I have them eating sweets).
But the problem is that:

Thank you.
Hope everyone is doing okay with this Corona virus epidemic happening right now.

It takes waaaaay too much brain power to produce while serving people.

This is typical of a new skill. At first when I was learning the Major System, it took a lot of work to encode and then come up with mnemonics. After a while things become automatic. Perhaps set your immediate goals a little lower. Don’t aim to memorize, just come up with some characteristics or a story about each person as you encounter them. In the first stages this doesn’t have to result in anything useful.

Hi Mr Montana,
I am sure that there probably is some way of doing this, and someone very clever will come up with a system. That person, I guess, will know about a concept named the Zeigernick Effect.

It’s a fascinating thing - much deeper than the little blurb which follows:
(this is from Zeigernick Effect Explained

Discovery of the Zeigarnik Effect

“Lithuanian psychologist Bluma Zeigarnik observed the effect of interruption on memory processing in 1927. Whilst studying at the University of Berlin, her professor, Kurt Lewin, had noted how waiters in a cafe seemed to remember incomplete tabs more efficiently than those that had been paid for and were complete. This appeared to suggest that the mere completion of a task can lead to it being forgotten, whilst incomplete tasks, such as serving guests a table who had not yet finished their meal, helped to ensure the waiter remembered their order.”…

That was only the ‘discovery’.

It applies to more than waiters. It also applies to music - I can play a song - then forget it after I’ve played it - even if it has been a long session with many takes… It is as if I had never played it at all.

I have a couple of personal examples which I’ve seen with my own eyes: One is:

Couple of years ago (2018) I was through in at the Edinburgh Fringe Festival and we fancied a curry/
We went a restaurant called Cafe India, Edinburgh is mobbed at Festival time so we thought there was very little chance of getting a table, right enough the restaurant was packed out with tourists and we saw people being turned away at the head of the queue, but we stood in line for a good ten minutes just to ask about getting a table. Once we did, my wife asked very sweetly whether we could book a table in an hour or two - as we could come back. The manager, harassed, working hard with hundreds of things going on around him replied to us, “We are full, so it might be a while”, we said that’s okay and he asked “What’s your name?” I told him mine “K. Mister K”. “Okay.” He said “Come back in an hour.” - He did not write my name down and immediately started speaking to another group of hungry people being driven crazy with the beautiful smells…I was sure he would never remember.

We went back an hour later.
I went up to the lectern, just inside the restaurant. Where a junior member of staff was, he said they had no tables… but then from the back of the restaurant the manager who had taken my name came up and said “Hi Mr K, follow me”. I was amazed but knew of the Zeigernick effect and thought it might be that…

Half way through the meal the manager was doing the rounds and we got talking - I made mention of his remembering my name - and he looked puzzled, because he could not remember it… We then got into a wee talk about memory - I told him my interest in the subject. Although I can’t be sure I suspect that this is the Zeigernick effect in action.

Incidentally I remember “Zeigernick” by thinking of a ‘nick’ - (=Prison in UK slang) on the snowy slopes of the Eiger (great big Mountain in the Alps)… the Z I do not have to encode.

Good luck with your attempt - though it seems a bit of a challenge. I’d probably associate each person with a time (encoded as a visual) and one of the things they ordered. But it would not be easy.

For starters just place each person at a loci, 2 person per loci. Now when they leave, try and recall which loci you had them in.

Expand slowly from there, such as the time they came in.

I tried this whilest waiting for relatives to finish shopping and literally had to set outside the maket door for 4+ hours. It is really fun once you see the same person coming out again and know which loci you had them in

I also did not made the palace before hand (too much work), I just had it set at one of my old high schools and slowly made the loci as I go (placing people at the first object or thing that I notice as I walked imaginatively in my school). You can also reuse the palace you made the next day pretty much.

I could not get everyone that came in and out of course, sometimes it was just too crowded XD

I’ve read the whole post, and learned something new. It’s kind of a psychological effect but seems to work well. I’ve also read the full article just now and learned that it is also used in Ads. So it seems all of us are hypnotised by these methods while watching TV lol.

Incidentally I remember “Zeigernick” by thinking of a ‘nick’ - (=Prison in UK slang) on the snowy slopes of the Eiger (great big Mountain in the Alps)… the Z I do not have to encode.

Just Googled the Eiger mountain, it’s a beauty and a half. Because like you I wanted to memorise the name of this effect.

I see a Zebra running up to the Eiger mountain and gets nick-ed by prisoning its own self.

I always wanted to go an experience the Edinburgh Fringe Festival. Not a chance now tho. I hope someday I will, living only a few hours drive from Edinburgh I should have done it while I had the chance.

One of the best ways to memorise the names is to have an object for each name. These objects has to be memorised beforehand so that it can be used in an instant on the person.

When I started learning names and faces, the very first example was Karen and Carrot.
Because the object sounds similar to the name. it made a lot of sense to learn a few more and then a few more. Carrot is now always used on a person named Karen.

To achieve your task at a good speed, you’d have to find a library of these objects used on names, memorise them all, and then practice. There are some books you can find on amazon about this. Ron White and one of his students Luis Angel are probably the better choices for it.

You can then use the memory league website to practice. https://memoryleague.com/ and perhaps use Facebook and practice it with peoples names and faces there also.

It’s actually “Zeigarnik” with an a. 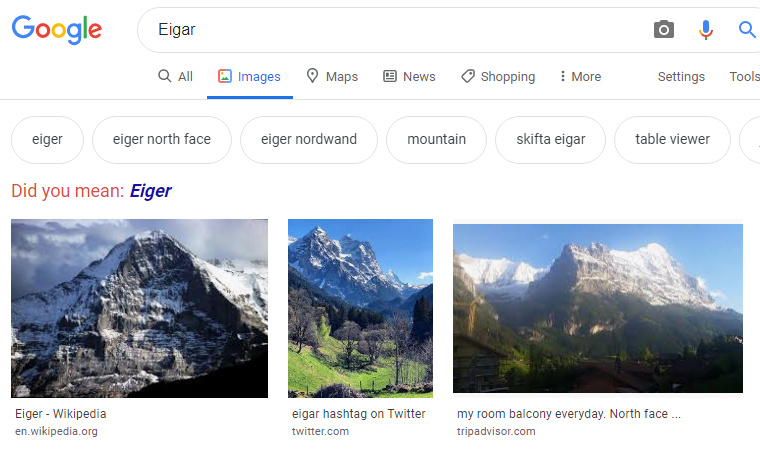 True (for the mountain), but I was talking about the Russian psychologist Bluma Zeigarnik, who the Zeigarnik effect was named after.

It’s also my bad I didn’t put Z in front of Eiger and both showing those beautiful mountains on Google.

Bluma reminds me of Blue-Moon.

Now it’s even more strengthened in my memory

I’ve spent so much time on this, I don’t think I’ll ever forget it.

Actually… (well, you know me)

…that is the Ovsiankina effect, name after Maria Ovsiankina, which is the tendency to pick up an interrupted action again when it has still not been achieved. Whereas the Zeigarnik effect leads to a better remembering of the unfinished action.

Now it’s even more strengthened in my memory

I’ve spent so much time on this, I don’t think I’ll ever forget it.

Some say that is why attempting to replicate Zeigarnik’s experiment in later studies, failed to find any significant differences in recall between “finished” and “unfinished” (interrupted) tasks.

Technically, Зейгарник but since it was published in German 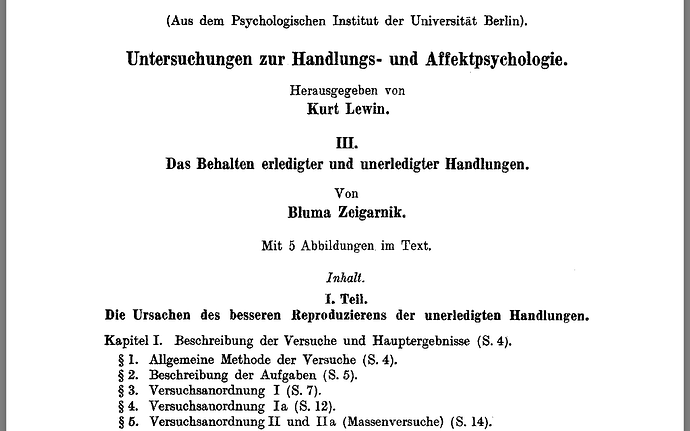 Bluma reminds me of Blue-Moon.

Bluma in Yiddish and Blume in German means flower.

I see a Zebra running up to the Eiger mountain and gets nick-ed by prisoning its own self.

I always wanted to go an experience the Edinburgh Fringe Festival. Not a chance now tho. I hope someday I will, living only a few hours drive from Edinburgh I should have done it while I had the chance.

As for Edinburgh Fringe - yeah it has been cancelled this year - now this is a DISASTER. I have clients who were scheduled to do some gigs there. If its back on again next year - do go - you will LOVE it. I can probably get you free comps for really bad shows too…
As for the memory angle - Mr Montana should come too… I culd probably stretch to two sets of comps… 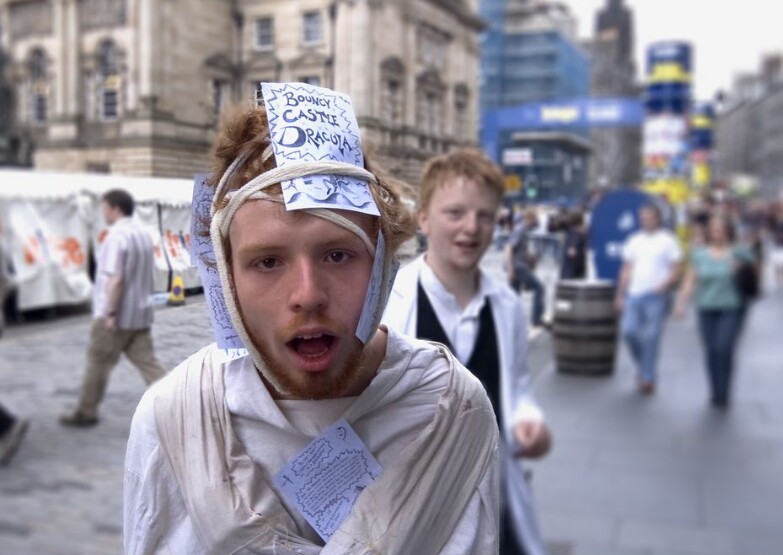 Also cancelled is the West End Festival (which takes place four streets from where I am writing this), as you can see from this photo I took (I think two years ago) there might have been a “slight” issue with enforcing social distancing… 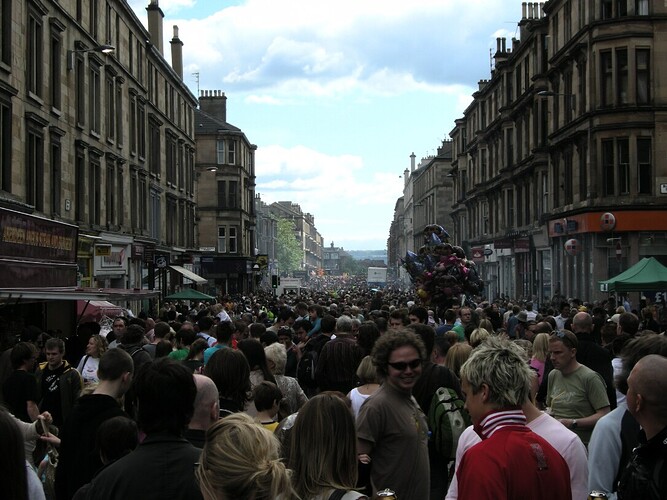 Hope everyone is doing okay with this Corona virus epidemic happening right now.

Howdie! BTW are you actually in Montana?
Everything here in Scotland is a bit… unmemorable as far as the V word is concerned, let’s hope it goes away sooooon

As for Edinburgh Fringe - yeah it has been cancelled this year - now this is a DISASTER. I have clients who were scheduled to do some gigs there. If its back on again next year - do go - you will LOVE it. I can probably get you free comps for really bad shows too…

Absolutely brilliant! You are the first entry in the 2021 diary! Just to remind you: free tickets for really bad shows (i.e. not Tim Vine or Paul Merton or Giles Brandri-what’s-his-name… It’ll probably be some grunge group from Govan)
Take care - don’t go looking for cockles!