Do you have a number memorization system yet?

@Josh I use the Number Rhyme System

For me, it helps a lot if the numbers are important to me.
I calculate during the day with numbers and I am actually interested in knowing the answer for the calculations I make. This helps a lot.

If you are just interested in calculating with random numbers, use a memorisation system, like @Josh said!

Sorry for the late reply

I had to look for an earlier reply of mine on a similar question.

Basically the method I use when completely mentally calculating is a mental grid. Since posting it I have been practicing with larger numbers and have been capable of doing it up to eight digits.

The image from the other reply I was looking for was this one: 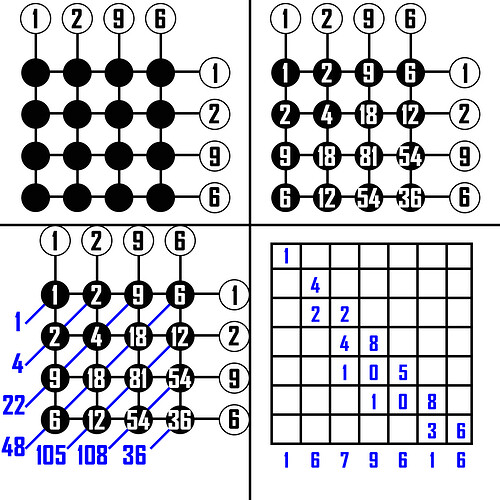 Basically I put number A on the horizontal axis, and number B on the vertical. I then multiply according to the grid, add diagonally and then add those outcomes according to their actual value.

The grid is a palace, in which I place my persons. The highest number possible in the grid is 81 (from 9x9) so a 00-99 PAO would be enough for that one.

When adding diagonally, I use a second palace with a multi-person 0-9 system. Lets explain the system first and palace second.

With larger numbers, I realized that I ended up with 15 outcomes when adding the diagonals. Each with up to 3 digits (apart from the first and last, where it is two digits). That is a maximum of 43 digits. To not get confused if 10 of those are a 2 for example, I created a multi-person system. I picked 10 actors/actresses who play very diverse roles. The digit can then be any of those roles. That gives me less repetition, but still a logical 0-9 number system.

The palace is a stair palace. It is 20 layers of each 3 loco. I place the diagonal outcomes horizontally on the layers, but then add them vertically right to left. I can then use the same 0-9 system to place the answer to the question on some loci to get the answer.

Maybe mental mathletes have better systems for large numbers, but I figured it would be a nice challenge to use my grid method and see how I can use it mentally. And you tagged me, so I deliver

I know your system, as you pointed out.

But how to memorize the grid… that’s the question… I use rhyme-number system; however in your grid there are so many factors to remember that I will be completely lost after the first digit calculation

That is just a grid-shaped memory palace

I have no memory palace yet… so hard to build one

A peg list or story can work too, but I figured those would make it hard to keep track of the locations in 2D space. It is possible, I’m sure, but it was not for me.

If you dont have any of those, it might be fun to try something out and see if any work for you

Basically in my palace there is a sort of pattern that helps me figure out what to add. I have ten kinds of rooms: Living room, Bedroom, Kitchen, Bathroom, Garden, Workplace, Garage, Hobby room, storage room and washing room.

I have ten sub-palaces that are all a long line, in different themes. Each have the same pattern of room-order, but a different starting room. So in each palace, the rooms shift one spot.

The first ten diagonals are all just the normal rooms. I add them based on type. Diagonals eleven to nineteen are the same room types as usual, but every room is on fire, so I dont add up diagonal 1 and 11 for example. Despite both being living rooms

So basically, room type becomes a marker of what to add.