Good objects to use as memory palaces

So I’ve seen a few threads on here about using objects as memory palaces. I’ve tried it myself with some success. For example, I memorized my credit card number by putting images on different parts of an eagle (because my credit card has an eagle on it). The problem is, I’ve noticed most objects don’t have many loci on them, which means you need multiple, disconnected objects to memorize a long list. The advantage of using a real house instead of a series of objects is that a house has many rooms all connected together in a clear sequence, whereas a series of objects are disconnected. I’d love to have an object with many loci so that I can use the same object for a long list (like the U.S. presidents, for example). Any suggestions?

If you have a landing tray at home, take a look at that. It is good for at least 20 loci at my place.

If you have organized your cupboards and cabinets, those form great places. My kitchen alone could be a 150-loci palace if I would want it to.

If you really want a single object it gets tougher, but not impossible, as long as you manage to create a journey. Basically for as easy palace you want things with multiple parts or functions of which you understand how it works. Bikes, cars, computers, printers, that sort of thing.

Excellent suggestions! I have never thought about using cabinets and cupboards. And yes, mechanical things seem to be better suited as memory palaces. I’ll do some more thinking.

This is the difficulty of using imagined memory palaces over actual places for memory palaces. It seems to be a big debate with some, but the bottom line is they both work. I use mostly places I have been to before, but I am getting to a point where it’s about 50/50. When I create a new memory palace from my imagination, I make a memory journey with a character for the loci in the palace first, then I input the images to the loci. Usually, I’ll have the character that “lives or works” there walk through to each locus. The character can work as a guide, giving another layer making it more memorable with an added trigger.

I’ve never heard of putting a character or “guide” in a palace, but I can see how that would definitely help, especially with imagined palaces. Thanks for the tip.

I’ll do that when I’m having trouble recalling, or it’s information I want to memorize long term, and needs to recall quickly despite recalls being infrequent. I’ve only done it in a few, but in the beginning, it really helped.

There is an ancient memory technique invented by Hugh of Saint Victor in the middle ages. The method is quite simple, you need a grid of ten or more objects ordered by number, for example an alphabet of objects: A stair, B bow, C a magnet, D a saw, etc. Or in modern times you can use the major phonetic code to have a larger order of objects. The objects follow the order of number. You no longer need places, only a rigid and still sequence of objects of diverse genera. Later you can use in one image, five different places: Center, upper, down, right and left. Azcevedo describes also this method in his text «El Fénix de Minerva o Arte de la Memoria». Greetings from Mexico.

Wow, that’s brilliant. Thanks for sharing! I’ll look into this more and give it a shot. 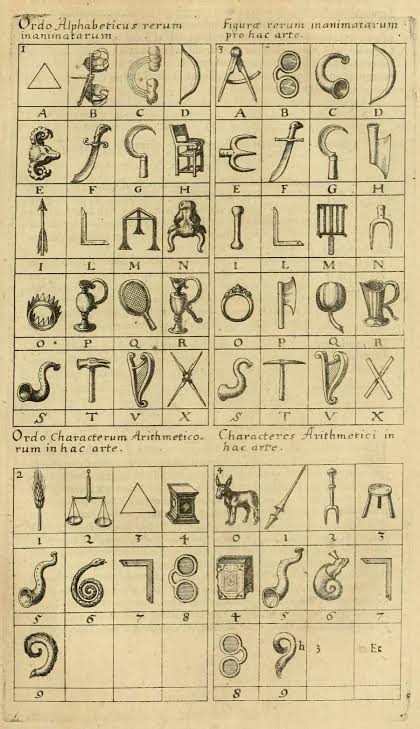 Thanks for the knowledge and pictures. I think I’m going to start reading Azcevedo’s book when I get the chance. By the way, what’s the name of the book from the page you uploaded?

Hi friend, you can find these and more alphabet’s in Johannes Romberch «Congestorium artificiose memorie» and in the treatise of the Italian polymath Giovanni Giambatista della Porta «Ars reminiscendi». The system has more mysteries, but English is not my first language, it’s difficult to me to explain more thoroughly.

The problem is, I’ve noticed most objects don’t have many loci on them,

Don’t think I agree with that. Even on a billiard ball I could find six. On a teapot, perhaps 20. Perhaps give some examples of objects you find ‘sterile’ and see if we can come up with ideas.

y loci on them, which means you need multiple, disconnected objects to memorize a long list. The advantage of using a real house instead of a series of objects is that a house has many rooms all connected together in a clear sequence, whereas a series of objects are disconnected. I’d love to have an object with many loci so that I can use the same object for a long list (like the U.S. presidents, for example). Any suggestions?

I use my car, airplane, bicycle, my body, hotel rooms (normally 20 loci in each). I tend to put two objects in each location which works generally well for me. I tend not to use things that look similar, ie, hand or someone mentioned a cabinet, cupboard or bookshelf, which doesn’t have enough differentiation for me. Some people can distinguish location easily, unfortunately I can’t so I say away from them.

First I avoid repetitive shapes: rectangles, squares triangle shapes that have no features. They seem to ghost in my imagination and its irritating trying to separate the objects. So i would avoid shelves and plain doors etc if you are a lot of palaces.

In front of me I have a rectangle speaker. However, it has loci such as the speaker grid, is brand name, screw holes and an indented silver tweeter. That being the case I can use that speaker as a palace and get about ten objects on it. So for me an object used as a palace must have interesting tags or loci points. I also have next to me a laser printer which would be a real delight to use as a palace with its buttons, recesses, paper tray, vents and do on. I would get 20 objects on that printer.

All my palaces are quickly sketched as line drawings.

One interesting way to gain multiple palaces easy is to do the following with your pegs:

Tie: I imagine my local Burtons that sold ties and suits.

Noah: huge ark with portals and maybe a giraffe head out a window all on a mountain

Rye: (bottle whisky) think of a local pub/bar with its chairs snooker table…

Law: policeman who used to stand at high street crossroads with shops either side of him. Lots of loci there.

If you have just ten loci in these ‘peg palaces’ you easily have a 1000 loci.

As regards ‘objects don’t have many loci on them’ the trick is to think big. My eagle would fill a page. Using above/below/sides…of the eyes, beak and the rest of its features including talons. It would be a great help to dissect the eagle into quadrants with lines and treating each quadrant temporarily as ‘separate’

As regards objects being disconnected, it’s all a matter of perspective. What we are doing is a standard room palace but placing a lot more objects per loci rather than one or two. The only reason is that some just use one object for a palace is because all that’s needed is 10/20 pieces of info.

Nothing new here just standing on the shoulders of giants…