I was trying to think of an idea to teach how to memorise E = MC2 to a friend of mine who is studying maths. I am not good at maths apart from the basics, so I could only give a basic example of memorising a simple formula using mnemonics, that’s why I chose Albert Einstein’s famous formula; Energy = Mass Times The Speed Of Light Squared.

I did some searches on google, but there were almost nothing designed with mnemonics for e=mc2. So I decided to design one myself. And I did.
When I showed this sample I designed to my friend, he laughed his head off, and said “I would never forget that”. With this single image, I was able to easily teach him how he could do it himself. I’ve also recommended him to join the forum if he wanted to go further with it. 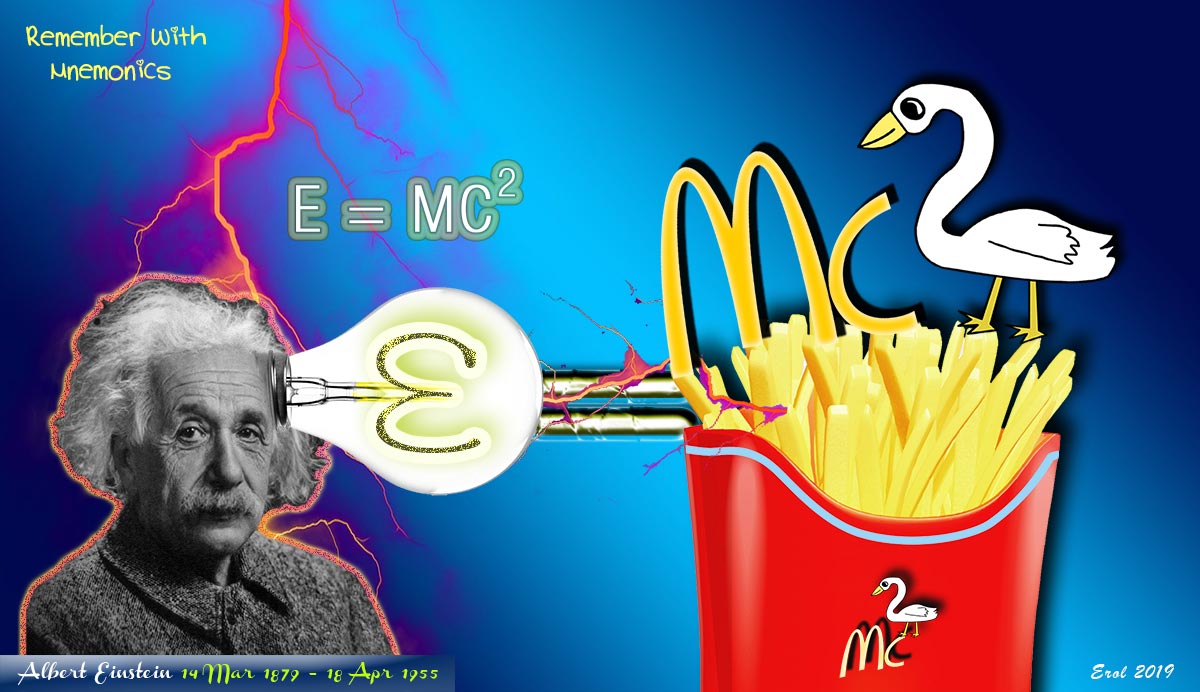 Notice the Lightning is striking the head of Albert Einstein.
The electrical Energy on his brain Lights up the bulb. Eureeka!
Notice the Glowing Wire in the middle of the bulb as the letter E.
The initial of his surname “Einstein” also starts with Letter E.

Albert Einstein’s is also the creator of this formula.
So the " = " sign is represented by the electric-powered iron bars that gets its Energy from the bulb, cooks his favorite French Fries In Lightning Speed at his Own company " Mc- Swan " (2)

Hey @Erol. It’s Kemsimba. This is awesome! I was laughing all the while reading and looking at the whole thing. This an awesome image to cement that information. I wouldn’t forget that either. And of course, it is great that you created your own way to remember since no one has uniformly.

Thank you @Kemsimba!
I sometimes play around with mnemonics to create some stuff that I think may be usefull to others as well.

Glad it made you smile too