Do you see your body when you "walk" through your palace?

This may be a silly question, but I’m curious. When you walk through your memory palace, do you see your body from a first-person POV? From a third-person POV? Not at all, as if you’re an incorporeal observer instead of actually being in the palace? Which one should I aim for?

Nope. That last thing you said, like I’m not there at all. I would think it would be more work and trickier to view it in third-person POV mode, but really, you’ve got to try it out yourself and see what works for you.

I often feel like the camera observing what is going on, not an actual person. In more complex things to remember however, I do make it a first-person view from my own eyes, to incorporate other senses in it, like touch and smell. I really see myself walking through (that part of) my palace. But generally I just stick to the camera/observer moving fast and smooth through the palace, never standing still for even a second

I don’t picture myself in the journeys. The way I visualize it is a lot like how it appears in this video – rapidly jumping from location to location, viewing an object, and then continuing to the next one: 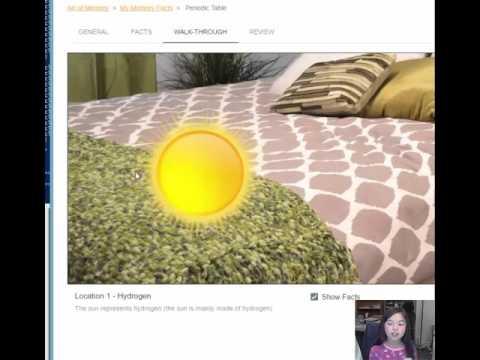 It depends on the palace and the degree of permanency you want. For most of mine, I am physically present in first person POV. I agree with Mayarra that adding touch and smell help massively. I also include actions. So I do something physical as I am recording, and it really sticks. For example, India is a bookcase in my study. When I encoded it, I crouched down to look under the bookcase to see a Bollywood movie being filmed there. I have only done it once, but that makes it impossible to forget that the bookcase is India. I would not do that for a temporary palace, such as using empty palaces in competition or for recording bird lists in the field, something that I do regularly.

P.S. Anything I say about competition must be understood as the voice of expertise arising from having just decided to compete and just started training and having never actually done it. So, no expertise at all.

Huh, thanks for the responses. I find it difficult to visualize from a first-person POV, but it sounds like it’s not strictly necessary.

I think of it as using the same system as one would use to recall what one did in the morning:

Or maybe similar to when someone asks for directions and I have to mentally walking through the directions in order to describe them.

I would experiment with trying to tap into whatever mental system you use when mentally recalling your navigation through spaces. Everyone probably does it a little differently.

No I don’t it looks like first person shooter game for me. I see object and move in quick line to another one. Something like google street view when you move but for objects. It’s not exactly teleporting but a quick moving line.
So like Josh put in video, rapid jumping basicaly.

The items in your palace are pictures. I just see the pictures. My body has nothing to do with it.

Hello Josh,
Do you still have the video?

Sorry about that. It was using outdated embed code. If you scroll up it’s in the post now.