Creating a PAO for Japanese

What do you think of creating a PAO for the japanese alphabet.

The way the japanese alphabet works is one sign one syllabels. If I create a PAO for every syllabel it would make learning a list of words easier. Right?

How many syllabels are there? Would this just be for memorizing words or phrases?

It has been a long while for me, so if you spot a mistake, please correct me.

There are a total of 71 traditional syllables in the jaapnese alphabet, plus 33 “combination” syllables. So there actually are multiple ways you can approach this.

An easy way is just 104 images. You can, however, use the syllable combinations as a way to have less images. This does however leave you with a need for more loci.

Basically, there are six single sound syllables. A, E, I, O, U and N/M (the sound is between N and M). Next there are at most 14 modifications of those sounds (going by the full list, which includes the likes of Da and Ji as individual syllables rather than modifications of Ta and Chi as they actually are).

Next there are combinations which adds -a, -u or -o to twelve of the thirteen of the -i syllables (ki, ni, hi, etc.) to create syllables like Kya, Nyu and Hyo.

So in the end, you can do with a 104 image PAO to make 3-syllable words, you can go with a 6P-14A-3O system to create a system for one syllable per locus, or anything in between. You could even put the -N/M sound in the objects as it rarely appears on its own, it is almost always behind another syllable.

This is very interesting. Can you link the full 104? Thanks

It appears I forgot one line of the combinations, which means there are 107 syllables and 12 combinations instead of 11 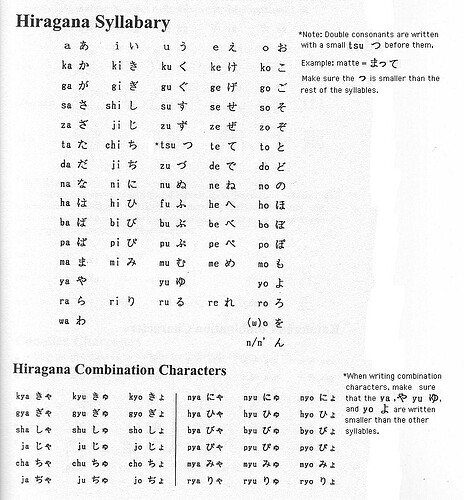 So in the end, you can do with a 104 image PAO to make 3-syllable words, you can go with a 6P-14A-3O system to create a system for one syllable per locus, or anything in between. You could even put the -N/M sound in the objects as it rarely appears on its own, it is almost always behind another syllable.

The big stumbling block I would have, even after creating pre-set images, would be taking a potentially long string of hiragana and tying it to a word. So take for instance the word うんてんする (untensuru.) This is a verb for driving. I would need to have two PAOs, then find a way to tie it to a meaning. You could use a memory palace to make it work, but I would personally prefer not to tinker around to make it work. I like the cue to be associated with the sound of the word, so that I don’t have search around through so many loci. So in my case, “untensuru” sounds close enough to “intense.” So I tied an image of intense driving to the sound. Personally, I thought of scenes from Redline.

The only stumbling block is you have to think of the “close enough” sounds. At times I had to get a little convoluted. So if you could make the PAO system work, that’s a definite advantage in that respect.

I assume 3 syllabe word per one image was meant. It’s not really a syllabe, but a mora. There are not very basic words in japanese with more than 6 mora, so in such case you could assume most words should be stored in max 2 images.

However that’s only about pronunciation, or rather writing using Hiragana or Katakana. To remember Kanji writing you may need several more images ( one word can be written using several Kanji or combinations of kanji and hiragana)