He is from Nepal and he holds record for memorising most words in 1 min. He is going viral in Nepal. He claims that he has made formula for doing this (https://m.youtube.com/watch?feature=youtu.be&v=-ekDznBPVCA). Here in this video people who didn’t believe him are checking him by giving him to memorize a book.

And there are a lot of interview and famous personalities of Nepal has also contacted him. So I didn’t think this is fraud.

But I am not in the state of believing what he does here in this video. He is memorising whole book about 250+ pages in less than 4 min.

I have a feeling that he won’t be able to do that with “other books”, books that he is not familiar with!

It looks like he already had memorised that book and during the video, he was just reviewing that book! Later he recalled the texts(a grammar book,it seems) with mnemonic techniques… I don’t think he will be able to do that with books that he hasn’t memorised before!

He told in his last interview he can do with any books . Seems like next to impossible but, he can . Maybe born talented

May be,he can…BUT it is very unlikely that he will be able to memorize ‘any book’ with that kind of
‘speed’, just at the first glance of the book’s pages(like he showed in the video)!

250+ pages in less than 240 seconds means he reads at least 1 page per second. Either that book has like 2-3 sentences per page or he is full of sh*t.

Agreed. I would love it to be true, but it’s extremely doubtful.

The onus is on the people making such extraordinary claims to provide real proof.

Unless He has super power like ‘krish’, I don’t think that’s possible

I consider those kinds of feats impossible until proven otherwise. I’ve never seen anyone who can do something like that, but I’ve seen numerous people who are able make others believe that they can do it.

Here’s another example of the trick: Derren Brown - Library; possible?

Celebrities are just people, and they are as susceptible to being fooled as anyone else, so I wouldn’t use them as a gauge.

There is a good documentary called Secrets of the Psychics with James Randi that is worth watching. It might be on YouTube or a similar platform. He made a career out of debunking claims about extraordinary superpowers, and the documentary gives a lot of interesting examples.

Impossible is a lot further away than people would like to believe.

If he is authentic then he will eventually provide evidence that others would accept such as participating in the WMC. Given he has done this kind of thing with random words too, that should be relatively easy for him.

I prefer believing he really made that feat rather than believing Jeffrey Epstein killed himself.

Uri Geller claimed he could bend spoons with his mind, but obviously he couldn’t and can’t.
Just because people claim to be able to do something, doesn’t mean they can.
Similarly, videos prove nothing, and neither do fans who claim it’s true even if they REALLY believe it (sincerity is not a good measure of truth).

That’s why careful tests under controlled conditions must be performed to verify claims.

I watched his face and his body language after he “pretended” to memorise the book at a speed that is not humanly possible.

If I had this ability, I wouldn’t be sitting down with the locals, or trying to impress the locals. I’d impress the government and get myself the highest paying job in the whole country.

I wonder what James Randi would say about this. He has ruined the careers of a lot of people around the world who pretended to have some kind of special powers. None of them so far could prove it.

A few years ago I followed James Randi’s work proving the world that these were all scams, this also triggers a thought and a question; In all of human history we have always heard about some people who had some kind of special inhuman powers, so were they using some kind of trick/s to fool people into believing them? I believe the answer is yes.

There may have been some exceptional people who did have some extraordinary powers, but as far as I know they all had some kind of less-ability as well. This guy in the video looked so normal to be a savant.

If I was him, I’d be careful trying to fool people, especially for financial gain, he may get arrested soon before he starts enjoying his money.

I would love to be wrong in my opinion.

Give him a Java programming book lol.

I’ve not seen that documentary Josh, but if you’re interested in “psychic’s secrets” and that sort of thing, check out Ian Rowland’s books on cold reading and cold reading for business. He also has made a career both as a psychic and as a whistleblower, but he gives you the techniques psychics use to read the personalities of their clients as well.

I can vouch for his work; the books are cheap and entertaining, real page turners, and I use his methods during business meetings (and on the ladies too, haha).

I want to say that I agree with you that it’s entirely impossible, but I’m a big-time optimist and I really think that if a person truly pushes himself, he can do the impossible too. Make something from nothing and all that, you know?

yeah it seems impossible. But there are a lot of interviews and videos regarding his ability. And he also holds he record for memorizing most words in 30 seconds.

Where is the information on the record he holds?

It’s mentioned here: 103 random Word in 30 second can you believe?

I think that more details are needed. It isn’t clear whether the record is for the names of objects that can be visualized or random words. Those two things have very different levels of difficulty. The certificate just says, “The Longest Sequence of Objects Memorized in 30 Seconds is 102 Words”.

It looks like records for that organization don’t have to be verified by independent arbiters, but only by self-selected witnesses.

If I could accomplish 1/10th of what is claimed (for example if I could credibly memorize a 250+ page book in 40 minutes), you can bet I would be inviting people to test me in the most thoroughly scrutinized fashion possible in order to ensure my claim is beyond all dispute.

Anybody who makes such a claim, but does not ensure the challenge is as tough as possible and the scrutiny extremely intense, is begging to be treated with total suspicion. 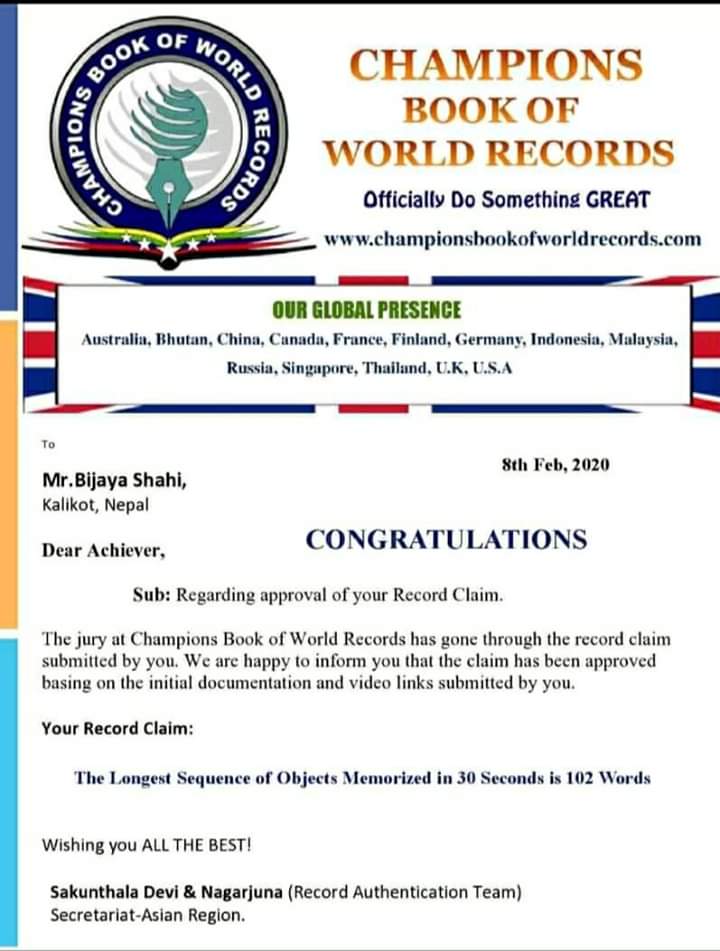