This tournament is open to any participants from all over the world. But it has its own specifics.

Russia MLC consists of three stages.
1st and 2nd stages - qualification, which is held on the website MemoryMan.ru

The third stage is finals the Russia MLC, the structure of which is similar to other MLCs.

Here you can read the full rules of the championship:

And below I will describe the main points of the rules.

Online tournament consists of three parts, each of which takes a week. Part 1 and Part 2 are qualifications on MemoryMan.ru. And Part 3, the final one is on ML.

We hold an online tournament every six months. This tournament will be the 4th in order. But this is the first championship that received the status “Russia MLC”

Applications for participation: The tournament is open, so everyone can participate. But initially the tournament was planned as a Russian one, so the language settings are limited:
As there were many applications from Poland, we added the Polish language to MemoryMan in the disciplines “words” and “spoken numbers”. We recently added English.

STEPS:
According to the results of the Part 1, the participants are divided into three categories: pros (elite division), amateurs (2nd division) and beginners (3rd division). We do this manually, basing on the results in the tournament and the known potential of the participants (in order to exclude the strong participants from falling into the weak divisions). All participants who have made their attempts go to the second stage.

Part 2 is the main qualification. The best performing competitors in each division go to Part 3.

SPONSORSHIP AND PRIZES
The tournament is completely non-commercial, and when there occur sponsorship funds, we direct them to the prizes in full. We do not know if there will be sponsors this time, but we are definitely planning to have some prizes.

All participants of the part 2 get e-certificates of participation indicating the category in which they competed.

These are the minimum prizes we want to make even if there are no sponsors.

INFORMATION SITES:
We broadcast previous tournaments live on social networks, the main of which was Ассоциация мнемоспорта России | VK. (This is the most widespread social network in Russia) And also on Facebook (Redirecting...) and Instagram (Login • Instagram), we are ready to simultaneously announce everything related to the tournament at AOM.

We post all information in open sources on our pages in social networks. We also regularly have live broadcasts with reviews of the results during the tournament. The main platform for live broadcasts is also Ассоциация мнемоспорта России | VK, the main broadcast language is Russian, as is the audience. Anyway, we can help with the translation during the communication between Russian and English speaking participants.

In the Part 2, a mandatory requirement is to play with the camera live (as in SLAMs on ML).

If you are ready to join us, you are welcome!

Hello, @zonjan! It will be great if you inform the guys from Poland about the tournament. We have tried to add polish to our platform.

As far as I know, there may be a very limited word base on the IAM site. On MemoryMan.ru we have chosen the following formula for compiling the base: 7000 concrete nouns, 1000 abstract nouns, 1000 verbs, 1000 adjectives. If you can prepare such a word base, I will send it to the programmer. There is a chance to be in time for this tournament

At stage 2 you should memorize 50 words
Is it possible to add another one which isn’t dependent on the language ?

Maybe 4 discipline and take the top 3

sir,is the scores we get in stage 1 and 2 before oct 11 will be accounted or it will be refreshed??

Hello vishvaa! Yes, the results table will be cleared before the start of the tournament.

We would not like to change the rules now, on the eve of the tournament.

But this is a great idea for next time. Perhaps this will happen very soon (in the middle of winter).

And by then we will be able to add Arabic to the platform.

Hello everyone! Round 1 of our tournament has started today.

At the moment we have 103 registrations from 10 different countries of the world!

The first phase will continue throughout the week. And at the end we will publish the results and divide the participants into three divisions.

We wish good luck to all memory athletes!

Going to have to read this!

do you mean Cyrillic?

The first stage of our tournament ended 2021-10-17T09:00:00Z. 58 people passed to the second stage and were divided into three categories. Below will be tables with the results of the first stage already for individual categories.

Qualification results and list of Russia MLC finalists.
We are waiting for good news from @Simon @Issa @Josh 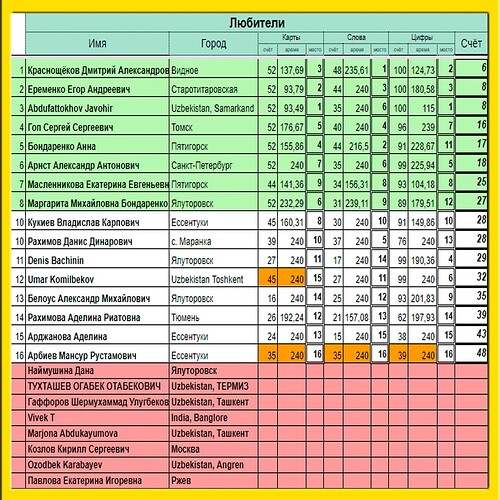 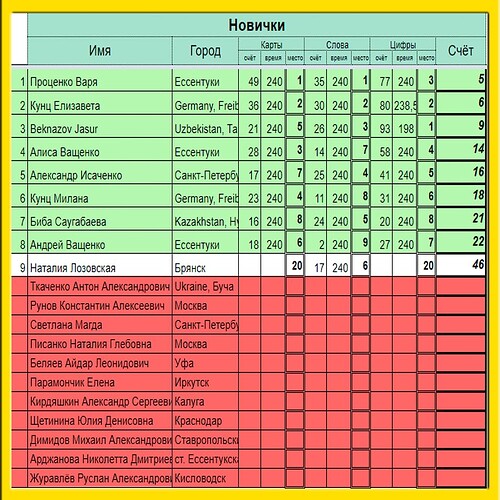 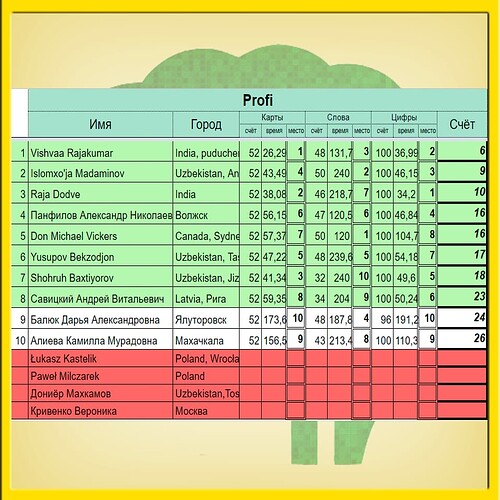 @Ilya_Gubenko
You mentioned my speed time in numhers is wrong, you have to correct it. Check it out again (that’s 34.2 is vishva’s time actually not mine)

Note - I have 1 another question where is don and islomxoja 50 words memorization in memoryman ru website ranking, I didn’t see them in ranking list in words (when they did 50 words??)

You just have to follow our social networks so that you have all the details of the results and rules. You know the rules and where the confirmed results of the participants are stored.

We apologize for not being able to duplicate here every action that happened during the championship. We don’t have such a big team

Alright , It’s my final time saying to you. After this in my entire life I will not send you a single message .

So because your team is short, and you forgot to mention my correct number time, now you saying you will never correct that ?

Is it correct now? 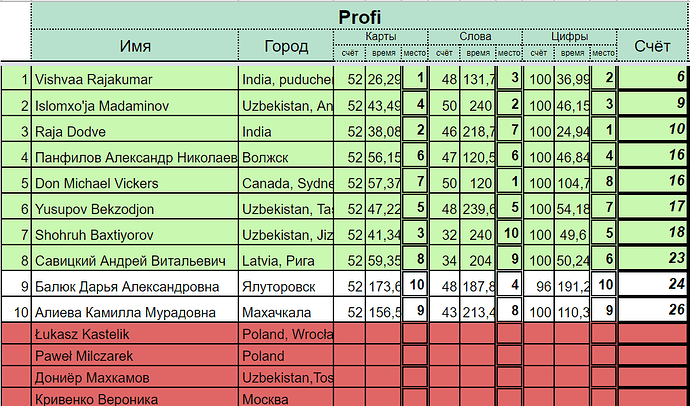