Registration for the Asian-Oceanian Open is now open! See the World Tour page on the Memory League site for information and to register.

Cool, any plans when The Qualification finals will be?

-Since the Main event is going to be held in August.

This is assuming it would look similar like the last SLAM event.

Yes, that’s the plan for the qualifiers.

Hi Simon,
Today I looked at the World Tour ranking again and I spot something which I didn’t notice before.
Braden Adams and Naoki Miwa reached quarterfinal in the Pan-American slam like me but they got 200 points more. Both of them were playing in division 2 las season, now Braden plays in division 1.
The best four results of the 3 slams and 3 leagues counts. Now let’s imagine that Braden stayes in division 1. His results from season 11 will not count. Finally he can end up with the similar score as other people in division 1 but with additional 200 points because he started from division 2.
There is also exact situation with Jan-Hendrik Büscher and Abraham Saynes Jarquín. They both lost in the first round of the slam but Jan got 200 more because he was in lower division and now he is playing in division 1.
And one more. Simon Reinhard and Katie Kermode. Katie got 950 and Simon 750, why this happened? They lost in semifinal and they are from division one.
I hope it is not too late to discuss it again and change something.
Best regards
Jan

Is this because Braden, Naoki and I played in the qualifiers for the Slam?

hm, Yes that makes sense now, thank you.
But I still prefer system with equal points for equal places. This leads to the possible ridiculous situation of a good player skipping one league and winning knockout tournament with +200 points and then playing another 2 leagues normally and not loosing anything.

Simon wins but gets the same amount of points. 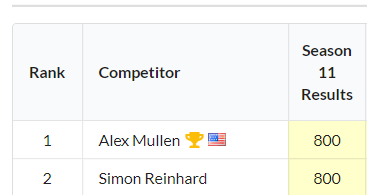 Possible scenario of a World Tour

Regarding the points differences: I think the initial idea was that the sum of

would never be higher for someone who played the qualifier compared to someone who qualified directly as part of the top 10. You can see that on p. 23 of the Rules: the tier SSL 7 to 10 get 350 points for that, while the next tier (11 to 16) get 125 points. Since the winner of the Qualifier gets 200 points, the most someone who played the qualifier can get is 325 (125 + 200) which is still less than 350. And since someone in the SSL top 10 cannot play the qualifier, double points should not be possible in that regard.

But I think there might be a problematic scenario because currently the points you get for the Slam qualifier are summed up with the points you get for the Slam and not with the points for the SSL scores (see the columns at Memory League). And since the Slam points are a separate block from the season points, that might indeed open up the possibility that someone, in particular in the third season when they might only need one more good result, could think to skip the season and “boost” their Slam points by also playing the qualifier. I think the easiest way to remedy that, without changing anything regarding the current total points that early in the Tour, would be to follow the initial rationale and add the Slam qualifier points to the season score (SSL) points and not to the Slam points. With a superficial glance, that might seem unusual ("but it is a Slam qualifier, right?), but: a) it fulfils the purpose of avoiding someone being able to stack up more points than intended and b) the season scores also have as a major purpose to be a qualification system for the Slam, so it seems also useful in that regard.

@Simon , what is your take on that?

@zonjan And that Alex has the same amount of points as me for season 11 has its reason in the fact that he lost to Byambaa who admitted to cheating. According to my understanding, it was then decided by Simon Orton that Alex, since his opponent Byambaa had cheated, would get the win in that semifinal. And since it was also decided to replay all the finals matches, the goal was to avoid that Alex (or Andrea, for that fact, who had also already qualified for the final) would be potentially worse off than they would have been without a replay. Thus Alex also got the points for reaching the final.

friends,how to register in under 18,i gave my gmail id.but dont know what to do next? : (

@Simon I registered today, paid and also got the changed message in the “registration box” but now the box again shows the option to register. Did my registration go through?

@SimonReinhard sorry about that - yes, all is fine and you should now see a message that you have registered.

Thanks @zonjan and @SimonReinhard. I have changed the 2nd column in the World Rankings table to “PAO Qualification”, which is the sum of the Season Scores points and the PAO Qualifiers points.

We are pleased to announce that the Asian-Oceanian Open will be part of this year’s Mind Sports Olympiad (MSO), in addition to being part of the Memory League World Tour.

For more information about the MSO, see the website: 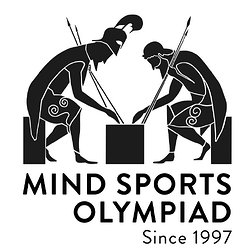 Small reminder to people of previous ML seasons and competitions that you have ~1 week left to register, if you want to participate in the Asian-Oceanian Open. Registration is as always done through the ML World Tour website.

Post number 2 since I’m not allowed to tag that many people at once.

Post number 3 since I’m not allowed to tag that many people at once.

I haven’t a laptop

I haven’t a laptop

I am facing the same problem, I haven’t laptop , that’s the thing I am apart from the competition.