As you can see in the screenshot, it was 2:38 AM and I was tired as heck but I decided to try a power calculation. It took me 18 minutes, I almost fell asleep while calculating! 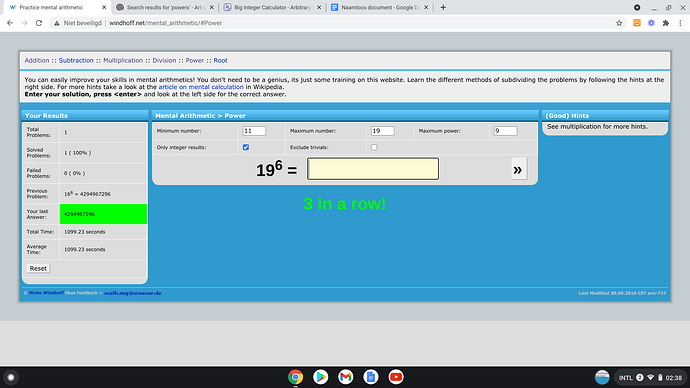 By the way do you often sleep that late?

Yea, my sleep schedule is all over the place. I don’t know why but I have always had trouble sleeping. Some times I cannot fall asleep, other times I can only sleep for 4/5 hours and then I wake up for no reason. I also have sleep paralysis, it runs in the family. When I am stressed I also have many more nightmares, right now I have a nightmare almost every day, this can really exhaust you as well. I haven’t woken up fully rested in almost a year.

Thanks for the reply!
I also had serious insomnia till this month, @Benjamin1990 has helped me a lot.
Take pills, routinize your sleeping time, avoid stimulations during the night and if necessary see a doctor.
Don’t give up and I believe things will get better.

@albinoblanke , great calculation! And great that you were able to calculate this with full accuracy!

How did you do it?

You know I did this the hard way

Yea, my sleep schedule is all over the place. I don’t know why but I have always had trouble sleeping. Some times I cannot fall asleep, other times I can only sleep for 4/5 hours and then I wake up for no reason. I also have sleep paralysis, it runs in the family. When I am stressed I also have many more nightmares, right now I have a nightmare almost every day, this can really exhaust you as well. I haven’t woken up fully rested in almost a year.

My girlfriend, who is autistic, has the exact same thing. She recognises every symptome you have!

I didn’t know that was possible!

My girlfriend, who is autistic, has the exact same thing. She recognises every symptome you have!

I make noises when I have a nightmare and my girlfriend wakes me up when she hears me. This way I don’t wake up in panic. Waking up in panic and full of adrenaline completely destroys me the next day.

Schizoid (do not mistake for Schizophrenia) with Generalized Anxiety Disorder here.

I will start therapy this month of April.

@Kinma your girlfriend is autistic? And yours too @albinoblanke?

And, by the way, your great and impressive calculation amazing me, @albinoblanke. Veery nice.

To keep all these numbers in mind for “normal” people will be very difficult.

@albinoblanke was born this way.

@albinoblanke whats kind of Autism do you have? Im not very versed in Autism, but I will rule out Kanner’s Autism and even Asperger. However, I can be wrong.

My diagnosis took time, I was confused to have Schizoaffective Disorder due to my lack of motivation. Despite their formation, psychiatrists are humans and make mistakes.

Back to the power calculated, thanks @Kinma for instruct the way of calculating it.

Autism is a spectrum. However DSM-5 does have “levels of autism severity”. Level 1 is for those who require some support, can live independantly and their symptoms are not overly obvious. Level 1 is often called high functioning.

Level 3 requires a lot of support and have severe symptoms of autism. They have a very difficult time socializing, often can’t speak and often have an intellectual disability. They are often called low functioning.

I lean towards the severe type. I was not given a level when I got my diagnosis but if I had to guess then I am probably level 2. My symptoms are very obvious and I experience a lot of difficulties in communication.

However you have a girlfriend! I think she can help you.

You can be social, despite your lack of understanding social situations.

Instead, Im affected by the most severe coldness.

Everyone with his own issues. I admire your memory ability, mate.

@Kinma your girlfriend is autistic?

Yes. I seem to belong to a very select group of people who understands her and have no problem with het autism. For example, I understand her being overstimulated from time to time.
@albinoblanke, I am sure you can relate.

Personally, I am borderline autistic. Meaning I have some of the symptoms, but together it is not pronounced enough to be diagnosed as one. I also don’t have a lot of the problems that other autistic people have.
I am very social, I can and will talk to anybody about anything.
From my symptoms and behaviour, I come close to a level 1 autist.

Because I consider myself borderline autistic, this may be the
reason I understand my girlfriend so well!

Very nice you understand your girlfriend so well

My girlfriend has level 1 severity of autism.

She is very social too and can talk to anyone about anything. However, she faces difficulties in other areas. For example, she is not good at dealing with pressure. I am always the one who has to do the groceries because she can’t handle that. When we are driving to a new location she has never been to and I tell her to turn left, she might actually turn right because of stress and pressure.

And there are still some social deficits as well. Right now her biggest problem is maintaining friends. For some reason people don’t stick around. I think people take her for granted which is sort of backed up by the fact that some people in the past have taken advantage of her. She is a very sweet person who doesn’t like friction. It could be that this ‘lack of friction’ is the reason people don’t stick around. However, it is definitely the reason why people take advantage of her.

It is also the reason I fell in love with her 7 years ago. I saw her sweetness and purity, before we even talked. I always say that she is my diamond, she doesn’t understand why but it is because she has certain qualities that are very very rare in people. It could be because of her autism but that doesn’t matter to me.

I think us neurodivergent people have such pressure, I feel it, but mine isnt so hard as you and your girlfriend can have.